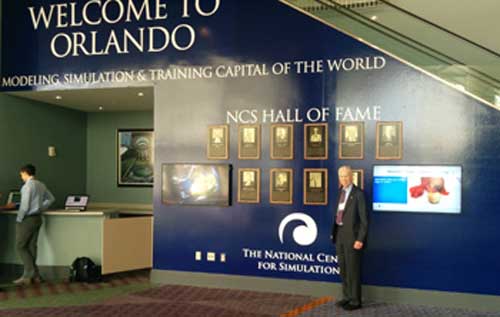 Last spring, with the induction and celebration of the first National Center for Simulation Modeling and Simulation Hall of Fame class, Orange County Government, including the Office of the Mayor and the Orange County Convention Center (OCCC), wanted to share in the excitement of the newly formed Hall of Fame, and offered to allocate a special wall to pay tribute to the pioneers who helped to lay the groundwork for M&S. 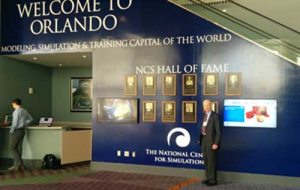 This month, the NCS “Wall of Fame” was unveiled to the thousands of attendees and participants of this year’s Interservice/Industry Training, Simulation and Education Conference (I/ITSEC), Dec. 1-5. The wall, which is located adjacent to the anticipated 6,000-square-foot Destination Lounge in the south concourse of the OCCC, boasts the billion dollar MS&T industry in Central Florida, the important work and collaboration of Team Orlando, and of course, the individual plaques commemorating the charter class inducted in the 2014 Hall of Fame.

“We are extremely honored to have the support of Mayor Jacobs and the Orange County Convention Center as we continue to tell the story about the Modeling and Simulation industry, and its impact on our state’s economy here in Central Florida,” said retired Lt. Gen. Thomas L. Baptiste, president and CEO of the National Center for Simulation. “Anyone who visits the OCCC, whether from the MS&T industry, like the I/ITSEC attendees, or those from other industries, will have the opportunity to see this Hall of Fame wall and those individuals we honor for their significant contributions in the field.” 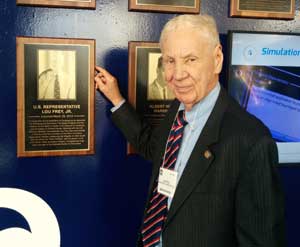 “I still can’t believe that I am included with such a prestigious group,” Frey said after seeing his Hall of Fame plaque hung along with the other nine inaugural members.

Former Congressman Lou Frey, an early supporter and good friend to the MS&T industry, had the opportunity to attend I/ITSEC and see the completed NCS Hall of Fame wall for the first time.

“I still can’t believe that I am included with such a prestigious group,” Frey said after seeing his Hall of Fame plaque hung along with the other nine inaugural members. “It is truly an honor to have been selected as an NCS Hall of Fame member. The growth of Modeling, Simulation and Training industry was just beginning when I jumped in to champion the push for the Navy to stay in Central Florida, and now our area is a national MS&T treasure.”

The Hall of Fame was established to honor men and women who have made significant contributions to improve, change or enhance modeling and simulation in any of the disciplines included in its diverse use. The first ceremony was in March 2014, and NCS Board of Directors members are currently reviewing applications for the 2015 class, expected to be inducted in late spring 2015.