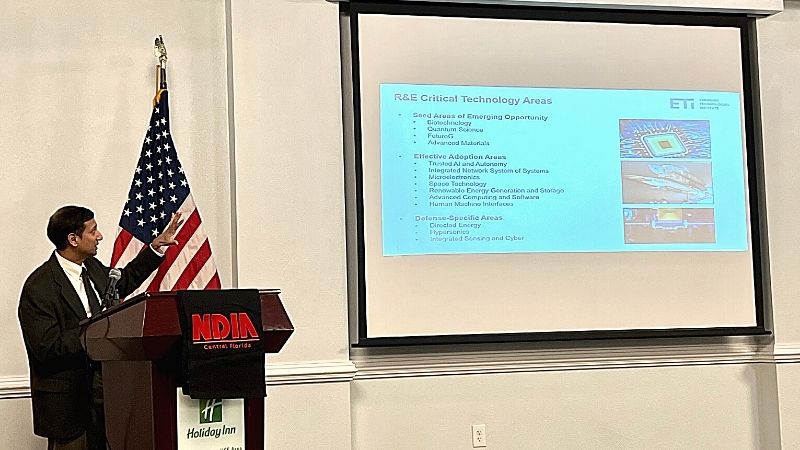 Formed nearly one year ago, NDIA’s Emerging Technology Institute is a non-partisan organization dedicated to research, analysis and open discussion about emerging technologies and their role in the defense industrial base. According to the NDIA website, the institute leverages the vast resources of the organization and its network of industrial partners and individual members to be the premier source of trusted information for decision-makers in government and industry on the technologies that are essential to the modernization of U.S. armed forces.

Dr. Seraphin began his role as ETI Deputy Director eight weeks ago.  With ETI, Seraphin hopes to elevate critical technologies for government investment, and to initiate a system of investing that is good for both the government and the people actually doing the work. Additionally, he noted the importance of finding ways to most efficiently route those technologies into products for conventional operators.

Seraphin has extensive experience working with the Department of Defense and Capitol Hill. In addition to his position with NDIA, he currently serves on the U.S. House and Senate Armed Services Commission for Programming Planning, Budgeting and Execution – a congressionally mandated commission that examines more efficient alternatives to the budgeting process and develops policy recommendations that will enable the Defense Department to rapidly field operational capabilities and outpace America’s near-peer competitors.

Seraphin previously served as a professional staff member on the United States Senate Committee on Armed Services where his areas of responsibility included acquisition policy, Pentagon management issues, Department of Defense’s science and technology programs, information technology systems, technology transition issues, defense laboratories, Small Business Innovation Research program, manufacturing programs, and test and evaluation programs. He also served as the Principal Assistant Director for National Security and International Affairs at the White House Office of Science and Technology Policy where he was responsible for developing and implementing White House initiatives and policies in areas of defense research and engineering; weapons of mass destruction; defense manufacturing and industrial base; science, technology, engineering , and mathematics (STEM) education; cybersecurity; and promoting innovation in government research and engineering organizations. His career also includes service to the United States House of Representatives Committee on Science’s Subcommittee on Research, the Office of Senator Joseph Lieberman, and the Science and Technology Division of the Institute for Defense Analyses.

Dr. Seraphin plans to use his experience on Capitol Hill and his unique position with NDIA to pull together common themes and issues to present to Washington lawmakers and Pentagon leaders to help change behaviors.

“I think we’re in a position to tap into this community to go pretty deep technically into something to portend a technical solution or recommendation,” Seraphin said.

He believes there are technical areas with common themes for example, the challenges of doing basic research in a defense environment, growing a small businesses, dealing with classification issues, and export controls.

“We can be a connective tissue representing some of these challenges to these faces in Washington,” Seraphin said. “I think we’re in a position to try to do something. I think the other thing that we’re trying to think about is making use of NDIA’s trusted relationship with DoD.”

More specifically though, ETI’s goal is to look at things with some technical rigor with the mindset to support the DoD, industry, warfighter, and taxpayer.

During his time as a staffer in Congress, Seraphin described having a full bookshelf of strategic plans and reports, which he occasionally viewed. “But what was more useful for me,” Seraphin said, “whether I was in Darfur, or the White House, or the Hill, was when people who actually knew what was going on on the ground could tell me, ‘Do this, fix that, or change that.’”

And that’s how Seraphin believes ETI can serve the defense industrial base and the warfighters on the ground – by being a voice for them on these common emerging technology issues with leaders and policy makers in Washington.

“I’ve found that it’s easier for DoD to talk to a NDIA group than it is to talk to any individual company,” he said. “It’s really an opportunity for those government people to hear firsthand what some of the challenges are, and in a closed environment, take some recommendations.”

One issue Seraphin wants to address from the perspective of emerging technologies is industrial base vulnerabilities.

“What kinds of things should the government be doing to strengthen our defenses and more importantly, grow them?” he said.

Seraphin recommended reading the NDIA Vital Signs Report, which he views as the warning signs that the government and industry should think hard about.

Seraphin also noted that the ETI is currently hosting podcasts which so far have covered the role of digital twins and 5G, the adoption of artificial intelligence, military modernization challenges, and the impact of digital engineering, to name a few.

“Taking on these subjects,” Seraphin said, “helps us understand the industrial base we’ll need years from now and determine the steps that should be taken now to make sure we’re in a better place in industrial technologies to get there.”