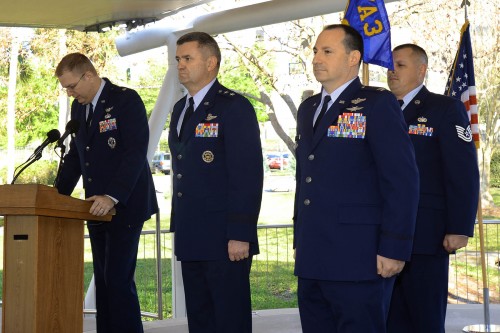 Following the traditional military ritual of accepting the organization’s flag as a symbol of its members’ loyalty and trust during the assumption of command ceremony, Colonel Robert H. Epstein became the 10th commander of the Air Force Agency for Modeling and Simulation (AFAMS). The ceremony, which dates back to the 18th century, was held at Central Florida Research Park’s Warfighter Park in Orlando, Florida on March 20, 2017.

“Today I have the opportunity to brag about, publicly, what AFAMS does. Sometimes when a ceremony involves a squadron, group or a wing, raw man power results in a lot of accomplishments to talk about,” West said. “Here the manpower may be different, but this agency punches well above its weight and has reached to the highest levels of the Air Force. AFAMS’s work will underpin development of realistic, integrated, secure and cost effective training.”

“Rob Epstein is exactly what AFAMS needs; a commander with exceptional leadership skills, significant operational experience, and the ability to forge relationships that make organizations successful.” Maj. Gen. West also acknowledged that command was a team sport, and that spouses enable commanders to be at their best, referring to Col. Epstein’s wife, Lisa.

“My family and I are excited to be joining AFAMS and Team Orlando!” Col. Epstein stated. “We

[as a Service] no longer have the money or ability to keep doing things like we used to. Today’s threats are morphing, adapting and becoming more lethal. Being ready to deal with these threats will be essential.” He closed stating, “We don’t fight alone, so there is no reason we should be trying to solve these challenges as individual services.”

Col. Epstein will be responsible to oversee the Air Force initiatives for enterprise solutions that will help build an efficient foundation to achieve Readiness Thru LVC, and allow warfighters to maximize their performance and decision making. Before assuming AFAMS command, he served as a Joint Staff Officer who has held various operational, test and staff assignments and is a Navigator and Electronic Warfare Officer (EWO) who has flown in support of numerous operations. Additionally, Col. Epstein was the Chief of Joint Fires for the NATO mission in Afghanistan in 2009 and Chief EWO for NATO’s combat mission in Libya in 2011. He has commanded at the squadron level, and prior to his current assignment, served as the Director of the Commander’s Action Group and Section Commander for the Air Force District of Washington (AFDW) and the 320th Air Expeditionary Wing, the air component of Joint Task Force – National Capital Region, in direct support of the 58th Presidential Inauguration.

The ceremony ended with an informal reception, giving Col. Epstein the opportunity to meet all the distinguished guests, colleagues and acquaintances.