New AFAMS Commander: We Will Ensure the Warfighter is More Ready and Lethal

Home » New AFAMS Commander: We Will Ensure the Warfighter is More Ready and Lethal 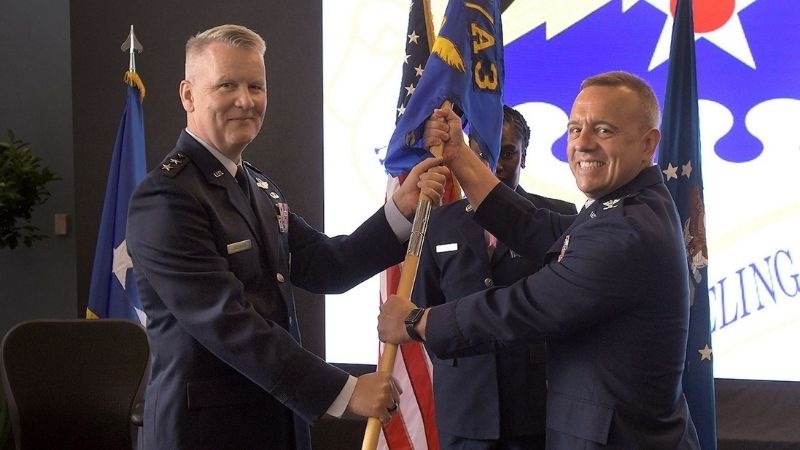 Major General James A. Jacobson presided over the ceremony, which welcomed both colonels’ families and friends, distinguished guests, team Orlando leadership, and representatives from the modeling, simulation and training industry.

“General Jacobson, I appreciate the trust in me leading such an amazing and crucial organization,” began Beers, after coming to the podium to address the audience. “I’m grateful for this opportunity and your kind words. And as you mentioned, this is by far, the easiest sell I’ve had to make to my family.”

Beers thanked Epstein for “turning over such a high-performance team,” and joked about keeping an eye on Epstein’s career throughout the years. “I have to confess, I may have been stalking you for the last couple of years and I was literally running out of assignments to take waiting for you to retire,” he joked. “I’ll do my very best to honor you and keep AFAMS in an upward trajectory.”

Following his remarks to Epstein, Beers thanked both family and friends who were in attendance for the ceremony. He then addressed his new AFAMS team and the Team Orlando community.

“I’m incredibly excited about this assignment and working with you. Perhaps more now than ever, modeling and simulation is at the forefront of importance to national defense, and hyperactive synthetic training environments are increasingly vital for both test and training measures,” he said.

“In a global environment characterized by a return to near peer competition, our mission today is to support and facilitate integrated, realistic, and efficient training across war fighting domains. The Air Force depends on AFAMS to deliver war fighting capabilities now and in the future.”

Beers added that having AFAMS with Team Orlando, enables them to fully leverage and take advantage of cutting-edge technology, programs, and development.

“While there is always a propensity to focus on something new and shiny, our collective mission is, and always really should be, about providing ready forces. And that’s about bettering people, not the things, not the technology,” he said.

In closing, he quickly highlighted what his plan looks like going forward.

“We must deliver in the form of the speed of relevance; be the benchmark for effectiveness and efficiency; drive discipline and affordability; and streamline rapid, iterative approaches from development to fielding,” Beers noted.

“Let’s continue expanding our innovation culture, focusing on raising awareness, and participating in next generation modeling and simulation environments, new technologies, and partnerships with other services, academia and industry.” He also said AFAMS will remain focused on strategic communication, experimentation, adaptation, and calculated risk-taking.

“Bottom line, we will ensure the warfighter is more ready and lethal.”

Beers said he looks forward to being a part of Team Orlando and AFSMS. “It’s a privilege to tackle these challenges with you. Any fight. Any time.”