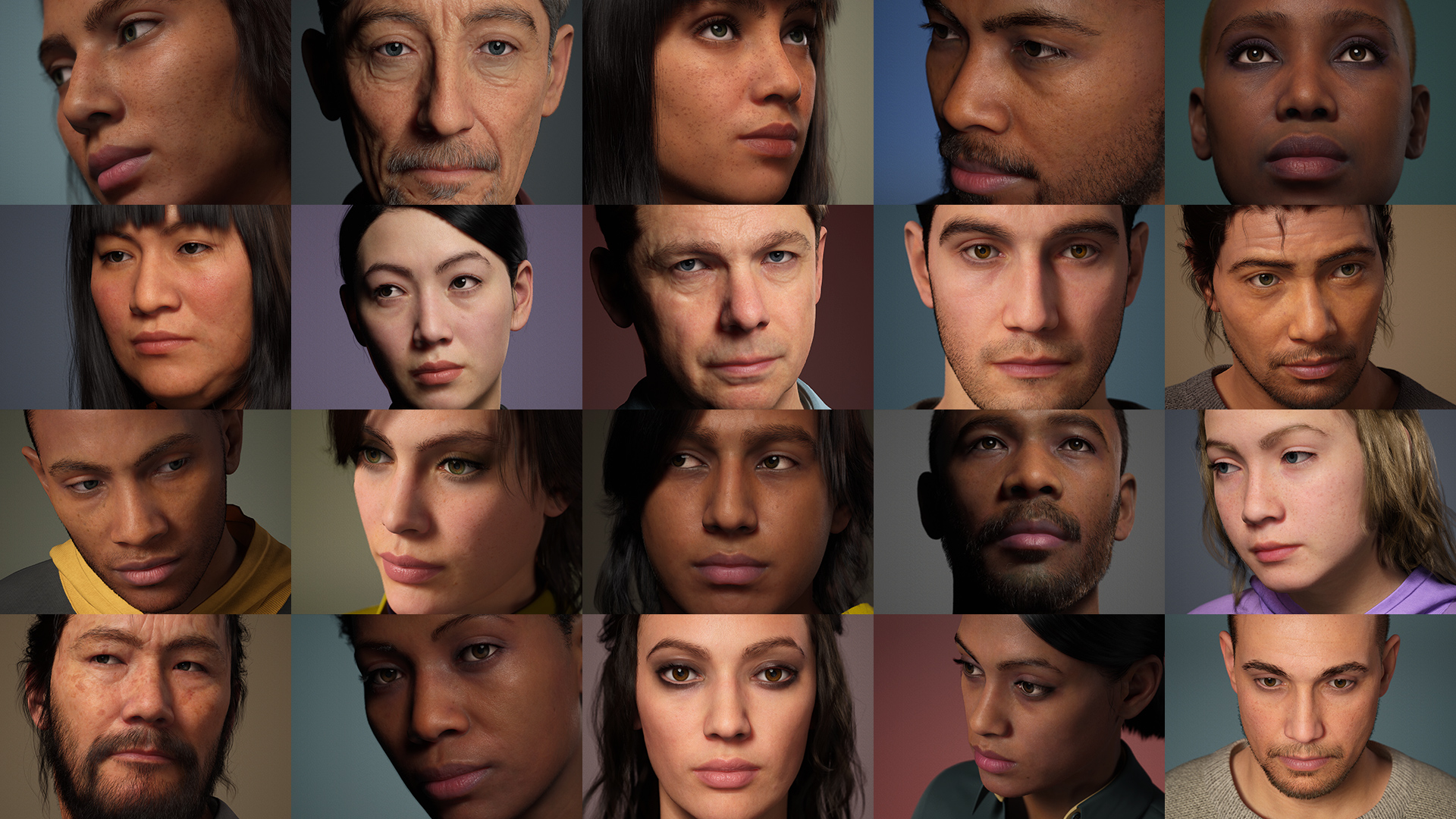 Following on from the buzz of the Unreal Engine 5 release in April, we’re happy to announce a new release for MetaHuman. While still in Early Access, this release brings not only new features for MetaHuman Creator—our cloud-based app that empowers anyone to create photorealistic digital humans, complete with hair and clothing, in minutes—but also an exciting new Mesh to MetaHuman feature in Unreal Engine, as well as support for the new character rigging, animation, and physics features in UE5.

The first major feature of the new MetaHuman Plugin for Unreal Engine, Mesh to MetaHuman, enables you to take your own custom facial mesh and convert it into a MetaHuman, fully rigged and ready to animate. You can even further refine your character in MetaHuman Creator.

Starting with a textured mesh that you’ve created using scanning, sculpting, or traditional modeling tools, Mesh to MetaHuman uses automated landmark tracking in UE5 to fit our MetaHuman topology template to it, combining it with a body type of your choice from the MetaHuman options. This templated mesh is then submitted to the cloud, where it is matched to a best-fit MetaHuman derived from our database. This mesh is then used to drive the facial rig, while the deltas from your original mesh come along for the ride.

Now that you’ve transformed your mesh into a MetaHuman, you can immediately download it, or open it in MetaHuman Creator, where you can play through the animations and see it instantly come to life, and continue to tweak and enhance it.

While some elements like hair and skin textures will need to be reauthored or reapplied either in MetaHuman Creator or within the tool of your choice, Mesh to MetaHuman means you can get a starting point for a fully rigged digital human from your unique static mesh in minutes. That’s an exciting prospect!

You can download the MetaHuman Plugin for Unreal Engine below, and check out the tutorial to find out more about how it works.

Unreal Engine 5 came with a slew of new character rigging and animation features, including artist-friendly authoring and retargeting toolsets; with this release, you can use them all with your MetaHumans.

MetaHumans are built on top of Control Rig, Unreal Engine’s built-in rigging system that enables you to quickly and easily create rigs and share them across multiple characters. In UE5, Control Rig is now production-ready, and offers a range of new features such as Space Switching, which enables you to dynamically reparent your Controls to suit different circumstances.

Control Rig is integrated with Sequencer, where you can animate your characters, and save and apply poses with the new Pose Tool; it includes a number of new facial poses that have also been added to MetaHuman Creator—keep reading for more on that.

UE5 also offers an entirely new artist-friendly toolset for retargeting animations. Since MetaHumans come complete with IK rigs, it’s something they can take full advantage of.

Using IK Retargeter, you can quickly, easily, and robustly transfer animations between all MetaHumans and other characters, even if they have different body proportions. MetaHumans are now compatible with both UE4 and UE5 mannequins, opening up access to thousands of existing animations on Unreal Engine Marketplace. With a few mouse clicks, you could easily replace the mannequins in the Lyra Starter Game with your MetaHumans, for example.

Another new feature, IK Rig, enables you to interactively create solvers and goals that perform pose editing for your skeletal meshes. A common use case is to adjust a character additively while maintaining the existing animation, such as having your MetaHuman always look at a particular target while walking along.

With Chaos now the default physics engine in UE5, MetaHumans ship with active ragdoll physics—they’ll target believable poses and even try to protect their heads when tumbling! We’ve also added a new level to the MetaHuman Sample project that demonstrates how to use the new physics assets and ‘get up’ animations with your Unreal Engine project.

Last but not least, since Quixel Bridge is now integrated into the Unreal Editor, adding MetaHumans to your UE5 projects is simply a matter of a couple of clicks. It all adds up to more believable real-time animated characters in less time.

Whether you’re refining your own custom MetaHumans or creating new ones from scratch, you’ll benefit from some fun and useful new features in MetaHuman Creator.

First off, there are ten new facial animation loops that you can use to instantly bring your creation to life. These are great for evaluating how well your character’s deformations perform with different expressions, without having to download it first.

With similar intent, there are six new body poses to put your character through its paces—everything from being caught in the middle of a high hurdle to trying out a contemporary dance move—and five new facial poses that run the gamut of emotions.

If you don’t like your characters to blend in with the MetaHuman crowd, you’ll appreciate more clothing options, including the ability to customize colors of areas within fabric patterns, such as polka dots, stripes, or paisleys.

Finally, to give you more control and offer more variety over your characters’ hair, we’ve added 13 new hairdos, together with additional styles of beards, mustaches, eyebrows, and eyelashes for a total of 23 new grooms. We’ve also enabled you to further customize their colors, with Ombré and Highlights features, and the ability to separately color different areas of the Mohawk, Faux Mohawk, and Pulled Back styles. Together, these options offer you a whole new range of looks for your MetaHumans.

Some months ago, we made six lighting presets from MetaHuman Creator, designed by award-winning cinematopher Greig Fraser, available for use in Unreal Engine. Now, we’re adding to that pack, with the three lighting presets designed for The Matrix Awakens: An Unreal Engine 5 Experience. We’ve also updated the original six presets for compatibility with UE5. You can download the updated lighting pack from the Marketplace.