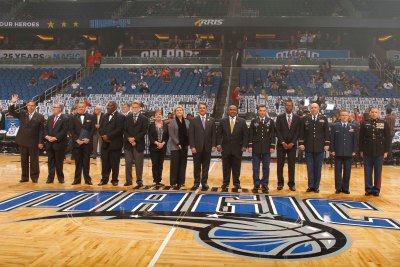 Seven central Florida mayors, on behalf of communities across the region, signed a covenant representing a commitment by the community to provide support to the U.S. military and military families. The event took place during an Orlando Magic home game on Nov. 7, as part of their Seats for Soldiers program, with representatives from Team Orlando being honored.

Although the Community Covenant began as an Army program in 2008, the Department of Defense adopted the program to strengthen ties with communities across America. At the same time, many communities decided on their own that they should support military personnel of all services and their families. The covenant is a non-binding, largely ceremonial document of support, but helps give communities structure and resources in developing their local efforts.