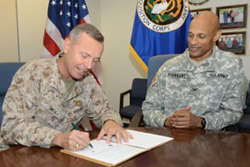 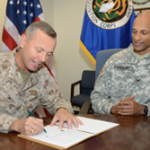 Former President Bill Clinton acknowledged Orlando on live television as America’s example of common-sense economics. The unsolicited pats on the back is a direct result of government, industry and academia working together. Furthermore, Team Orlando’s uniqueness is gaining more and more national attention as people start to realize the collaborative efforts contiguously happening are their own aspiration. “Team Orlando hasn’t received a request from the Department of Defense to do business with one another,” stated Kent Gritton, Director, Joint Training Integration and Evaluation (JTIEC). “The board of directors was formed voluntarily and for the purpose of sharing information, technologies and ideas to save everyone time and money. Team Orlando was formed with the intent of providing the most realistic training our warfighers can receive, second only to the real thing.”

Team Orlando is led by an Executive Board of Directors consisting of the senior leaders of the Army, Air Force, Navy and Marines modeling & simulation organizations located in the Research Park. The Executive Board provides cross cutting guidance to the Team Orlando Board Of Directors for execution.The Team Orlando Board is composed of members representing all four of the DoD services and other federal agencies such as the Advanced Distributed Learning Initiative, as well as academia through the University of Central Florida and industry by the National Center for Simulation.)

During his praise of Team Orlando, President Clinton described the importance of America focusing on the nexus of what the future should bring and how it is vitally important to form partnerships between government, Non Government Organizations (NGOs) and private industries enhanced with a strong academia research component. The investment of collaboration makes good business sense producing a stronger product and saving billions of dollars.

President Clinton posed the question, “What good do we want”? Whether it’s Global warming, curing cancer or cutting our energy bill, we must get it straight from the beginning. He states that Americans tend to fix things when they get comfortable or when they are in trouble when instead they should, at every income level, maximize impactful thinking in the very beginning. In his opinion, it’s time for the government, the private sector and NGO’s to strongly look at setting egos aside, trust more and be open to working together.

Why is Orlando receiving the national buzz as an example of success? “Orlando and Central Florida are the epicenter for modeling and simulation,” said Tom Baptiste, Executive Director, National Center for Simulation. “When you combine the power of the Research Park, our close ties between a world class university, industry, and Team Orlando DoD commands and organizations, we produce a synergy found nowhere else in the world. Companies who want to be serious players in the modeling and simulation industry need to consider focusing their efforts on Orlando and Central Florida.”

President Clinton stated the 190+ computer simulation companies that have broken ground here and continue to prosper, are providing the best possible realistic training in existence. The collaboration of government, academia and industry creates an economic engine that benefits the region, Team partners, and most importantly the warfigther. He closed with this statement, “When groups work together they are so much more powerful than when they sit around separately and fight about something. It’s not ideology, it is hard work with keeping one eye on the competition. This is what America needs. Not mindless fact free fighting.”