Otronicon, presented by the Orlando Science Center, is an annual conference that brings together the entertaining world of consumer video games with a behind-the-scenes view of the art, technology and science that form the foundation and the future of both the video game and simulation industries.

Dr. Kristy Murray, Team Orlando’s STEM Advocate and a member of the Otronicon Advisory Team, said that Team Orlando was thrilled to have the opportunity to be a part of the 12th year of Otronicon.

“This event brings together leading technologies from multiple industries and uses it to engage kids of all ages to take an interest in science, technology, engineering and mathematics,” Murray said. “It’s also a great and unique way for organizations and companies, like Team Orlando, to share some of the ways we are utilizing technology for learning and training. We are so happy to be a part of this effort, and both the Services and many of our industry partners played a significant role.”

The kids that attended Otronicon had lots of opportunity for hands-on interactions. Photo courtesy of Otronicon and Gelderland Productions.

A typical DVTE suite consists of 32 laptops and a modified NVisor SX head-mounted display. It has two main components, the Combined Arms Network (CAN) and the Infantry Tool Kit (ITK), and utilizes the operator engine Virtual Battlespace in order to create high fidelity graphics for combat realism through simulation.

Team Orlando brought six of the leading games from Serious Games Showcase & Challenge (SGS&C), which was initiated in 2006. Volunteers from NAWCTSD and other Team Orlando offices allowed attendees to see a great representation of the types of serious games that are developed for the Challenge each year.

Steve Slosser, NAWCTSD engineer and SGS&C Otronicon lead, said that Otronicon is a valuable opportunity to support the Orlando community and to also encourage the next generation of serious games developers.

“During the event, I had the chance to visit with the mother of a middle school student, and she told me her son was already developing games,” Slosser said. “She also added that he was enjoying the Post Attack Reconnaissance game so much, she had trouble pulling him away. That’s the kind of enthusiasm we love to see for serious games!” 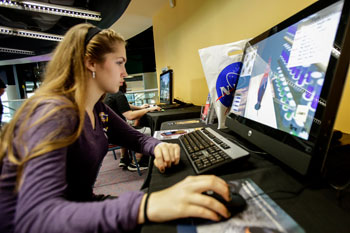 Both kids and adults enjoyed the serious games offered at Otronicon. Photo courtesy of Otronicon and Gelderland Productions.

Otronicon brings together the best in our community for science, technology, engineering and mathematics to make these interactions meaningful and fun for students and their families.