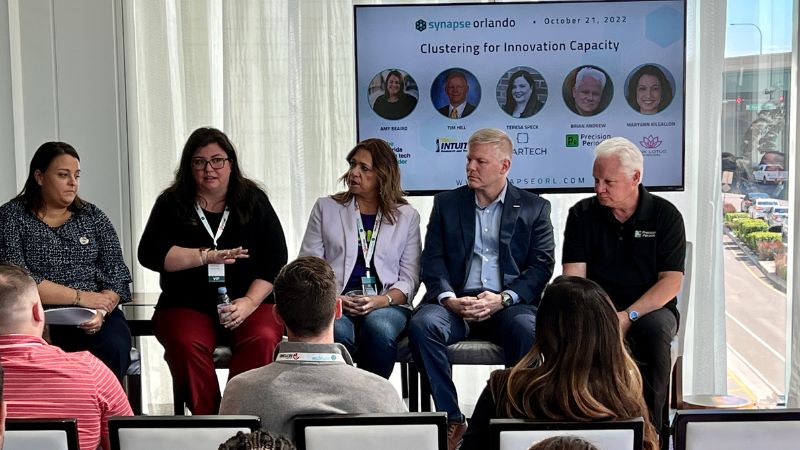 During the Synapse conference held in Orlando, Florida, on Oct. 21, 2022, entrepreneurs, investors and various stakeholders gathered to attend a panel discussion entitled “Clustering to Catalyze Innovation.”

The discussion centered on collaboration and how that has been improved in industry clusters by Cenfluence, a Central Florida initiative currently made up of 103 companies that focus on four high-tech clusters: life sciences; learning sciences and human performance; energy and environmental sciences; and gaming, entertainment, and e-sports.

“We help connect companies for partnerships and with research innovation, initiatives they have underway, grant support, and funding, among other areas where they need support,” said Dr. Amy Beard, Cenfluence’s program director, who also moderated the panel.

The discussion began with introductions and some general benefits of participation in Cenfluence.

“Soar Technology focuses on artificial intelligence (AI) and machine learning, specifically for the warfighter at the Department of Defense (DoD),” Speck said. “The applications and domains where AI and machine learning operate can vary with anything from healthcare to cyber, so it’s important that clusters cross-pollinate to ensure the applications for [our work is] relevant and impactful for the needs of a particular organization. Cenfluence opened the Team Orlando technical aperture to look across non-DoD-specific organizations to really do that commercialization.”

Beard first asked the panel about pivots their companies have had to make in recent years to adapt and remain competitive, or future challenges they saw on the horizon.

Kilgallon noted that supply chain issues got her company to begin thinking about other products. More specifically, how could they expand to get other products and manufacturers into Pink Lotus’ supply chain to avoid problems caused by a lack of options. “Having backups was really important for us,” Kilgallon said.

Hill said that Intuitive Research and Technology is a very collaborative organization, especially when it comes to engineering and problem solving. As a highly collaborative organization, pre-COVID, his organization was accustomed to bringing people around a white board to work problems out, but the new norms from associated with the pandemic have resulted in changes, especially as INTUITIVE has expanded in overall size and number of locations. Hill also mentioned his company’s “deep experience in traditional systems engineering,” but it has been a leader in the movement toward digital engineering, which has involved using modeling and simulation technology to digitize a product design before physically bending metal or writing code.

“Other than work that requires a security clearance, [SoarTech] has pivoted to telework, which has been a huge shift for us,” Speck said. “It helps with retention and hiring more employees in different areas that you would not normally have access to. We actually hired during COVID and grew about 10 percent.”

Next, the conversation discussed collaboration and how involvement in the cluster community has improved innovation for businesses in Central Florida.

“The cluster community has opened our eyes to companies we’d never have access to,” Speck said. “By going to various events and meeting different companies… we realize that we live in a bubble [in the DoD]. Cenfluence has provided technology hot spots and clusters that really empower learning of what’s available and cutting-edge, and our scientists love it. For us, it’s an education of the realm of the possible, where innovation is really coming from, and how to get that into the hands of the warfighter.”

Hill said that being able to identify teammates within individual clusters and across clusters has been especially helpful. He went on to mention market needs that his firm has identified and positioned itself to fill through information he’s learned through association from Cenfluence contacts.

“The other benefit, due to the way we’re structured, is that we can take our in-house engineering talent and provide that as support to others on a discreet basis,” Hill said. “It’s opened up a market for us to go out and talk to companies that might need support from us to help them scale or realize their product.”

Andrew noted that when he began his first start-up in Orlando in 1997, there were very few resources to support new companies, which caused a variety of challenges from office space to research and development. Today, information and opportunities are more readily accessible due to the level of collaboration available through challenges, academic resources and investor involvement. “The availability of people to talk to and ask, ‘Have you had those problems?’ has been amazing,” Andrew said.

Discussion later refocused to cross-cluster and cross-sector collaboration and what companies should look for in developing potential partnerships.

“I look for the willingness to be flexible because the DoD is very different from the commercial side, and they are very rules-centric and data-driven,” Speck said. “It’s wonderful for oversight but it does require a learning curve… the burden of paperwork alone can be overwhelming [for a new firm], and we’re vigilant in letting new partners know that we’re sensitive to that when bringing such relationships together. Now, SoarTech is helping a new partner as a force-multiplier, and that never would’ve happened if they were not participating.”

Kilgallon related an experience from a Tech Grove meeting that resulted in a spontaneous “flowing river of information” of individuals on cell phones in a give-and-take collaboration session that benefited all parties who participated. “That sharing mentality and collaborative spirit is so important in creating success,” Kilgallon said.

Hill echoed Kilgallon’s give-and-take experience with a similar story from his own background at INTUITIVE in working with other companies that have had overlap in their specialty areas. He cited INTUITIVE internal development efforts with potential military application that had not yet fit into a DoD-specific construct. After his company compared notes with another firm, there was potential for that firm to help INTUITIVE take those products to the commercial market. In return, they could help its partner in navigating the complexities of government contracts.

In closing the session, Beard asked the panelists what they thought would best help the Central Florida region and take the cluster community to the next level.

“Having more ownership and building things in Orlando would allow for satellite support technologies to get involved,” Speck said. “Unless you’re the original equipment manufacturer, you’re not really driving the solution. Having more of those builders here in Orlando would be helpful.”

Kilgallon cited the need for accelerators and funding for initial pilot projects. “Start-ups can be very scrappy and do a lot with a little,” she said.

Having a common vision was high on Hill’s list. “What happens on the west side with the parks, what happens in Research Park and downtown and in Lake Nona are really all just different uses of the same technologies, and it doesn’t stop with the tri-county area,” Hill said. “Even if you have your own thing going on in an accelerator or an incubator, if we all have a common vision we can collaborate to reach it. I think that’s the biggest thing we need to get over the hill.”

Andrew spoke about investments in local manufacturing. “If COVID taught us one thing, we can’t rely on overseas factories to supply us with everything – we have to build our stuff here now,” he said. “We need to build new facilities to keep our intellectual property under control and drive the industry because our technology is quite dynamic, and it will evolve very quickly. [For example,] Orlando already has a world-class facility for nanotechnology research and development, and we’d like to build a nano manufacturing facility to actually create it.”