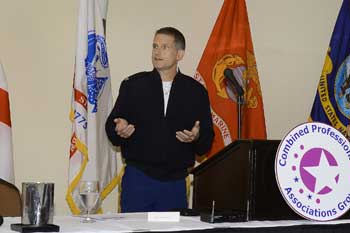 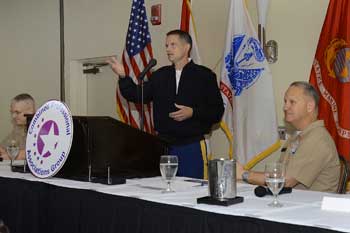 Col. Gordon T. (Tim) Wallace, the new Chief of Staff at PEO STRI, was standing in for Chérie Smith, PEO STRI’s deputy, who was unable to attend this year’s Combined Professionals Association Group Defense Forum Breakfast in January due to a last minute conflict. Wallace talked about the various organizational changes and staff realignments at PEO STRI. He highlighted the establishment of the new joint office for Medical Modeling and Simulation in 2018, led by Lt. Col. Christopher Todd, which will provide expertise in the planning, management and execution of medical simulation programs.

“There have been quite a few budget changes over the year because close to 60 percent of our budget is funded from customers, so it’s not locked in and it makes it challenging,” Wallace said.

Wallace began his Army career in 1990 as a combat engineer, and for the first eleven years of his career he served in combat engineer officer assignments at Fort Bragg, North Carolina; Friedberg, Germany; Fort Leonard Wood, Missouri; and Fort McPherson, Georgia. He participated in Operation Desert Storm, the Hurricane Andrew relief mission, Operation Agile Provider, and the NATO Implementation Force in Bosnia-Herzegovina. Wallace also served as a staff engineer on the Join Task Force Bravo staff in Honduras.

In 2001 he transferred into the Army Acquisition Corps and initially served as a contingency contracting officer in the Third Army Contracting Command. Two years later he entered the program management career field and has held program management positions for 12 years, managing portfolios of C4ISR and computer network operations programs as an assistant product manager while assigned to the Army Special Operations Command.

From there he moved to Program Executive Office Command, Control, Communications-Tactical as a product manager for power generation equipment. In other acquisition assignments he served as the executive officer for the Assistant Secretary of the Army (Acquisition, Logistics and Technology) from 2010-2011, and in 2015 he served as the acquisition advisor to the Director of the Army Capabilities Integration Center.

Wallace has a B.S. Degree in Computer Science, a M.S. in Engineering Management and a Master of Strategic Studies.