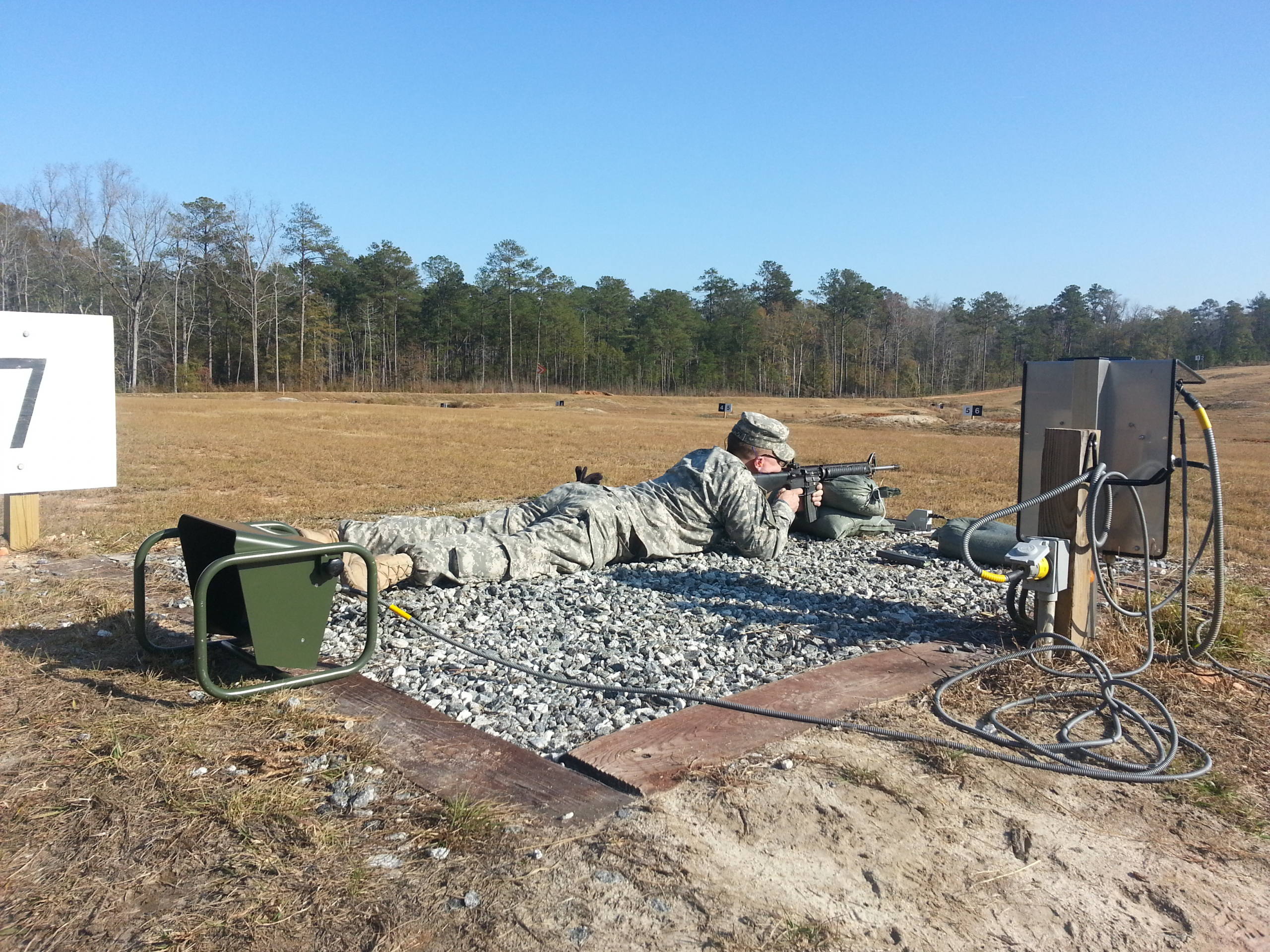 The Location of Miss and Hit (LOMAH) technology has existed for many years, but late last summer/early fall, the Project Manager for Training Devices (PM TRADE) Target Modernization team saw their concept to modularize and streamline LOMAH become a reality when the LOMAH system passed its Government Acceptance Test (GAT). PM TRADE, an organization of the U.S. Army’s Program Executive Office for Simulation, Training and Instrumentation (PEO STRI), is the new system’s Materiel Developer, and since that GAT, they have been busy fielding two additional LOMAH ranges, demonstrating LOMAH’s training potential, and gaining momentum for their modernized LOMAH technology. 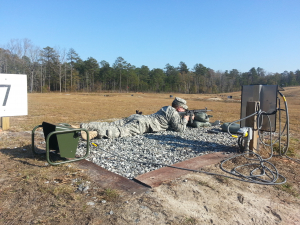 An important part of the new LOMAH technology is its ability to give immediate feedback to the shooter, thus helping to identify what adjustments must be made to “zero” his/her weapon.

The LOMAH technology triangulates the location of rounds fired on or near targets to support Basic Rifle Marksmanship (BRM) training, which increases rifle range efficiency, improves training effectiveness, and saves training time for commanders and Soldiers.

An important part of this technology is its ability to give immediate feedback to the shooter, thus helping to identify what adjustments must be made to “zero” his/her weapon. James Todd, the Project Director/Lead Systems Engineer for Target Modernization, PM TRADE, conceptualized the improvements and is the driving force behind this modularized LOMAH system.

Over the last five years, Todd and his team have been standardizing the small arms ranges to a common set of standards, as part of the Future Army System of Integrated Targets (FASIT), and utilizing a common, Government-owned target control system called Targetry Range Automated Control and Recording (TRACR). When the opportunity presented itself to field a new LOMAH range, the team knew it was the perfect opportunity to extend the TRACR and FASIT capabilities to include a re-envisioned LOMAH capability.

“In the past, the LOMAH range

[technology] has been proprietary, so for each software modification needed, we had to go back to the OEM [original equipment manufacturer] to pay for changes,” said Todd. “We saw the ability to take this and fold it into our Target Modification product line, the TRACR-based line, and now can start porting LOMAH technology to other types of ranges,” Todd further explained.

Currently, there are only a handful of ranges that have this technology. PM TRADE’s initial goal was to make a small investment in the project, migrate it to be a part of their Live Training Transformation (LT2) Product Line, and reduce the life cycle costs by owning the software. Any future changes in requirements would easily be updated by executing them under the existing Post-Deployment Software Support (PDSS) contract that allows for a centralized sustainment of the TRACR system.

To understand the power of LOMAH, one must consider first that the Army has a pass rate of only 40 to 45 percent during qualification, and from test data observations, it appears that a significant contributing factor is that weapons are not zeroed. Zeroing a weapon means making sight adjustments on the weapon that align the round’s point of impact to the Soldier’s point of aim.

To accomplish this on a 300m Known Distance (KD) range without LOMAH, a Soldier shoots at his raised target, which is then lowered, marked, and raised again. He calculates how far off his marked shots are from the target’s center of mass and makes the sight adjustments to his weapon. Then, the target is lowered, ‘patched up’ so the previous shots are not visible, and raised again for the Soldier to re-engage. This process is not only time-consuming, but the effectiveness of the sight adjustments depends on the Soldier’s ability to identify the marked shot locations, calculate his offset from center of mass, and make the correct adjustments for his weapon and sight type.

Utilizing LOMAH, Soldiers make the necessary adjustments based on the immediate feedback displayed on the tablet-based student station at the firing point. While the Soldiers are shooting, the instructors are watching over them and utilizing a tablet-based coaching station that provides a real-time, color-based indication of each shooter’s status. A blue, green, yellow, or red status indicates that a shooter has either successfully met the zeroing standard, the shooter is projected to meet standard, the shooter is struggling to meet standard, or the shooter is far from meeting standard, respectively. The instructor can immediately focus his attention to a shooter not meeting the standard, look at the shooter’s mechanics and LOMAH feedback, and explain to the shooter in real time where he is making mistakes. Based on this information, the Soldier improves his mechanics in addition to correctly zeroing his weapon.

“When the Soldiers go for qualification, they have a practice run and then shoot qualification. It’s the same sequence of events, which require 40 rounds of ammunition for each attempt, and it’s not a good pass rate or good use of ammunition,” said Todd.

“When we went to Fort Benning, they gave us 16 hard luck cases, who wouldn’t have graduated if they did not pass qualification,” said Todd. “When we brought them to the range, they were all downtrodden and wouldn’t even make eye contact.”

Using LOMAH, this group shot to confirm their zero first with 20 rounds, and then went straight to the qualification round. In the first attempt, 11 of the 16 passed, and a 12th would have passed but had a weapon malfunction. Based on the feedback from the LOMAH system, the five that didn’t pass spent time with the range cadre to review some basic skills, and they all passed after a subsequent attempt. “At the end, we had 16 smiling kids on the top of the world,” Todd said.

During the second GAT at Fort Benning, the Target Modernization team asked for more shooters to validate the range and was provided with a unit that had graduated from Basic Training over a year ago, but had not shot qualification since.

“With this group, we ran a zeroing exercise with 20 rounds, a familiarization exercise, and then ran a qualification,” said Michelle K. Garcia Gomez, a Systems Engineer for Target Modernization. “There were 22 shooters and 19 of them passed on their first attempt, however this time, 6 of the 19 scored at the Sharpshooter level, while 7 scored at the highest level of expert, requiring a 36 of 40. Of the final three, two passed on their second attempt.”

The team presented their product and findings to the PEO STRI, Dr. James Blake, as well as to Brigadier General (BG) Michael Lundy, Deputy Commanding General, Combined Arms Center-Training (CAC-T), during a visit he made to PEO STRI earlier this year. BG Lundy saw the potential in the modular LOMAH and inquired about retrofitting existing Forces Command (FORSCOM) ranges to modernize them. In February, Todd and Garcia Gomez joined BG Lundy at Fort Eustis, where BG Lundy, himself, tried out the LOMAH technology.

“His first group of shots was a tight group, but to the left and a little high,” said Todd. “The LOMAH data was interpreted for his shots and the adjustments were made to the weapon. He followed up by hitting dead center on his next two shots, and after firing his third shot, he said, ‘it’s a flyer!’” The LOMAH data confirmed what BG Lundy already knew – his breathing was off and it sent his shot slightly high, although still on target.

At this demonstration, the Target Modernization team set up three different configurations to showcase the LOMAH technology. The first was integrating LOMAH onto legacy targets and infrastructure without digging. This proved that there was a viable, low-cost solution to adding LOMAH capabilities to an old or existing range.

Next, they showed LOMAH on a KD range, where they left the stationary target raised, and demonstrated that one LOMAH bar per target can be utilized to modernize the old KD ranges. LOMAH eliminates the need to raise the target, shoot, mark it up, raise it back and so on, which saves a lot of training time. The feedback is instantaneous and an entire unit can participate at once, as opposed to part of the unit having to raise and lower the targets.

The last demonstration was of a stand-alone LOMAH functionality that exploits the modularity achieved within the new LOMAH construct, and it’s been nicknamed TRACR Assisted Zero (TAZ). “To me, it’s unit-owned, and they can take it to training, or to theater, and confirm zero anywhere,” said Todd. This use of LOMAH in an article that was published in the Army Times about the LOMAH system was what caught the attention of the 10th Mountain Division at Fort Drum, and through some inquiring emails and calls to PM TRADE by the Assistant Division Commander, Operations of the 10th Mountain Division, BG Lundy has worked with PM TRADE to work toward getting the LOMAH system to Fort Drum to allow a Forces Command (FORSCOM) installation the opportunity to use, evaluate, and provide valuable feedback on its use.

The LOMAH technology has reached outside of the Army and has the interest of some of their Team Orlando partners, especially the Marine Corps, who is already collaboratively working with PM TRADE and leveraging some of PM TRADE’s other Live Training products. PM TRADE and PM TRASYS even share a Memorandum of Agreement (MOA) and meet every April and September to discuss potential areas for collaboration and leveraging.

They’ve also discussed it with the Navy, plan to meet with the Air Force, and think that the Federal Law Enforcement Training Center (FLETC) is another potential user.

Savings is a key word these days – especially in this fiscal climate. Through immediate feedback, this new LOMAH technology speeds up the training for quicker qualification and scales back what used to be three days of training on multiple ranges to one day of training on one range. The efficiency of the LOMAH technology gives the Army, and other Services, a better way to train their Warfighters in small arms marksmanship while saving time and money.