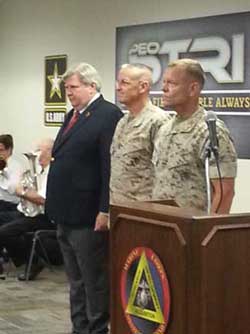 Yates previously served as the Modeling & Simulation Project Officer at PM TRASYS, and returns to the Team Orlando community after serving as the Deputy for Modeling & Simulation for the USMC, from Aug. 2011 – July 2013, and then recently at the Office of the Secretary of Defense as a Corporate Fellow. With Yates’ arrival, Torgler resumed his position of Deputy Program Manager.