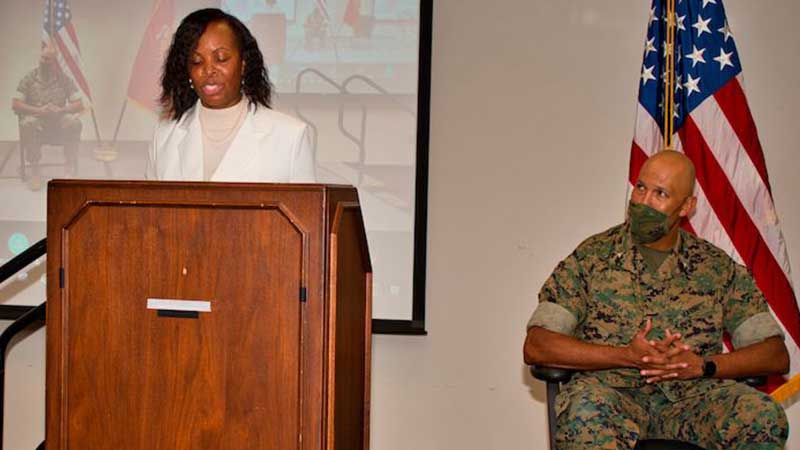 Kim Yarboro, the deputy program manager for Training Systems, culminated her career in a ceremony held March 30, in Orlando, Florida.

In her final role, Yarboro was responsible for the oversight and management of all nonstandard training systems and devices for the Marine Corps, including live, virtual and constructive simulations.

Program Manager of Training Systems Col. Luis Lara officiated the ceremony. He lauded Yarboro for her nearly four decades of distinguished service. “Even though she has never worn the Eagle, Globe and Anchor, Kim has truly personified the core values of Honor, Courage and Commitment and she leaves huge boots to fill,” said Lara. “I could not have asked for a better deputy.”

A native of Columbus, Ohio, Yarboro began her Department of Defense career on Halloween 1983 as a systems supply analyst with the Department of the Army.

“My mother was with me 37-and-a-half years ago when I went to interview for the position,” Yarboro said. “She was concerned that I was being recruited into the military as a service member instead of as a civilian. She was there then, and it’s great that she is able to be here today given the current environment.

Yarboro left the Army to work for the Marine Corps Advanced Amphibious Assault Program in 1997 as an operations research systems analyst and would later serve as the lead systems engineer.

“One key lesson I learned working for the Marine Corps is to make much out of little,” she said. “I always tried to capitalize on the investments of the larger services to support our Marines.”

As a program manager for the Joint Program Executive Office, Mine Resistant Ambush Protected Vehicles, Yarboro managed a fleet of more than 3,000 Cougar MRAP vehicles and oversaw a budget of more than $3.5 billion.

She was a key player in the fielding and testing MRAPs as a survivable vehicle better suited to protect operating forces from the effects of roadside bombs. Her efforts enabled the program office to deliver nearly 18,000 armored vehicles to warfighters in less than 24 months.

“I’ve had the opportunity to work with amazing people on some pretty cool projects,” she said. “But the most rewarding part of my career has been knowing that I’ve helped our Soldiers, Sailors, Airmen and Marines return home to their loved ones. There’s no greater accomplishment.”

Displaying a jovial smile commensurate to her personality, Yarboro reflected on her time with TRASYS.

“I will miss watching people coming through the front doors each morning and doing my daily walkabouts to say hello, the conversations and the view from my office,” she continued. “As a very shy, young girl from very humble beginnings, I thank you for all the kind words and tokens of appreciation. I bid farewell to Team Orlando and my Marine Corps acquisitions families. It has been an absolute blast!”

Yarboro will settle in Charlotte, North Carolina, where she plans to participate in nonprofit work related to COVID-19 recovery as well as assist children preparing for careers in Science, Technology, Engineering and Math.

Reprinted with permission from https://www.marcorsyscom.marines.mil/News/News-Article-Display/Article/2559497/deputy-program-manager-for-trasys-retires-after-37-years-of-service/