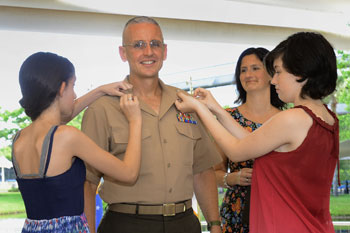 Col. Yates’ wife and his two daughters were in attendance, as well as other friends and colleagues, to help celebrate the special occasion. In his remarks after being promoted, he thanked those in attendance who had mentored and supported him in previous assignments that led to him being selected for promotion and assigned as the Program Manager for Training Systems.

Yates graduated from Texas A&M University in 1990 with a B.S. in mechanical engineering technology, and was commissioned a Second Lieutenant in the USMC. Upon graduation from The Basic School, he was assigned to the Field Artillery military occupational specialty and served ashore, and deployed afloat in billets including platoon commander, fire direction officer, battery commander, and an assignment on recruiting duty.

Yates received his M.S. in modeling, virtual environments and simulation in 2004 from the Naval Postgraduate School, and prior to his current PM position, he served as the Deputy Lead for Modeling and Simulation and Project Manager for the Framework for the Assessment of Cost and Technology.