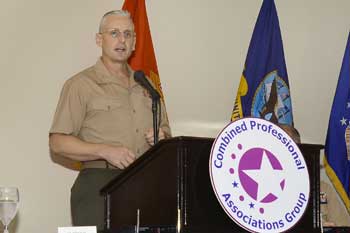 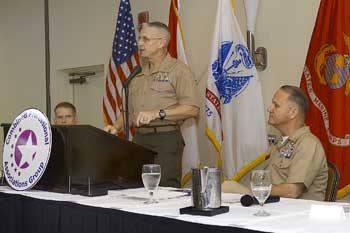 Col. Walt Yates, program manager for Marine Corps System Command, PM TRASYS, one of the four Team Orlando leaders to take part in this year’s Combined Professionals Associations Group (CPAG) Defense Forum Breakfast, focused much of his brief by continuing the conversation Marine Corps leaders were having at Interservice/Industry Training, Simulation and Education Conference (I/ITSEC). These discussions focused on how best the Marine Corps can train and prepare for the future, no matter what the fight will be.

One of those current topics of interest is tactical decision-making simulation for commanders focusing on company and battalion commanders.

Yates repeated an observation made by Gen. Robert B. Neller, Commandant of the U.S. Marine Corps, in his address at I/ITSEC.

“Gen. Neller said a company commander only gets to run Range 400 once,” Yates said. “Repetition of exercise builds skills, so where do commanders get their reps? We need technology that is portable, rugged, easy for Marines to set up and operate themselves.”

Yates added that it’s important to determine the “right mix” of training opportunities. “We need to maximize the readiness obtained per dollar, and determine the optimal transition point from classroom, to simulation, and then to live practice with real equipment,” he said.

With regard to the Marine Corps FY16 budget, Yates noted the programs of record received necessary funding, as well as the Infantry Immersion Trainer for Camp Lejeune. There will also be Combat Convoy Simulator upgrades and refurbishments. 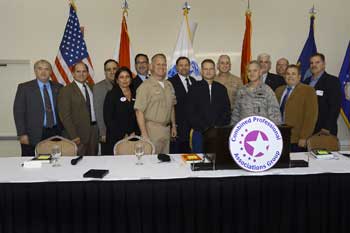 Each year, two organizations that are members of CPAG take the lead in the planning and execution of the Defense Forum Breakfast. This year, the Central Florida Marine Corps Foundation and Women In Defense – Central Florida (WID CFL) took on that role. WID CFL President, Catherine Emerick, said that having Col. Yates, as well as the other Team Orlando leaders, is a welcomed and unique opportunity for industry.

“The Defense Forum Breakfast is a chance for many of us to hear the opportunities and challenges from our Team Orlando leaders in a very quiet and unassuming environment,” Emerick said. “We value their direction and input, and very much benefit in hearing them present in this forum each year.”