PM TRASYS Yates: There are things you just can’t anticipate 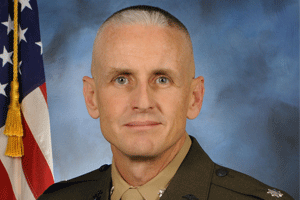 Ever since Col. William Walter “Walt” Yates, Program Manager for Training Systems, was in junior high school, he planned to join the military as a means to pay for college. His father had dropped out of high school after 10th grade to enlist in the Air Force during the Korean War and years later paid for his college education through the GI Bill and personal savings. 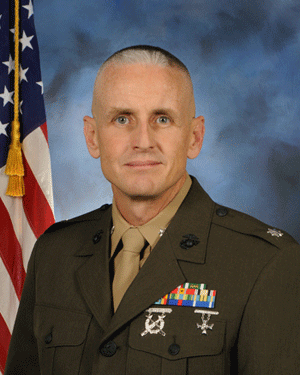 “He told my brother and me from a young age that college was important, but he said we would not truly value it if we did not pay for it ourselves,” Yates said. “So, when I learned about ROTC scholarship opportunities, I decided that was how I would pay for college.”

Yates’ original plan was to seek a commission in the Air Force and follow in his dad’s path, but at the last minute, after arriving at Texas A&M for freshman orientation, he learned that the Air Force had “unresolved concerns” about a heart murmur.

The Marine Corps, on the other hand, had no such concerns and offered Yates a scholarship. “I thoroughly enjoyed my time in the Corps of Cadets at Texas A&M,” he said. “I also enjoyed the Mechanical Engineering Technology curriculum, which gave me exposure to corrosion engineering, welding metallurgy and hydraulic systems, all of which have been very useful on unexpected occasions.”

As the Program Manager for Training Systems (PM TRASYS), Yates is responsible for overseeing the acceptance of requirements for systems and translating those into design specifications that can satisfy the constraints of system performance, cost, and the delivery schedule to the users.

“PM TRASYS has a portfolio that spans hardware, software, facilities, and support services. At the top level, the attributes we use to measure suitability of a system design to meet the requirements are its effectiveness, affordability, and availability,” Yates explained. “The bottom line is that we want to be sure they are reliable and readily available to our users.”

Yates was part of the Team Orlando community and the PM TRASYS staff from 2007 to 2011, and said that both he and his family were happy to return. In the few years since he left, he said the biggest change he has noticed since returning is the transition from the emphasis on rapid, urgent needs for fielding of systems to our current emphasis on sustainment, incremental improvement, and the increasing focus on the federation and interoperability of systems.

“My observation is that the focus has shifted to how we take systems that were originally designed to operate in a standalone fashion, and make them operate as a part of a federation of training systems that provides concurrent training across the ground, air, command, and logistics elements of the force, from the riflemen up through the Commander and his staff, “ he said.

Yates has served in a variety of roles throughout his Marine Corps career, but one of the most rewarding assignments, he notes, was as Inspector-Instructor for Battery D, 2nd Battalion, 14th Marine Regiment in El Paso, Texas, beginning in 1999. “This tour coincided with a trough in defense spending similar in some ways to the budget constraints we face today,” Yates said.

“Because the budgets for training and maintenance were very tight, it forced me to make decisions about where to allocate resources, knowing that some requirements would not be met.”

He said he learned that in some cases the correct approach was to provide an equal level of effort across the board to several mission requirements, and to try achieving a threshold of success for all of them, as opposed to trying to fulfill a mission that required 100% completion in detail at the expense of another mission that was left completely undone.

“Those are actually lessons in management of resources, but where it really offered me a challenge was in leading people, and to accept the responsibility for my choices and communicate the priorities of effort to accomplish the most critical requirements.”

In preparation for his assignment as PM, Yates said his best assignment was a tour as the Liaison Officer from MARCORSYSCOM to Multinational Force West-Iraq in 2008-2009. The job description was essentially to be the in-country product support coordinator for every system fielded to the Marine operating forces in Iraq.

“Being that I wasn’t an expert in any of the systems for which I facilitated support, it gave me a great appreciation for what lifecycle support means—from the moment of fielding a system, through the various events that follow, such as maintenance, repairs, modifications, and engineering changes to a fielded system, redeployment to CONUS, and also final disposition.”

Yates said the experience of troubleshooting unforeseen problems with a system or adapting it to function outside of the parameters of the environment for which it was originally designed was very important for him in understanding the implications of how a system is designed.

Another passion for Yates is cybersecurity, a hot topic around the world, not only for government and the military, but also the private sector, all of whom are working to understand the threats.

As a student in the Senior Acquisition Seminar at Defense Acquisition University (DAU), Yates’ passion was so evident and appreciated, that since graduating, he has been invited back on occasion to return as a speaker.

“I complained eloquently enough that the DAU instructor said, ‘Why don’t you come back and give your point of view?’” Yates said.

Yates said it’s about making risk-based decisions, and even if it’s an unclassified training system that doesn’t contain any truly sensitive data or personal information, the presumption is that it’s vulnerable.

“We always need the ability to recover and reconstitute from a successful attack, rather than deluding ourselves into believing that we can anticipate all threats and continue succeeding everywhere in keeping the enemy outside of the perimeters of our systems and networks,” Yates said. “What we might want to realize is that they are already in our networks, and they’re waiting for the time where they’ll use techniques that nobody knew about beforehand.”

He said when that happens, we need the ability to reconstitute. “We need to take our data we’ve been backing up regularly in a disciplined fashion, reinstall it and our software, and turn on our cold sites or warm sites,” Yates said.

“I think it would be prudent to focus on these things instead of spending all of our resources to try and keep them out,” he said. “There are things you just can’t anticipate.”

When he’s not in his PM role, or keeping up to date with the latest on the cybersecurity front, Yates said he enjoys spending his free time with his wife and their two teenage daughters. However, since returning to Florida last year, home improvement projects have topped his list and have become his most frequent pastime, and passion.

“I spend more time than I would like to admit reading about new tools and technologies,” Yates said. “I like gadgets and websites, and some of my favorites are Kevin Kelly’s Cool Tools, Slashdot, and Ars Technica.”

The end of July will be one year that Yates has been back in Orlando at the PM spot. On June 1, 2015, he was promoted to Colonel.