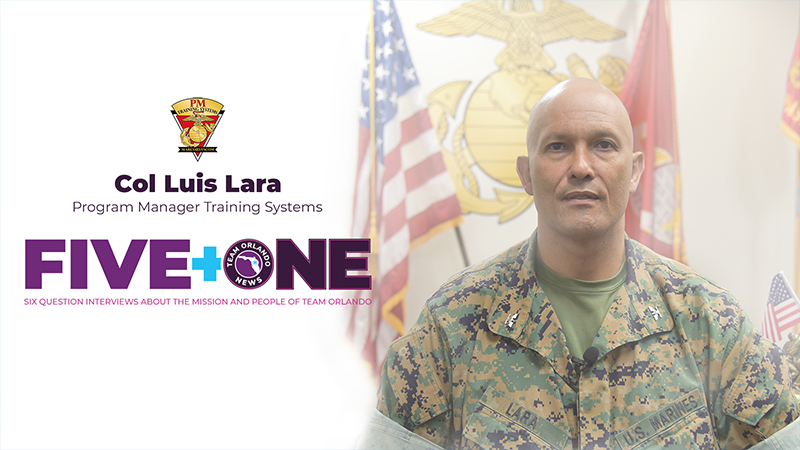 Team Orlando News had the pleasure of sitting down with Col. Luis Lara of the USMC to discuss his tenure as the Program Manager, Training Systems (PM TRASYS) and to gain some insight on what PM TRASYS does and what it takes to run the organization. He celebrated his 30 years of service as a U.S. Marine at a retirement ceremony on April 22.

PM TRASYS has been operating in Orlando since 2001, growing from an initial 20 individuals to 170 today. “TRASYS is the executive agent for Marine Corps Systems Command,” explains Lara, “one of six systems commands in the department of the Navy which strictly focuses on on-the-ground systems and ranges.”

Being the executive agent of on-the-ground systems and ranges is the mission of the organization. “We’re structured into 3 product management teams, which are synthetic training systems that focus on both collective and individual training systems. They do all the construction as well as virtual,” he said. “We have range training systems that support 1400 range training areas across the Marine Corps of which 175 of those are instrumented,” explains Lara. However, because there isn’t depot level maintenance, TRASYS has to award sustainment contracts.

Lara assumed the PM position in 2018 and when he took over, there were a lot of new authorities granted to DoD acquisition and the TRASYS team was prepared to take advantage of those authorities. “Professional growth and development of the workforce was initially my priority,” he said. Secondary and tertiary priorities included growing the workforce and improving acquisition velocity.

Not only would TRASYS be getting a lot of new requirements coming down from their requirements sponsor, Training and Education Command, but the way PM TRASYS handled contracting was being restructured to make contracts broader. This allowed PM TRASYS to utilize multiple task order contracts to get capability out to warfighters as soon as possible.

Looking back on his tenure, Luis feels that PM TRASYS has found success in all three priorities.

“We’re the first program office in the department of the Navy to utilize other transaction authorities to do rapid prototyping, which led to a production contract that was over $100 million,” he said, noting this was a difficult feat which required approval from the Assistant Secretary of the Navy at Research Development and Acquisition. Another significant improvement was that TRASYS kicked off their Live Virtual Construction Training Environment (LVCTE) and are using the software acquisition pathway to achieve that.

Lara didn’t skip a beat when asked about this biggest challenge. “The biggest challenge was working through the pandemic,” he said. Because PM TRASYS has always been a brick-and-mortar organization where people are used to coming in to work, they — like many — weren’t equipped for virtual training and collaboration. “It was a little bit of a slip in schedule,” Lara said.

Not only was the in-person element of work difficult, but supply chain issues and unforeseen cost growth made it difficult for the benefits of sustainment contracts to reach warfighters. “There’s nothing in a playbook that’s going to prepare us for something like that,” he said.

Lara talked about Team Orlando and the Central Florida Tech Grove and how both have played a role in helping him achieve some of his priorities for PM TRASYS.

“I have to tell you, the Team Orlando concept is very collaborative,” Lara explains. “There’s not a joint program office, but we collaborate, we communicate, and we leverage from each other as much as possible.”

PM TRASYS’s synthetic and ranges teams are consistently collaborating with the Army in training.

Not only that, the Tech Grove hosted PM TRASYS as they kicked off the LVCTE and provided the space for a development conference with over 155 participants. 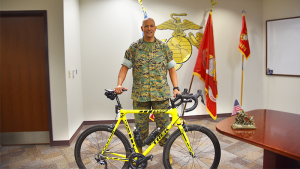 If you’re looking for the colonel outside of PM TRASYS, there’s one place you’re sure to find him and that’s on his bike. “I’m an avid cyclist,” Lara said. “I do a lot of road biking, and I try to cycle three or four times a week. I am part of the Seminole Cyclists Cycling Club and what I like is that their motto is ‘we build strong riders’ and it closely aligns to our Marine Corps culture when it comes to that.” Col. Lara rides up to 150 miles a week and even keeps a secondary bike in his office.

Team Orlando News thanks Col Lara for his time and wishes him the best on his retirement. View the full video interview.