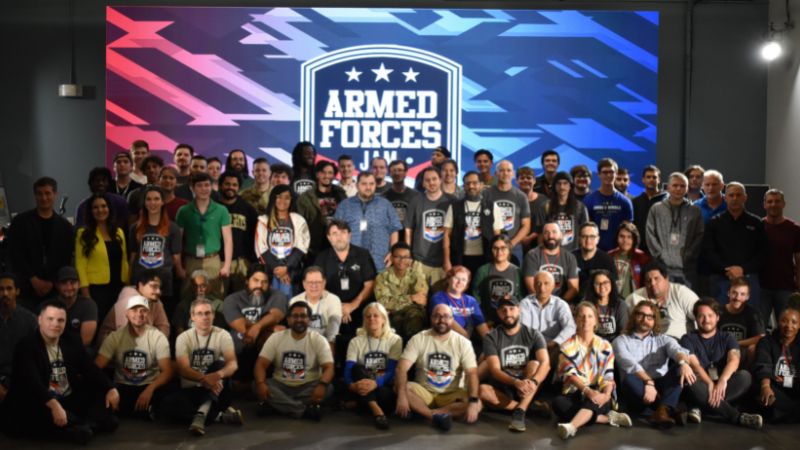 The second annual Armed Forces Jam took place Sept. 9-11, showcasing what the Orlando MetaCenter has to offer.  Indienomicon, who has almost a decade of experience running Game Jams, hosted a weekend long challenge for developers to create a game within a certain theme at the Central Florida Tech Grove.

The Armed Forces Jam focused on several challenge areas for developers to hone in on, including but not limited to the Metaverse, Digital Twins, Electromagnetic Spectrum, Gaming, and Cybersecurity.

The first night of the event gave contestants a chance to pitch their ideas, form teams, and get started on their projects, and by 8:00 the next morning, they were hard at work. Many contestants participating are first time jammers, while others have returned after debuting their games in June at Indienomicon’s MeGa Health Jam.

With ten teams and eleven projects, the judges had a lot to consider in deliberation. Beyond the standard first, second, and third place prizes, there were also awards for the Best Narrative Experience, Best Sound/Music/FX, Best Original Artwork, and Best Social Food Post. There were also bonuses awarded to teams who accepted specific challenges.

Meta Combat Utility (MCU) is a unity based game that makes use of the Oculus headset and the Tesla Suit to help train soldiers for intense combat situations. This group is made of multiple first-time jammers, and they are focusing on training for the first response to terrorist threats. This team took on the added challenge of developing with the Tesla Suit.

Our next group decided to take on the challenge of submitting two games in this competition, Disarmed and MetaGrove. According to the team, Disarm is a real-time strategy (RTS) where players have to man a group of units to respond to mass casualty events such as shootings. According to the team, “we wanted to simulate the use of drones in real-life situations and places to rescue people in danger and neutralize threats.”
As for MetaGrove, it is going to be a VR space built using the Digital Twin of the Tech Grove. The goal of MetaGrove is to showcase the facility’s capabilities in a virtual tour. While this group does have a size advantage, a large number of participants are new jammers. Luckily for team Disarm/MetaGrove, they’ve divvied out their developers based off of their skillsets, and they’re confident in their games.

The Cannon Fodder team hails from Daytona, and is made up of members of the Embry Riddle Game Development Club. Cannon Fodder is a 4-player, 2 v. 2 real-time strategy game where each team of two operates a large field cannon with the goal of defeating their opponents. One player has the ability to see the battlefield with a birds-eye view, and the other has control of the cannon positioning.
This is a teamwork based game, and this is the team’s first game where maps are procedurally generated.

Shell is a game developed based off of the game Blast Corps, except players are only able to play as a tank. Shell is meant purely for entertainment, and did not focus on military application. According to Nicholas, the team is using a new graphic style for this game as opposed to past experiences, and it is intended to be a throwback to fans of the classic game.

Mine Your Step is a multiplayer, competitive, VR game where each player has a countdown and the goal is to find three hidden mines, mark them, and get to the safe zone before their opponent. This team has built virtual replicas of cities in Baghdad and Afghanistan, and are attempting to gamify training.

SpacePort Tycoon is a simulation where the player creates a spaceport. The team designed it so users can plan out what they want on their base and where they want it. The team is attempting to demonstrate why buildings and supplies need to be spaced certain distances away from each other.

Pilot Training Next Next

Pilot Training Next Next is the evolution of Pilot Training Next. The game is built on Unity, and aims to bring the full training experience on low cost simulators that take up little space. This one man team is tasked with not only gamifying the experience, but designing a program that allows multiple systems to communicate with each other.

The Base Crash team is working on a gamified simulator that is based around military base management. The user will be faced with instances like a shooter on base, a riot trying to get on base, and an enemy force taking over. The user will need to use their supplies and budget to assess the situation and remedy the situation. The team is working on advanced shader code to represent the “fog of war”, or how they keep information away from players if there isn’t a realistic way to see into the area.

Our final team was mostly remote, with only two of their six members attending in person. Be a Soldier is a gamified recruitment tool that takes place in a warehouse. Recruits can take an educational tour that teaches them about the different military branches while giving them the opportunity to interact with weaponry and vehicles.

The choice to schedule the Armed Forces Jam on the weekend of September 11th was no coincidence, and recognition went out to all who were serving 21 years ago, as well as all who serve now. Erik Sand, Director of Strategic Partnerships FIEA at the University of Central Florida, thanked all the developers and volunteers for spending their holiday weekend helping the warfighter, stating that “what these teams have done today is movement forward in making sure that the warfighters are safe and that they come back home.”
According to Juan Perez of Indienomicon, “the most important thing is that what happened 21 years ago isn’t going to stop us from moving forward. Events like this integrate a new community to work together to help the armed forces keep fighting, keep engaging, and keep training for better combat situations. This is how we can train to prevent other loss of life events.”
This weekend was a massive success, and that is all thanks to the wonderful volunteers and staff who kept this show on the road. The representatives from Unity, Chef Brian and his team, and the folks at Indienomicon put their all into helping and supporting the participants in every way possible. Industry and tech experts offered up their time and know-how to help participants refine and complete their games. Meanwhile, Chef Brian and his team ensured everyone attending was well fed. This event would not be possible without the support from the Central Florida community.
Congratulations to all of the teams who put their hearts and souls into developing this weekend, and thank you for choosing to spend your time developing to help the warfighter. You all did a fantastic job. All Armed Forces Jam 2022 submissions may be viewed at https://itch.io/jam/armed-forces-jam-2022/entries for you to test out yourself.