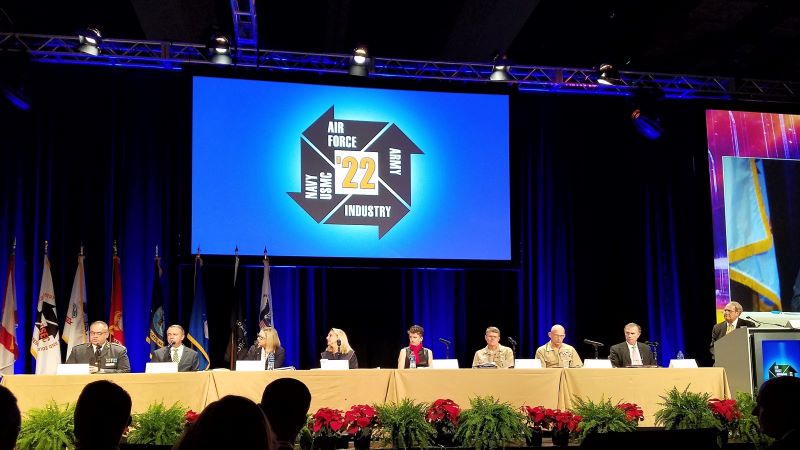 High-level executives met during the second day of the Interservice/Industry Training, Simulation and Education Conference (I/ITSEC) to discuss current and future environments in the context of I/ITSEC 2022’s theme, “It’s Time to ACTTT!!” during a senior leaders panel, in Orlando, Florida, on Nov. 29, 2022.

Reoccurring themes during the conversation included technology (and its increasing pace of development), interoperability (in joint service operations and with international allies/partners), and evolving notions of warfare from a more traditional paradigm.

In his opening remarks, Kusnezov addressed the pace of technology and an uncertain future with unknown threats.

“Technologies are evolving in a way that they are now impacting all economic sectors and age demographics, and are pervasive in ways that we really can’t anticipate, but we see happening every day to everyone we know,” Kusnezov said. “Emerging technology is a component of a changing world that’s hard to pin down, so how do you prepare for things that aren’t experientially rooted? That’s part of the challenge I see in training, and what readiness will be in the future… and we need more foresight into building nonlinear externalities into how we can be ready.”

“There’s no way that process works without failure, or without elongating the development times or discovering problems down range,” Morley said. “We see it inside and outside the Department of Defense (DoD), but what is unique today, is that technology has provided us the tools to help bend this curve, [such as] digital design, model-based systems of engineering, model-based testing evaluation, digital manufacturing, and digital twins. We’re seeing all these are tools in the most innovative companies that are bending that curve of development.”

Baxter began her comments by emphasizing that training American forces to be the most capable and lethal warfighters in the world requires a shared understanding, common vision and collective action, as well as the concern of time pressures due to peer/near-peer adversaries.

“I’ll be blunt: We are running out of time to rethink, to refresh and to transform military training,” Baxter said. “DoD leaders at all levels have recognized this, we’re running full tilt to address it head on, and fiscal year 2023 is really going to be the year of training in DoD. It’s not enough to have the right equipment if we don’t have the people trained on how to use it, when to use it, and why. Those questions – the how, the when, the why – are only getting more complicated.”

Baxter also highlighted the nature of modern warfare, it’s implications for the future, and how the training community should be evolving to pace with tomorrow’s potential threats, since “every fight is an ‘away game’” due to the expeditionary nature of the American military. She went on to emphasize that building truly joint and interoperable training capabilities requires the coordination and support of the entire training community.

“There are no service-specific fights anymore, and there’s no individual service that’s going to ‘own’ the next fight, and neither will any single country,” Baxter said. “Just look at what’s happening in Ukraine with the coalition of countries that are sharing weapons, tools, and training tactics and techniques. Ukrainian soldiers are learning as they train, which is a really striking example of why we, as a training community, need to improve our interoperability, and fast.”

Costa continued the thread of the changing nature of conflict, particularly applied to space, which was once considered an enabler for traditional domains of warfighting, but is now a contested domain. In describing the importance of the Space Force’s mission, Costa noted that it is the smallest force with the largest area of responsibility.

“Have no doubt that [Space Force] guardians are warfighters,” Costa said. “These individuals understand what’s at stake in terms of space being potentially held for ransom by peer competitors, and what that might look like, not only for us as a nation, but for our multinational partners, and citizenry around the world. Space is not just a ‘service’ providing capability, it’s also part of every single service’s defense plan. It’s our job to work jointly with all our service partners to ensure they can execute, force project, and force protect.”

Before the session closed, Robb asked all the panel members what they thought industry could focus on to add value in solving various problem sets. A few responses included:

“If we want to interoperate among our services or with our partners, or if we want to adapt to change, open architectures is where we’ve got to go,” Stamey said. “I see there have been consortiums that are beginning to break down barriers, but we’re not there yet. We’ve been talking about open architectures for a decade now, and I think we’re just now starting to realize it – and there’s certainly opportunity in this space as we interact with our training systems.”

“When you’re developing code, imagine that you as a vendor are not going to be the ones who sustain and maintain it forever,” Costa said. “We want our servicemen and women to be able to touch that code and make changes when needed, and in real time.”

“First, open architectures are the only way we can continue as a community to develop together, and second, looking at data as a product [and] separating it out from the software,” Saunders said. “Data is extremely powerful in all phases of the acquisition process, to include sustainment and maintenance, [and third,] leveraging artificial intelligence (AI) tools can be very powerful, especially when leveraged in an ethical manner. I’m all about implementing AI in our tools within the training systems I develop, but we have to do it in the right way and in an understandable way that we know truly makes our soldiers’ jobs more efficient so they can spend time focusing on making harder decisions.”

“We need to figure out how to change this current generation of digital natives into nascent coders, because when we get into a denied/degraded environment, they’ll be the ones who change the software you write in real time to get past the barriers so we can be successful,” Iiams said. “[Also,] how do we achieve cognitive overmatch? An example [mentioned earlier was] using AI to build better decision-making tools to challenge individuals to be better, not just compared to the aggregate, but to better themselves to their personal best.”