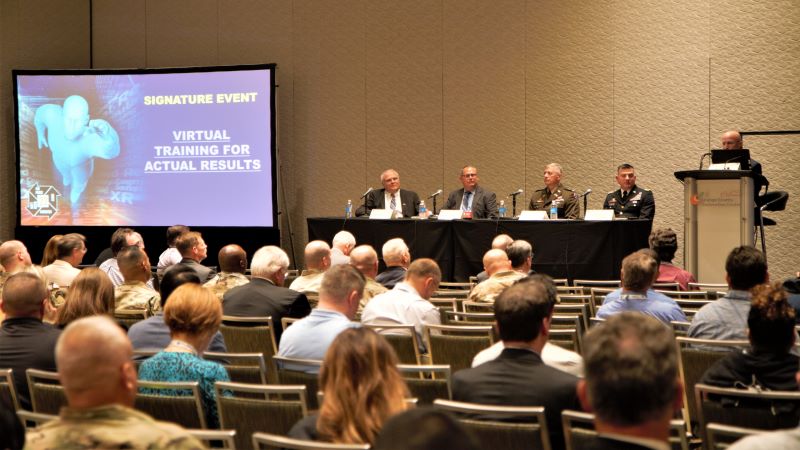 Military and industry leaders representing the virtual training (VT) community participated in the panel, “Virtual Training for Actual Results,” during the second day of the Interservice/Industry Training, Simulation and Education Conference in Orlando, Florida, on Nov. 29, 2022.

The discussion centered on VT’s versatility and impact on Army readiness in simulating different terrain (and tactics and techniques used by allied and opposing forces), evaluation of new equipment and tactics used against enemy forces/systems, and improving testing (such as physical tests).

In his initial comments, Glaser discussed VT’s role in the Army’s efforts to modernize the American soldier through training.

“At the STE CFT, we aim to empower commanders to prepare for war every day,” Glaser said. “We’re primarily focused on training today, but a lot of the tools we’re developing will empower commanders to achieve decision dominance on the battlefield for visualization, wargaming, and rehearsal purposes. There’s a huge potential in front of us.”

Woodward emphasized the practical necessity of simulated training in developing warfighters’ muscle memory due to the costly nature of live training in time and money and the realities of limited resources.

“Simulations are important because anything short of live combat is a simulation,” Woodard said. “Going out to the field to do live training, that’s a simulation because you’re still not going up against a real enemy shooting back at you. As we think of simulations, we have to think across the whole board – live, virtual and constructive – that give soldiers multiple repetitions in tasks they’re going to do, challenges they’re going to face, and dilemmas they’ll have to solve on the battlefield.”

After initial comments, Pulford asked the panel about lessons learned from the Ukrainian conflict as a real-world examples that have highlighted lethality of the environment, shown what multidomain operations look like in reality, and how those lessons were informing future training capability requirements. Glaser noted some historical parallels the Army is experiencing today, compared to the Army of the 1970s: the recent end of a protracted war, the Army updating its air/land battle doctrine, and how Ukraine – like the Yom Kippur War – has shown the U.S. Army how combat has changed, as well as how to move forward.

“As we look at maintaining the dominant land force in the world, the Army is going through a transformation as we modernize,” Glaser said. “We’re pulling lots of lessons learned on exactly what the Army of 2030 needs to look like to be successful. [For example,] in Ukraine we’re seeing the battlefield is very transparent and the art of masking is becoming much more important than it ever was before.”

Glaser listed Secretary of the Army Christine Wormath’s six priorities the Army needs to do to maintain its dominance on the battlefield, which also have relevance to VT:

1) See and sense further than the adversary
2) Have highly lethal and low-signature combat forces that can disperse, converge, and re-disperse quickly as a commander decides necessary
3) Win the “fires fight” using long-range precision fires into an enemy’s rear position
4) Protect the force from air, missile and drone attacks
5) Rapidly and reliably communicate on the battlefield to pass data back and forth between sister services, as well as multinational allies and partners
6) Sustain the fight in a contested environment

Pulford next asked the panel about challenges involved in providing point-of-need capability in the design and development of future training solutions. McNicholas acknowledged that such concerns had presented problems that experts have been trying to solve for “almost a decade” with live training, particularly with fixed-installation programs.

“Training at the point-of-need on the developer’s side means being able to bring that training to warfighters anytime, anywhere, individually, collectively – but in a self-serve, soldier-run kind of way,” McNicholas said. “We can’t afford to have a huge infrastructure, and we have to make these systems work connected, disconnected or [in a manner that allows soldiers] to bring their own devices. We have to provide that flexibility, and that means it’s critical that we move from fixed platforms to a new way of fielding those systems.”

According to McNicholas, this could mean the virtualization of the machines, service-oriented architecture or containerization, among other options, which would allow industry to ride on technology already fielded, instead of fielding new technology that would be obsolete before it could arrive at points-of-need.

“That doesn’t mean we need to operate training systems from the cloud,” McNicholas said. “It’s going to be a while before we field those systems that way, but we need to have that flexibility to let [users] decide. It should be able to run on any environment the Army would like to use.”

Lyders said that the Army simply isn’t postured for the network connectivity it needs for point-of-need or pod-based activities. Usually, this is due to cybersecurity limitations, or a sufficient network just doesn’t exist.

“Posts, camps and stations throughout CONUS and OCONUS run in different regions, [which] have their own policies,” Lyders said. “Industry and government need to work together to propose new policies that allow for the equipment to be moved and connected.”

When the panel discussed lessons learned and observations on VT from units that are forward deployed, Woodward made specific distinctions between the terms “training,” “readiness,” and “training readiness.” According to Woodward, “training” is done at home station, for example, using gunnery tables to get crews qualified on howitzers. Examples of “readiness” include having all soldiers qualified with rifles, current on shots, and complete with their soldier readiness processing.

“Real ‘training readiness’ is when I have all these pieces put together and I’m conducting training at a collective level with the people and the equipment I need,” Woodward said. “It’s not that soldiers have fired their weapons or performed first aid techniques, it’s a matter having done this training together in a collective environment with their leaders present and soldiers receiving feedback for improvement. That’s real ‘training readiness.’”

Woodward also described the rise of social media and its offensive use as an open source of intelligence in the Ukrainian conflict, and the concerns it can present for VT. He noted the ubiquity of social media, which soldiers have access to (even in a combat zone) and its relevance in having effectively targeted and destroyed enemy positions.

“We not only need to understand social media better [as it relates to operational security], but how do you get something like that in a simulation and train for it?” Woodward said. “That’s really difficult because there are a lot of authorities involved in getting into people’s personal information, what we can look at, and what we can replicate.”

Glaser continued Woodward’s thread in voicing his concerns of social media as part of the newly recognized cyber domain of warfare. The U.S. military doesn’t have as much experience fighting in cyber as compared to other traditional domains, so cyber presents new training questions.

“We’re clearly seeing [cyber] play out in Ukraine, and that actually does keep me up at night,” Glaser said. “This new domain will be a significant challenge as we move forward in replicating that training environment for our commanders, which is going to be critically important.”

Near the end of the panel, the metaverse entered the discussion. The “metaverse” is generally considered the internet’s next step in its evolution. In common use, the term often refers to a collection of virtual, 3D worlds focused on social interaction. Debate continues on how the metaverse will evolve, but experts say it holds significant VT potential.

McNicholas said the questions that need resolution have to do with accurately evaluating student performance in metaverse VT applications. More specifically, this involves answering the questions of what students do, and how well they do it, will be crucial in assessing the training effectiveness of metaverse-based scenarios. According to McNicholas, the metaverse delivering capability is one thing, but it’s another thing to efficiently extract what people are doing in that space.

“What I look for in this ‘leap-ahead technology’ is the ability for us to implement systems to cost effectively deliver variability,” McNicholas said.” Soldiers get bored once they figure out the game of a particular scenario, so we need to be able to give them hundreds of scenarios, and at the same time figure how well they did because every life skill you can imagine can be trained in this metaverse. It’s not just determining if [a soldier] went left or right and up the stairs, but how well med students suture a wound, or if they deal with a multiple-casualty situation, if they treat the appropriate person first, second and third.”