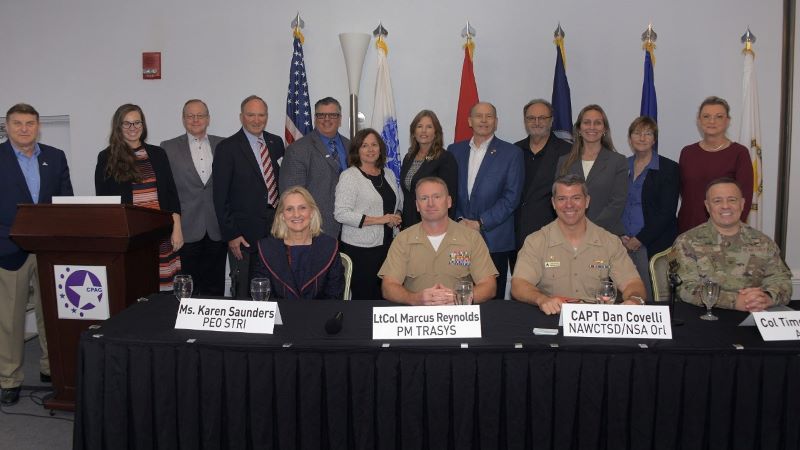 CPAG’s mission is to help coordinate activities and facilitate synergies between various defense organizations and agencies in the MS&T community.

Dan Gallagher, vice president of awards/scholarships for the Army Aviation Association of America’s Central Florida chapter, moderated the panel. The participants updated attendees on their organizations’ recent accomplishments, ongoing projects and future goals. Every leader mentioned interoperability in various contexts, making it a recurring theme at this year’s breakfast.

Karen D. H. Saunders, SES, the senior leader for the Army’s Program Executive Office Simulation, Training and Instrumentation (PEO STRI), outlined significant personnel changes within her organization and partnerships PEO STRI has established and maintained to improve its operations. She went on to speak about how PEO STRI supports the Army’s priorities of people, readiness, and modernization, and mentioned several accomplishments as the major highlights of last year.

“[PEO STRI] supported over 2.5 million Soldiers at different training events… from squad-level to echelons above brigade,” Saunders said. “I don’t have the time this morning to list every single training exercise or event we have supported in the last year, but we are out supporting Soldiers every day as they are training.”

“Most significantly, CT2’s cyber training environment team just fielded an instantiation of the Persistent Cyber Training Environment with Australia,” Saunders said. “We’re truly partners with the Australians in cyber training… that means the Australians will be able to develop capability and content, and then come into the baseline of the program.”

Marine Lt. Col. Marcus Reynolds, Marine Corps Systems Command’s Program Manager for Training Systems (PM TRASYS), discussed the importance of partnerships and recognized the advantages of having so much of the MS&T community consolidated in Central Florida.

“If we try to work alone in silos, that really puts us at a disadvantage against certain threats,” Reynolds said. “We’re tied in with [the Navy], as we have Marines working for the aviation side, which is another portion of acquisitions for the Marine Corps. People forget about that, but we’re partnered for aviation training, and that’s important because as we look into our programs for live, virtual, constructive training, we’ve got to bring all these environments together.”

Reynolds described his organization’s mission, structure and how it supported the commandant of the Marine Corps’ planning guidance on education and training. He discussed making Marine Corps Force Design 2030 a reality, the changes required to achieve those goals and priorities (with a special focus on training modernization), and Project Tripoli’s role in that multidomain effort.

“We’re looking to put all of our training systems into one environment,” Reynolds said. “In the past, all the systems were stand-alone, and it’s more important now that we move to an open architecture so we can connect all these systems under one umbrella as we make strides to bolster our interoperability within the joint operational environment.”

“The National Defense Strategy says that China is our biggest threat,” Covelli said. “During the last I/ITSEC, Congressional caucus members said that China is the biggest threat to democracy, right there, on stage. The question is not if, it’s when, will young men and women have to fight a peer adversary? It’s going to happen – so what are we going to do about it?”

Covelli went on to describe the difference between “raising the bar” and “bending the curve.” “Raising the bar” involves “trying harder” in training. According to Covelli, maintaining an edge, especially over peer/near-peer adversaries, requires “bending the curve,” which transforms the training to exponentially improve outcomes and produce higher-quality warfighters in the same amount of time.

“When I first joined the Navy, we didn’t have a stressing competitor, now we have peers… and if we’re not careful, China will exceed us,” Covelli said. “We need to reduce the time in training, increase through-put in the training pipeline, and reinvest that money wherever it’s needed. [That training] also has to be accessible and interoperable for joint partners among air wings and battle groups, in multiple domains, and with our allies overseas to allow multiple reps and sets.”

“A peer fight [will not be] a bunch of F-35s, or a lone B-52 a la ‘Dr. Strangelove,’” Beers said. “It’s going to be every platform the Air Force and all the services can muster, it’s going to be all the domains, and it’s going to include all coalition partners. That’s what ‘interoperability’ needs to be… and if we expect a multiplatform, multidomain, multiservice, multination fight, we have to train that way with all those platforms in an environment that we can all experience and share.”

Beers said that the first form of interoperability occurred in World War II with the advent of forward air controllers during the European campaign. This early example involved land and air elements communicating to provide commanders with reconnaissance to improve the maneuver of forces. According to Beers, “interoperability” over the next few decades generally meant a commonality of weapons and gear, but it reflected “very Industrial Age thinking” as it only meant that the services “bought the same stuff.”

Beers noted that the 1980s brought about the Data Age, which represented a step forward in a concept of interoperability based on standards of compatibility over simple commonality, and he cited different products in the cell phone market as an example. In relating his experience in the late 1990s of sending different aircraft platforms to neutralize threats he’d located in Iraq, Beers highlighted the value of information as an offensive asset in modern-day combat.

“Now we’re all sharing this information across platforms, data has almost become a weapon unto itself, we’ve moved beyond connecting to sharing, and we’re truly compatible,” Beers said. “In the near future… we’ll need everyone talking together on multidomain, linked networks with artificial intelligence, machine learning, and cognitive electronic warfare. Interoperability needs to be baked into our training systems – we can’t buy stovepipes. We need to be able to connect and share to learn what we need to learn.”

Proceeds from this year’s breakfast benefitted Command K9 Service Dogs, a nonprofit organization that pairs disabled veterans with service dogs free of charge and educates them on how to train the dogs to meet their specific needs.

CPAG’s next Defense Forum breakfast is scheduled for January 2024.

Click on the organizations below to see their presentation slides from this year’s Defense Forum breakfast: