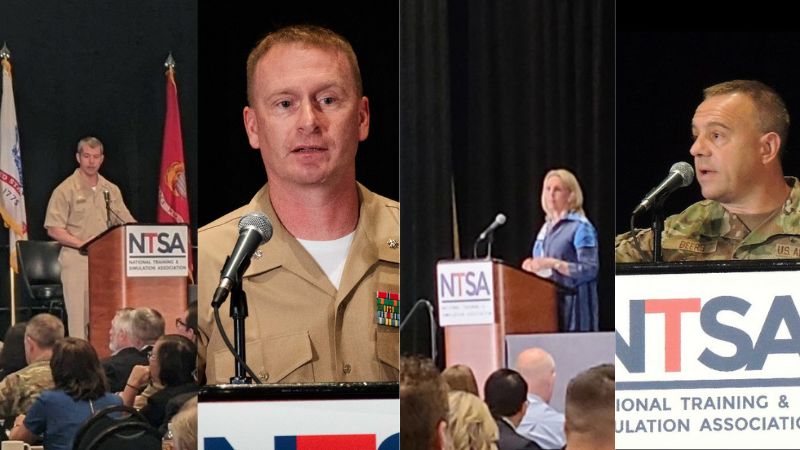 Hosted by the National Training and Simulation Association (NTSA) and opened by its President, Rear Adm. James Robb, the Training and Simulation Industry Symposium (TSIS), June 15-16, offered industry an opportunity to network and interact with modeling, simulation, and training (MS&T) leaders and procurement offices from the Army, Navy, Marine Corps, and Air Force.

Record-breaking attendance of more than 900 people were present for the in-person event, according to Robb. TSIS featured industry exhibits and service-based presentations on near- and long-term acquisition opportunities.

“There must be value here,” said Robb, “I think its because of the networking, and the fact that this whole community is like a family.”

We’re in interesting times, Robb said. “We’ve got a war going on with a potential nuclear event… raging inflation, economic challenges, border issues, and I think its easy to get distracted. But I just want to re-focus everybody for the next two days in direct support of the warfighter – that’s why we’re here.”

The new commander for the U.S. Marine Corps Program Manager Training Systems, Lt. Col. Marcus Reynolds, kicked off the service briefings on the first day and set the tone for the symposium.

“I’m fresh down from Quantico, VA,” Reynolds said. “We’re still living in a hotel, but I didn’t want to miss the opportunity to come out to this event – my first event – and I’m very excited to meet everyone here and look forward to working with everyone in the future.”

Reynolds referenced the U.S. Marine Corps commandant’s planning guidance from 2019 which identified his top five focus areas. “The commandant notably included ‘training and education’ in the top five,” he said.

“Relevant here is that to realize the expansion of training and education, we must develop, mature, and field support of a bundle of capabilities,” said Reynolds.

“The commandant’s focus on training and education recognizes the need to modernize training facilities and practices, said Reynolds. “Which places training on par with manning and equipment.”

During his presentation, Reynolds described both new and changing requirements for the Training Systems office and highlighted the need for rapid procurement.

According to the PM TRASYS presentation, the organization will leverage other transaction authorities (OTAs), other services’ existing contract vehicles, agile software development cycles for new technologies, and the Software Acquisition Pathway (SWP) to achieve faster and better procurement outcomes.

“What’s most important,” said Reynolds, is the “new and nominal approaches of sourcing and solutions required to address the gaps we currently face in the Marine Corps.”

As he delivered his update, Covelli used a graph that represented training and its benefits on performance in the field, and he began by discussing the difference between “raising the bar” and “bending the curve.”

According to Covelli, “raising the bar” amounts to “trying harder” or “practicing more,” such as spending three hours in a simulator instead only one, which provides incremental increases in benefits. “Bending the curve” involves changing the training itself to improve overall outcomes, which results in exponential increases for better-prepared personnel to stay ahead of adversaries.

“Raising the bar only gets us so far, and we can’t keep doing the same thing and expect different results – that’s insanity – we need to flip the script,” Covelli said. “We can’t have incremental gains, we need exponential gains to produce a higher-quality Sailor in the same amount of time, reduce the time in training, and increase our through-put. Distributed mission training needs to be more accessible so that [different Navy groups] can train together and train with allies and coalition partners overseas like we’d really fight. That’s what we really need to do, and it needs to be more frequent.”

Covelli also underscored the need for consistency in drills to maintain readiness and proficiency against peer and near-peer adversaries.

“One bench press in the gym per year is not going to cut it,” Covelli said. “[Sailors] need to get ‘reps and sets’ to be proficient. Otherwise, the best training in the world isn’t going to us any good.”

NAWCTSD also contributes to training in aspects of naval warfare outside of aviation, such as surface warfare. Covelli cited his organization’s strengths that make those contributions relevant.

“We’re not the experts in surface warfare,” Covelli said. “We’re the experts in modeling, simulation, training, and human performance, and we’re good at collaborating. By collaborating with industry, we’re going to provide the best training to the warfighter.”

Covelli went on to stress the importance of communicating with allies and interoperability in maintaining strategic advantage on the global stage.

“Strong allies help protect our interests overseas, and sometimes our allies are ready to fund an upgrade before we are,” Covelli said. “That’s free R&D [research and development], and free R&D helps bend the point on the curve sooner.”

Near the end of his talk, Covelli emphasized that tending to four focus areas helped maintain a better-trained force over peer and near-peer adversaries: the customer, speed, availability and affordability of the training products employed.

Karen Saunders, SES, Program Management Office Simulation, Training, and Instrumentation (PEO STRI), touched on some of the priorities of PEO STRI, which have changed with the appointment of Secretary of the Army, Christine Wormuth last March and include “modernization, readiness, and reform” to “people, readiness, and modernization”. Additionally, Wormuth laid out six objectives that PEO STRI is working to achieve.

According to Saunders, reform will always be a priority of the Army, but “Secretary Wormuth really wants to put people first, with readiness and modernization to anchor these priorities”. As for Wormuth’s six objectives, Saunders emphasized two of those. One is focused on building “a sustainable strategic force during these challenging and uncertain times,” and the other is to ensure the Army can “find a cutting edge and data centric way to operate multi-domain operations in content, contested, and congested environments”.  See all six of the Secretary’s priorities from her Feb. 8, 2022 message at https://www.army.mil/article/253814/message_from_the_secretary_of_the_army_to_the_force.

PEO STRI plays a critical role in these main two objectives as they build and sustain this “strategic path” for soldiers, the training products provided, and the data gathered and used, to improve the training of these soldiers.

“These enterprise initiatives are going to set the stage for us, drive the future, and help the PMs as they bring capability into the force,” said Saunders.

While Saunders’ leadership team focuses on having a workforce that is agile in thought and in deed, they have also initiated the STRI Agile Acquisition Response (STAAR) – a five-year, middle-tier acquisition rapid prototype authority.

In the final TSIS service briefing, Col. Timothy Beers discussed key elements for industry in working with the Air Force Agency for Modeling and Simulation (AFAMS).

“What I’d like to tell you about today is training and readiness,” said Beers. “Chapter one of that is what AFAMS refers to as the paradox of training.”

“For years, we’ve enjoyed a superiority of technology over our adversaries, but our superiority is waning,” Beers said. “And probably by the end of this decade, we will not go into a fight with superior technology. That’s really scary. For the last 25 years I’ve been in the service, I knew in my heart of hearts, I was better trained and better equipped. I don’t know if our next generation will be able to say that.”

“When you hear from AFAMS, we’re giving you the total sum of our warfighters needs,” said Beers.

Beers noted that the Air Force is moving away from the Common Synthetic Training Environment to the Joint Simulation Environment (JSE) and “will turn that into what we need for pilot advanced training environments.”

This change, Beers believes, promotes the advancement of the interoperability of simulation systems, software upgrades, and cybersecurity pushes.

The change also lends itself to AFAMS future simulation needs. “I need to be able to include all of the domains: airspace, cyber, maritime, and I need models that are operationally relevant and realistic,” Beers said.

“Training is the product of systems and a single environment in which the participants interact,” he said. “I can have the best environment in the world, but if I can’t share it, it has no value.”

Beers also stressed the importance of realism, efficiency, and effectiveness in simulations.

One of the other challenges the Air Force is facing is the length of time it takes for new scenarios and intelligence to make it to the training environment.

“I need to shorten the time it takes from intel collection to what’s in the simulator. Right now, it takes 18 months to introduce new metrics to the warfighter. That is much too long. I need that in the order of days or weeks,” Beers said.

AFAMS is also promoting data-centricity rather than network centricity. “I need the data to almost form the infrastructure itself. I need to no longer be beholden to a specific network but be able to move that data across networks. It’s that data that matters the most,” said Beers.

TSIS presentations for each of the service leaders, as well as their acquisition and program management personnel, can be found at https://www.ntsa.org/events/2022/6/15/tsis-2022/presentations.