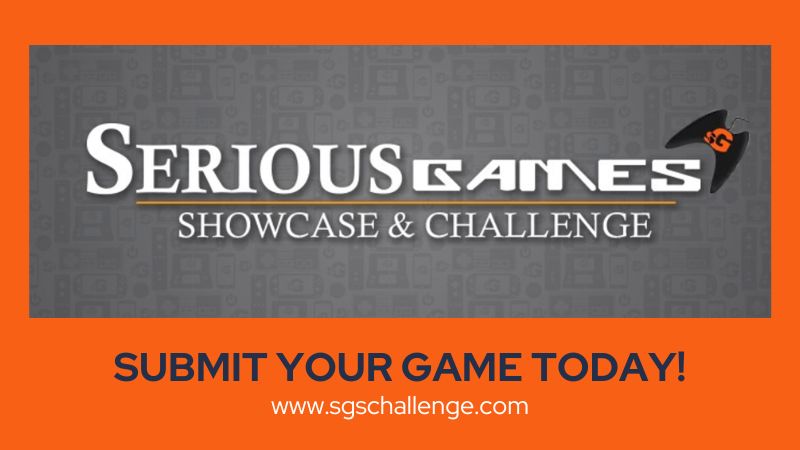 The Serious Games Showcase & Challenge announced that submissions are now open for the 2022 Challenge. Finalists from the Challenge showcase their games at the Interservice/Industry Training, Simulation and Education Conference (I/ITSEC), the world’s largest modeling, simulation and training event, Nov. 28-Dec 2 in Orlando, Florida. Attendees from all over the world take part in I/ITSEC, which includes a commercial exhibit hall, professional workshops, special events and so much more. The period for submitting a game closes September 2.

The finalist pool is selected in October, and those chosen exhibit their games at I/ITSEC. The SGS&C winners for each category are announced at I/ITSEC on Thursday, Dec. 1 at the SGS&C Awards Ceremony.

“After thoughtful discussion amongst our committee and with the input of some of our former finalists and winners, we updated the awards structure,” said Jenn McNamara, Breakaway Games, and director for the SGS&C. “It is now based on the target audience for the game submission for government and business, not submission category.”

“Like the category name, the general audience award includes games that are built specifically for a general audience, such as corporate training, general education, general health/healthcare and wellness, public interest, etc.,” said McNamara. “The funders and developers of these game can be private or government entities.”
McNamara continued, “Government audience games are created specifically for national or local government or defense purposes, such as military tactics, equipment, or procedures, law enforcement, cybersecurity, tactical combat care and triage, veterans’ health and affairs, public works, and space.”

While those two categories quickly establish the intended audience and how well they meet the learning goals, games may also quality for the Innovation Award and People’s Choice Award.

“The Innovation and the People’s Choice Awards are chosen by a panel of judges unique to those awards,” said Amanda Bond, SoarTech, SGS&C committee industry chair. “The Innovation Award is judged by the IPT committee and awarded at the discretion of the committee,” she explained. “It recognizes games that exhibit a unique characteristic or technique that enhances the serious game in a new or different way.”

The People’s Choice Award involves the I/ITSEC attendees, who vote using ballots given to them at registration. “Each attendee is encouraged to visit the SGS&C booth, play the games and vote,” Bond said. “They can drop off their ballot at our booth until the end of the exhibit day on Wednesday, and then our committee collects the ballot box and tallies them later to determine the winner.”
Additionally, games that are geared toward the middle and high school students, and their curricula and standards, quality for the Students’ Choice Award. These games are evaluated by selected school systems from around the United States, and the students who play the games, rate them, and determine the winner.

Other presented awards, which are judged by the SGS&C panel of international evaluators include:

SGS&C grew out of a Team Orlando initiative spearheaded by NAWCTSD and sponsored by NTSA. SGS&C’s first I/ITSEC was 2006 and it has been a thriving part of the I/ITSEC experience since then.

Questions about the competition, becoming an evaluator or serving on the committee can be sent to SGSChallenge@gmail.com.