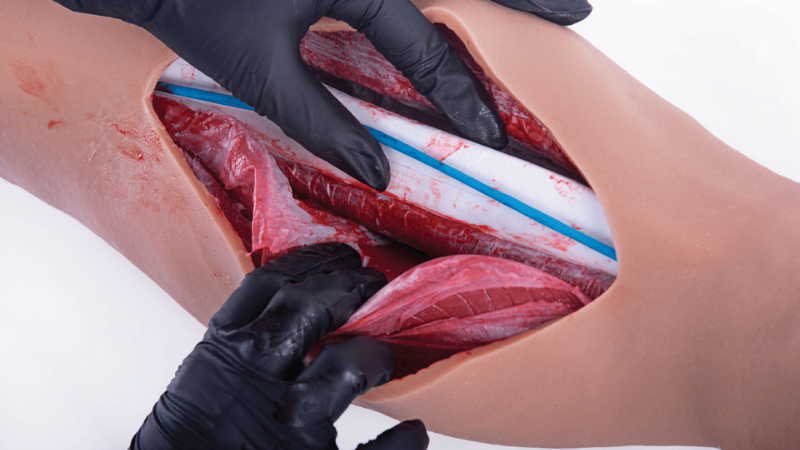 “Over the past several years, SIMETRI developed stand-alone training systems that we have leveraged to enable SOF teams to train for prolonged care,” said Angela Alban, SIMETRI CEO. “Our team designed and developed the mechanical, electrical, and software interfaces between the modules and the manikin to provide the only manikin in the market capable of supporting prolonged care training,” said Angela Alban, SIMETRI CEO.

SIMETRI’s Smart Modules include fasciotomy, escharotomy, HHIO, central line, amputations, abdominal evisceration, and moulage. The modules are mechanically and digitally integrated with the patient manikin. In addition, the manikin tracks and physiologically responds positively or negatively depending on the trainee’s performance of critical lifesaving procedures.

SIMETRI also worked with Sonalysts to integrate their Lateral canthotomy and canthylosis (LCC) part task trainer as a Smart Module. LCC is a simple procedure used to decompress a compartment syndrome of the eye orbit, most often used in cases of blunt trauma.

“SIMETRI’s products are intentionally designed to be modular, reusable, cost-effective, and easy to use and maintain,” said Alban. “Our approach allows our team to quickly adapt to new training gaps.”

The initial prototype was delivered in September 2021 and will be evaluated for a year to help inform SOCOM on what future SPEARPOINTS training facilities will require for SOF medical training.