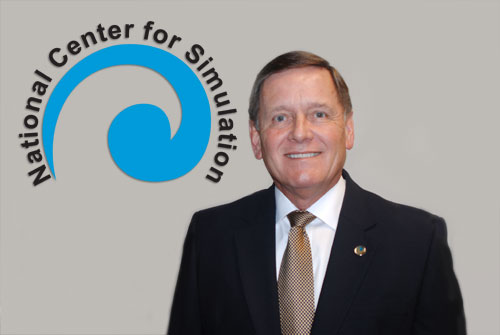 When Lt Gen (Ret) Tom Baptiste decided to retire in Orlando in 2007, it was so he and his wife, Judy, could be close to their two grown daughters and four grandchildren. He had been assigned to MacDill Air Force Base (AFB) in Tampa three different times, and there was an attraction to Florida that was already established.

But when they moved to Orlando, he didn’t know anyone else in the area except his daughter, so he spent time reaching out to professional groups, joining them, and attending their meetings and luncheons. Soon, Baptiste began consulting for three local companies and when the opportunity presented itself, he applied, and was hired as the President and Executive Director for the National Center for Simulation (NCS).

And these days, with the uneasiness of the fiscal environment heavy on the minds of those in Central Florida, what is considered the epicenter for modeling and simulation, Baptiste is spending his days traveling and meeting with those who are influencers in an effort to share NCS’ message.

“What we do here in Orlando is provide cost-effective solutions to train the force,” said Baptiste, “those simulation and training technologies and devices that provide world class training to our Warfighters. They represent a cost-effective alternative to very high-priced live training.”

Baptiste’s experience with simulation before NCS was only that of a fighter pilot user. A graduate of California State University at Chico, Baptiste knew by his third year of college he wanted to fly, and applied for the U.S. Air Force Officer Training School (OTS) after receiving his degree. In 1973, there was an excess of pilots following the Vietnam War, and although Baptiste was accepted to OTS, there were no airplanes to fly and few pilot slots, except those reserved for Air Force Academy graduates and the cream of the crop ROTC graduates from across the country.

“That was my first setback,” said Baptiste. “I was accepted to OTS but I would have to go in as a navigator and not as a pilot. My brother was an F-4 fighter pilot and he discouraged me from taking this path, but I had a plan,” he said.

Luckily his plan worked. The F-4 Phantom was a two seat fighter with a seat for a navigator weapon systems officer (WSO) in the back. Baptiste went through navigator training, did well and chose to pursue an assignment as an F-4 WSO in preparation for another application to pilot training. After serving two years of F-4 operational duty, Baptiste reapplied to be considered for about 100 pilot slots Air Force wide.

But yet again, fate was challenging Baptiste. He had to retake the flight physical as part of his second pilot training application, and didn’t pass the eye test because of a slight refractive error. In order to complete his application, he had to apply for a waiver of the sight requirements to the Air Force Surgeon General. He collected his recommendation letters from senior leaders and sent those along with his waiver request.

“At this point I was convinced, there’s no way this is ever going to happen,” said Baptiste. “But my waiver was approved, and because I had done very well in my two years as a WSO, I was selected to go to undergraduate pilot training (UPT).”

So Baptiste was off to Hondo, Texas to the T-41 Flight Screening program, to the final step before jet training at UPT. When he set off for Texas, he had underestimated the time the trip would take from California to San Antonio and ended up having to drive almost two days without rest. No problem, though, he pulled into Lackland Air Force Base in the early morning the day he was to report. And upon reporting, Baptiste was informed that he needed to take, yet another, flight physical.

“During the physical, one of the tests was for near vision. The technician tested my right eye and all was well, but when he tested my left, he said I failed the test,” said Baptiste. “I explained I had been driving all night and that I wanted him to retest my left eye after I took a nap and rested my eyes, and he agreed.

“As soon as he left the room, I picked up the ruler with the small chart and memorized the lines of letters,” Baptiste chuckled.

During the retest when Baptiste rattled off the appropriate line of letters, the technician asked him right away if he had memorized the chart, and Baptiste said, “You’re damn right I did! You have no idea what I’ve been through to get here.” This setback was avoided, and with a passion that would follow him throughout his career, Baptiste would complete the training and go on to pilot training, and graduate at the top in his class.

When considering a follow-on aircraft toward the end of UPT, Baptiste considered the ‘hot’ F15 Eagle, but in 1978, the F-15 was experiencing significant engine problems and the training wing at Luke Air Force Base was more than 1,000 sorties behind. So, when the choices finally dropped for his UPT class, there were no F-15 assignments to choose and so it was back to the F-4.

“It wasn’t quite time for the F-16 so I went back in the front seat of the F-4,” said Baptiste. “I went to California for six months of training at the replacement training unit and then reported to Seymour Johnson AFB in North Carolina for my operational tour in the F-4.”

After only two years into his assignment there, there was an opportunity for leaders to choose one person from the wing to become part of the initial cadre of Instructor Pilots in the F-16 training wing being stood up back at MacDill AFB. Each squadron commander at Seymour picked one pilot to nominate for the assignment and from those four the wing commander selected who would go.

“I went through the beauty contest and was lucky enough to be selected to transition out of the F-4 and into the F-16, essentially to get in on the ground floor of the F-16 program,” said Baptiste. “That’s how I ended up back at MacDill a second time.”

An experienced F-4 pilot, Baptiste went through a short transition course from the F-4 to the F-16; quickly completed an instructor course, and then was given a brand new second lieutenant from the Air Force Academy to train. “The F-16 was a leap into the digital age,” Baptiste said. “It was like getting out of an Oldsmobile ’88 and stepping into a Ferrari.”

From there Baptiste was on a fast tack. After two years as an F-16 instructor pilot and flight commander in the 62nd Tactical Fighter Training Squadron at MacDill, he was promoted to Major, and began his swift movement up the ranks.

In June 2004, Baptiste was promoted to Lieutenant General and assigned as the Deputy Chairman of the NATO Military Committee, the highest military authority in NATO. The Military Committee was responsible for direction and advice on military policy and strategy to the North Atlantic Council, guidance to the NATO Strategic Commanders and support to the development of strategic concepts for the Alliance.

One of the biggest claims during his time as part of the NATO Military Committee, he noted, was helping to field the NATO response force. “It was the first time NATO had a rapid reaction force trained and equipped to support contingency operations out of area,” said Baptiste.

“The second was helping to secure a decision to get NATO to deploy 20,000 soldiers to Afghanistan,” he added. “A significant emotional event for the Alliance, it was the first time NATO had ever committed to an operational mission out of area, and it relieved a lot of the pressure on America and the coalition.”

Today, Baptiste’s passion and focus is on the challenges ahead for the Modeling and Simulation Industry and how the effects of Department of Defense budget cuts will play out. “We are at a critical time,” said Baptiste. “As we look at the current budget environment, NCS is working to promote what simulation can do to meet some of the readiness challenges in what will be a continuing austere budget environment, and this is a window of opportunity for our industry to continue to thrive.”

“We have the best-trained military in the world and part of that is the power of simulation,” said Baptiste. “Simulation provides a cost-effective alternative to very costly live training.”

Recently, Baptiste, along with Congressman John Mica, other industry partners and state and local representatives have made important visits to Washington, D.C., to tell the story and raise the visibility of Team Orlando and simulation, and what the commands deliver to America and its Warfighters.

“Team Orlando is a strategic national resource that has grown and matured over the past 47+ years,” said Baptiste. “Collocation of the acquisition organizations in the Research Park provides an environment for unprecedented collaboration, and partnership between Industry, Academia and Government, one the DoD should look to as a model for effective Civilian-Military cooperation.”