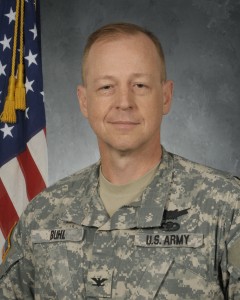 Buhl was raised in rural Pennsylvania, an area of the country that he described as a humble part of the country, and one where the choices 30 years ago for a young man’s future were primarily that of either joining the military, entering seminary, or factory work.

“With fair grades I applied for an ROTC scholarship and was lucky enough to be selected,” Buhl said. “I attended college in Philadelphia and was commissioned as an Armor Officer in 1988. If I hadn’t gotten a scholarship, I probably would have enlisted.”

As a young boy growing up in Pennsylvania in the Poconos Mountains, Buhl spent much of his time climbing, biking, hiking and collecting scrap lumber to construct forts. “I was very much an outdoor kid,” Buhl said. “There were no video games and we might have gotten three television channels if the weather was right,” he joked.

While in college, Buhl majored in physics. “I tend to be a big picture type of person and physics, from what I saw, provided me the best opportunity because I really wasn’t sure what I wanted to do when I grew up,” Buhl said. “Physics gave me a baseline to pursue a career in either science, engineering or medicine, and a bachelor’s degree that would enable me to do just about anything else in a graduate field.”

Buhl’s first assignment was as a Cavalry Scout Platoon leader in the First Squadron, First Cavalry, Katterbach, West Germany with duty on the former Intra-German and Czechoslovakian borders.

He also served in Southwest Asia during Operations Desert Shield and Storm. “We deployed to Saudi Arabia to liberate Kuwait from the Iraqi invasion in 1991,” Buhl said. “That event almost immediately was a precursor to the Berlin Wall coming down and Yeltsin coming to power, providing autonomy to Russia’s socialist republics that were part of the Soviet Union,” Buhl explained. “That very formative era really was a drastic change for the Army and, as a military officer, it offered a good set of lessons and perspective.”

Buhl paralleled these events to the 9/11 tragedy. “I don’t want to compare and try to say they were even remotely alike, but they were transformative events in our history,” Buhl said. “When I map those events against the different assignments that I’ve had through the years, I’ve had the opportunity to see what we were before the transformative event, and maybe what our conditions were to enable change, and then to see how we reacted or what opportunities presented themselves after the fact.”

Buhl served his Lieutenant Colonel Command assignment as the Commander of the Ronald Reagan Ballistic Missile Defense Test Site at Kwajalein Atoll (RTS) from July 2007 to July 2009. He then served as the Assistant to the Director of the Missile Defense Agency at the U.S. Strategic Command (US STRATCOM), located on Offutt Air Force Base, NE.

Just prior to joining PEO STRI, Buhl was at the Industrial College of the Armed Forces (ICAF) completing his graduate thesis, Acquiring Joint Force Effectiveness in a Diminishing Resource Environment.

Buhl said he’d like to think that everybody he has worked with throughout his many assignments has made a tremendous impact on him. “I learn from everyone I meet,” Buhl explained. “Ninety-nine percent of the time, these interactions prove to be useful life lessons.”

“I’ve had the fortunate opportunity to say that each assignment I’ve had has been a good assignment, although some have been more challenging and difficult than others,” Buhl said.

Talking about his new PM CATT position, Buhl described PEO STRI’s technology and the capabilities that customers would want. “We are an Army organization, but we do work for Combat Commands, and other Services and Agencies within the government. We provide those capabilities as a benefit to the taxpayer,” Buhl said.

Buhl described that PEO STRI is organizationally aligned in three simulation domains: live, virtual and constructive, with targets and threats across each domain. He is responsible for the virtual training capabilities that PEO STRI provides to the Army.

“In the virtual domain, PM CATT has a wide portfolio because most of the time when you want to train in an emergency situation, without putting somebody at risk or equipment at risk, you want to do it in a virtual or a gaming environment,” Buhl explained. “Virtual Environments can be very immersive and really make the stress level go up, the heart palpitate, and the trainee break a sweat.”

“Across the virtual portfolio there are many great technologies and capabilities, but the key is first immersing Soldiers in a virtual world so they experience it in a controlled environment before they see it for the first time in combat or in a stressful live situation,” Buhl said.

Buhl’s assignments have kept him busy throughout the years, but every moment that isn’t devoted to his job, he tries to spend with his wife and two children. “We enjoy doing things as a family,” Buhl said. “Previously we lived in Virginia, Nebraska, Kentucky, among other places. Being out in the middle of nowhere provides a lot of opportunities to see many things in America, hiking and spending time together as a family.” While on Kwajalein Island, nearly smack in the middle of the expansive Pacific Ocean, they became “expert” bicycle riders because there are no cars. “We biked as a family quite a bit for fun, but also for exercise.”

[in Orlando] my wife and children are very much beach people, and so I am a beach person by default,” he smiled. “They love the fact they can just drive over to the beach and spend a couple hours or most of a day before being home that night.”

While Buhl’s family enjoys all that Central Florida offers them, he is focused on how PM CATT is going to provide virtual capabilities to meet the needs of the Army, today and in the future.

The Army recently published a new Army training strategy, and PEO STRI leaders subsequently participated in a strategic planning to discuss the future of PEO STRI, their support of the Army, the Combatant Commands and the Department of Defense (DoD).

Armed with those data points, Buhl’s team met to posture the intellectual capabilities, the costs and the programs that PM CATT currently has, and where they need to go to support the Army’s training in the next 15 to 30 years.

“It’s very important for us to do this because the budget cycles and the requirement cycles are two things that are not within our direct control as materiel developers, but do directly impact our operation,” Buhl said. “We need to make sure we look at narrow enough capability paths that still provide flexibility within which we can reach a wide set of opportunities.”

“As one looks at the decreasing budgets and the need to put money in those places that are going to provide the best opportunity and flexibility for the return on investment, we need to ensure that we’re investing in the infrastructure we have here – our people,” Buhl said. “The intellectual capital that we have here is tremendous; the government has invested a lot in these folks who possess a tremendous amount of experience, information, and knowledge. We need to make sure that whatever we do, we provide only the opportunity to expand to build a stronger foundation as we look at the uncertainty that is out there ahead of us.”

Moving forward Buhl said it’s important for the government and industry to leverage each other’s capabilities. “We need to partner as much as we can within ethical and legal boundaries so that our industry counterparts can understand what’s going on, and they can posture themselves for success in a business sense that’s parallel with where we’re going,” said Buhl.

Buhl said the government-industry relationship thrives in a competitively cooperative environment so that all parties are pulling together for the interests of the nation, and competing for the best solutions.

“At the end of the day, I know all the businesses that I’ve dealt with are focused on the same goal as us, and that’s our Soldiers,” Buhl said. “Like us, they want to make sure our Soldiers see something for the first time in a training environment, and not when somebody is shooting at them.”

“It’s all about these Soldiers, our national treasure, those men and women that we put in harm’s way,” Buhl said.