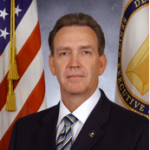 Rob Reyenga serves as the Deputy Program Executive Officer for the Program Executive Office for Simulation, Training and Instrumentation (PEO STRI), and was appointed to his position in November 2007 after serving as PEO STRI’s Business Operations Executive. Prior to his civil service appointment, he served 26 years on active duty with the United States Army, completing his tour of duty on May 31, 2004, and retired as a Colonel.

Reyenga grew up in Shreveport, LA, and spent much of his youth working on the family farm and enjoying the outdoors. “At that time, there were some organized sports, but it wasn’t at the level of youth athletics that we have today,” Reyenga said. “So I participated in some sporting activities, just like the rest of my friends did, but I really enjoyed going camping, hunting and fishing. I also participated in Boy Scouts.”

In the area of the country where Reyenga lived, military service was prevalent, and although not an “Army brat,” he came from a military family. His father served in World War II, his brother served in the Navy and fought in Vietnam, and all of his uncles were servicemen. One of his uncles was wounded in the Battle of the Bulge during WWII, and his dad’s cousin was a POW in Germany. Going back to his great grandfather who emigrated from Holland to the United States in 1888, there have been 12 male children, and 11 of them have served in some type of military service.

In May 1978, Reyenga graduated from the University of Louisiana (Monroe) and was designated a Distinguished Military Graduate in the Reserve Officer Training Program and commissioned as a Field Artillery Officer in the Regular Army. One of his early assignments included a tour of duty with the 193rd Infantry Brigade in the Republic of Panama from 1978-1981, where he served as Fire Support Officer, Fire Direction Officer and Battery Executive Officer.

As part of his unit’s duties in Panama as a separate artillery battery, they supported the military installations on both ends of the Panama Canal, protecting the most vulnerable areas of the waterway. “We would split the battery in half, half to the Atlantic side and half to the Pacific side, then put cannons on the boat and sail through the canal,” he said. “It was a pretty neat assignment as a young lieutenant.”

“When President Carter returned the canal to Panama and the Canal Zone disappeared, it was once again Panamanian territory and their national flag was raised on the military installations,” he reflected. “That was also something special to see.”

Reyenga said the U.S. Army was a different army back then. After the Vietnam War as service leaders were determining how they were going to prepare the future force, a training revolution for the Army began and the role of PEO STRI’s origins began to take shape. As the Army had an increased demand for training, they needed to look at how to provide the training devices, and that would change the way units trained at the homestation. The decision was made to move a small organization out of Fort Benning, GA, to the Navy Training Base in Orlando, and the Navy and the Army signed an agreement more than 60 years ago to participate together in providing training devices to the services.

“The Army is there again,” Reyenga said, talking about the current state of the Army. “Our forces are dropping down to an end strength of around 490,000 Soldiers. This relatively small force is expected to be ready anytime and to go anywhere, which means we will have a much more capable force, down to each individual Soldier. There are several pieces to achieving that, but one major part is through training.”

When Reyenga served as the Colonel in charge of the Project Management Office for Training Devices, from 2001-2004, he said that much of the impetus, driven by the then-STRICOM commander, BG Stephen Seay, was creating interoperability between the live, constructive and virtual training devices. “The issue was, though, that we had requirement documents that said all the things that this device needed to do, but in most cases, it didn’t say it had to work with other training devices,” Reyenga said.

“But when you have commanders who are imaginative, resourceful and dedicated to training their Soldiers, they want to create challenging and complex training events in order to best prepare their troops,” Reyenga said.

“Now, what’s truly innovative and resourceful is that more and more of our enablers are able to work together, so trainers are able to create complex training events that challenge the commanders, the staffs and the Soldiers.”

“We are not at a 100 percent solution yet, but I think we have a much better vision and plan than we had 10 years ago,” Reyenga said, referencing the Army’s state-of-the-art Integrated Training Environment concept.

When he’s not focused on his magnitude of responsibility at PEO STRI, Reyenga likes to take time to enjoy the outdoors, an appreciation that developed in his youth. “I’ve plowed up about a third of my backyard for gardening,” Reyenga said, who mostly grows vegetables. “I find it very therapeutic.”

Reyenga says he also “hacks around at golf” and really enjoys going to the shooting range. “I usually go with two of my sons, but recently my youngest daughter has become interested and has gone with me,” he said. “She’s been out there three or four times now, she posts her pictures online, and she keeps her target, so I think she enjoys it.”

“The way they get their teams ready is through training,” he said. “What PEO STRI does very well is provide all the necessary pieces for a high-fidelity training experience to prepare them for their mission.”