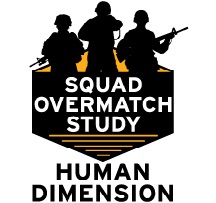 The Department of the Army recently announced that the Squad Overmatch Study, submitted by PEO STRI, is the winner of the 2014 Army Modeling and Simulation Team Award for Training. PM TRADE’s Rob Wolf led a team comprised of government, industry and academia, which were recognized for their outstanding achievements as it relates to the study, its findings, and recommendations.

The study focused on the prevention of post traumatic stress and improving mental performance at the squad level through the employment of gaming, virtual and live training technologies, combined with learning techniques to manage psychological stress in combat scenarios.

”Today’s Soldiers encounter many stressors in a complex, unpredictable and fluid operational environment,” said COL Vince Malone, Project Manager Training Devices (PM TRADE). “The outstanding work that the Squad Overmatch Study Team has done to take on the immense challenge of developing resilience skills for our Soldiers to better train them for the strains of warfare is commendable.

This study, along with other similar initiatives, begins addressing the Human Dimension aspects of combat that need to be incorporated into training doctrine. Human Dimension funding requirements will be submitted for consideration in the FY17-FY21 POM.

These same Army team members from PEO STRI and ARL HRED received PEO STRI’s Team of the Quarter at the end of October for their work on this study. Dr. Joan Johnston, one of the members of the ARL team on the project, said she was really impressed with how quickly working with PEO STRI, contractors, and other agencies, they were able to come together to make it happen.

“This partnership is a great example of how research and acquisition organizations, academia and industry can rapidly and effectively work together to support the Warfighter,” Johnston said. “And a great story demonstrating the value of Team Orlando.”