Startup Creates Next Generation 3D Models for Healthcare & Beyond

Home » Startup Creates Next Generation 3D Models for Healthcare & Beyond 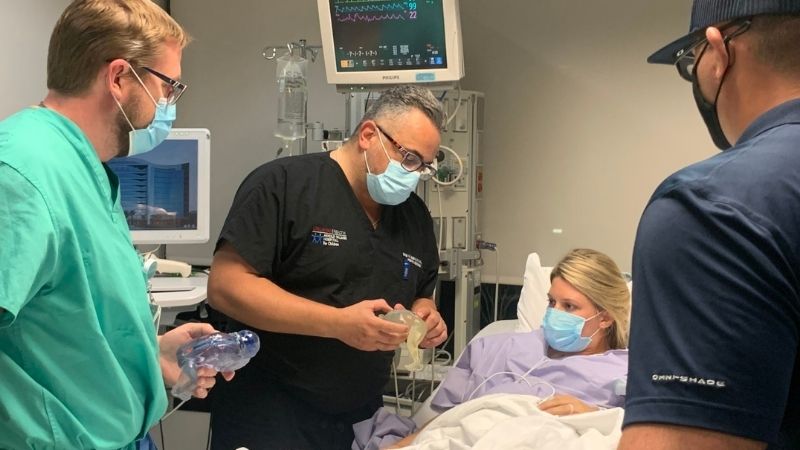 By Amanda Roche, Director, Marketing and Communications. This content was originally published by the Orlando Economic Partnership.

Imagine you are a soon-to-be parent, looking at one of the most complete images of your future family member for the first time on an ultrasound scan. But instead of the nervous butterflies of a new parent, you are feeling panic inducing anxiety – the doctor has detected a rare birth defect called spina bifida. If left untreated, it will cause long term physical and neurological issues for your child.

Depending on the type, maturity and many other factors, corrective surgery could entail a variety of different techniques. And while magnetic resonance imaging (MRI) technology has come a long way, it is still difficult to discern the exact portions of the swelling around the spine on your unborn baby. But now imagine that the surgeon hands you a 3-dimensional model, demonstrating in real-life terms the severity of the defect and the plan for corrective surgery.

Correcting the spinal defect in utero has resulted in significantly fewer health concerns and better functionality than those who receive surgery after they’re born. But fetal surgery is a relatively novel, advanced procedure; Orlando Health’s Winnie Palmer Hospital for Women & Babies is one of only 12 facilities in the country that offers fetal surgery for spina bifida, and the first and only in Florida. Not only does a 3D model give the surgeon a better, more tactile replica of the tiny patient to plan the right surgical approach, it also serves as an educational tool for new parents who may be concerned about the novelty of the procedure.

That type of 3D model is what Jack Stubbs, CEO of D.A.S.H. Orlando and his team of digital artists, mechanical engineers, and computer science experts create using 3D printing technology. Located just south of downtown Orlando and down the street from Orlando Health’s main healthcare cluster, Stubbs and his team work closely with the hospital system to produce timely, anatomically accurate models.

So far, D.A.S.H. (which stands for digital anatomy simulations for healthcare) has created six fetal models for spina bifida using one of the most advanced Stratasys 3D printers. DA.S.H. has a special partnership with Stratasys to work on the latest advancements in medical technology, beta-testing printers and materials. And 3D printed, real-life model for fetal spina bifida is just one of these healthcare applications.

(Stubbs jokes that Schmidt and others at Orlando Health can “dash” down the street to the lab.) “The lab will help us to evolve how we teach certain medical procedures to medical residents to be more effective,” said Schmidt.

Schmidt gives the example of a central line insertion training procedure that includes very specific insertions into the body. “The mannequin model used for that training was already full of holes in exactly the right places, so the trainee wasn’t being adequately tested on their knowledge.” To solve this problem, the D.A.S.H. team is working on printing “self-healing,” 3D printed skin to reduce the conspicuousness of the previous trainees’ work and make more effective training tools. This skin sit atop 3D printed anatomical modules that can easily be swapped out for new for modules after a training session. And this self-healing skin is just a small part of the 3D printed module approach to medical training – the lab is working on innovations that apply to the entire module in order to improve the training process.

The D.A.S.H team is still moving into its new office and lab space in Downtown Orlando but plans to be fully up-and-running in the next few months. Prior to its new space, the lab was located at UCF and known as the “PD3D” lab. Stubbs started the lab after moving to Orlando from Minnesota where he led research on technology for simulating and teaching healthcare procedures at the University of Minnesota (U of M) Medical School. But when Stubbs tried to patent and commercialize some of the innovations developed from his work at U of M, he ran into challenges coming to an agreement with the university. Stubbs was able to find the right partnership relationship at UCF’s School of Modeling Simulation and Training.

“I was surprised at first to discover how much research and innovation for modeling, simulation and training existed at UCF and here in Orlando,” said Jack Stubbs, CEO of D.A.S.H. Orlando. “But the college has been great to work with and the UCF Office of Research & Commercialization has supported our spin-off every step of the way.”

In fact, in 2020, eight percent of the total patents from UCF came from Stubbs’ PD3D lab, with seven patents issued and six-seven more currently pending. This patented IP is fueling D.A.S.H.’s growth in the market.

In addition to its close relationship with Orlando Health, D.A.S.H. has on-going projects with Lakeland Regional Hospital, the University of South Florida’s radiology department and trauma centers around the region. As a side project, D.A.S.H. also created a 3D model of the new Orlando Health Jewett Orthopedic Institute, a 195,000-square-foot inpatient facility set to open in 2023.

The lean startup lab has big projects on the horizon but has not lost its roots in finding the best and brightest from UCF. In addition to its founding team, D.A.S.H. hires numerous interns from UCF and draws from the established cluster of simulation and training established at Central Florida Research Park. In fact, one of its current interns has prior experience working at the Naval Air Warfare Center Training Systems Division located in the research park.

The future of healthcare, including self-healing skin for body doubles and 3D fetal models, can be seen more clearly from the lab at D.A.S.H. Orlando.