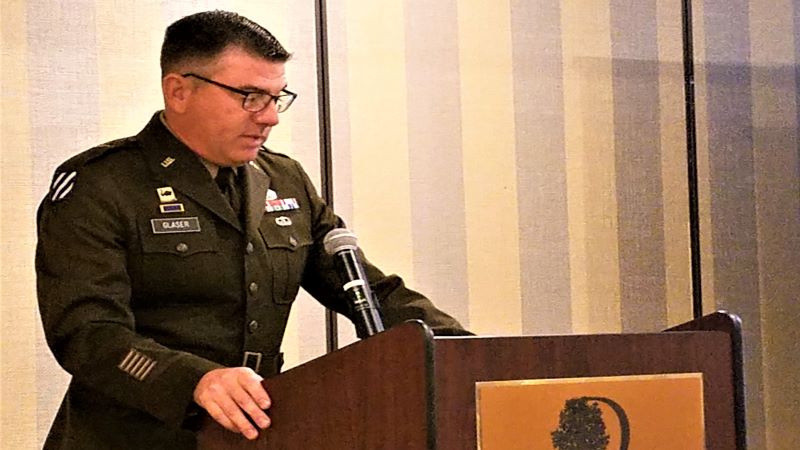 Glaser gave his audience an overview of STE CFT, and addressed challenges and opportunities facing his organization, as well as the U.S. Army as a whole.

Beginning with a special request to the Army veterans in the audience, Glaser asked them to share their Army stories with the community and young people considering military service.

“The Army is facing some of the most challenging recruiting environments since the formation of the all-volunteer force,” Glaser said. “It’s a question of, ‘Do we lower our standards to meet our end-strengths, or do we lower our end-strengths to maintain the quality of this professional force that we enjoy?’ The Army… will maintain quality over quantity every day, and we are doing everything in our ability to make that happen.”

He went on to cite the Army’s top priorities (people, readiness and modernization) and specifically discussed STE’s part in modernization.

“We’re modernizing the American soldier through training and providing the Synthetic Training Environment so they can arrive on the battlefield with a higher level of training readiness than they’ve ever had before,” Glaser said.

As he described various programs focused on modernizing soldiers, Glaser noted the benefits and challenges involved with those programs, to include Synthetic Training Environment – Information System, One World Terrain, Training Simulation Software, Training Management Tool, and the Reconfigurable Virtual Collective Trainer, among others.

Glaser also brought attention to other training programs and devices that will replace those currently used in modernization efforts, such as the Soldier Virtual Trainer that will take over for the Engagement Skills Trainer 2000, which has helped soldiers maintain and improve marksmanship skills for several years. Other replacements will improve call-for-fire training for joint fire observers, as well as use-of-force training for military police.

“We’re focused on the training, but I think a lot of our capabilities will help the operational force in realms other than training, specifically in visualization, wargaming and rehearsals… to support operations overseas,” Glaser said. “We’re leveraging large data sets to make planning timelines much shorter to coordinate exercises and [give our soldiers] multiple sets and reps so they have a higher level of readiness as they go into a live environment. We’re not here to replace the live training environment, we’re here to complement it.”