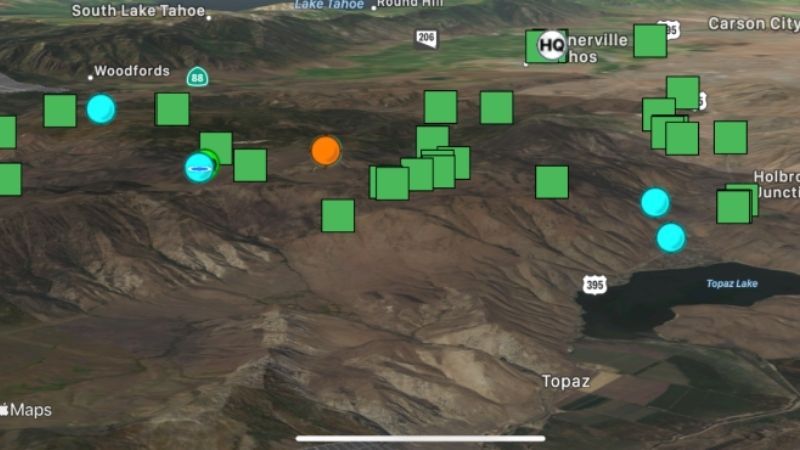 The operational use of the Science and Technology Directorate’s (S&T) Team Awareness Kit (TAK) technology continues to grow, as a new iOS version is now available as a free download on Apple’s App Store. TAK is a geospatial mapping platform and common operating program that uses a mobile device’s GPS to track a user’s location, while displaying the locations of other users for enhanced situational awareness—making it easier for teams and first responders from different organizations to collaborate in the field. The app has potential for use in a wide variety of response situations; for example, by teams on different sides of a mountain or in various locations at an emergency scene that need to coordinate operations quickly and efficiently. TAK has been used in firefighting, law enforcement, hurricane relief, national security special events such as the UN General Assembly, major sporting events like the Super Bowl, large music festivals, and daily public safety operations.

Before TAK, incident commanders needed to contact multiple teams separately and plot them on a map. With TAK, teams can keep moving, command can see everyone in the field and redirect them promptly, and response times are shorter. While the Android version of TAK (ATAK) is the most mature version of the application, a growing number of organizations that could benefit from TAK primarily use iOS devices. Over the past two years, S&T has developed and tested a version for Apple users—iTAK—and obtained end-user feedback from DHS components, interagency partners, and first responders, including firefighters in the western U.S. iTAK deployment is critical for the wildfire community, as according to S&T’s colleagues at the U.S. Forest Service, nearly 80% of the devices carried by wildland firefighters are iOS-based.

Originally developed by DoD for military special operations, TAK has emerged as a solution not only for firefighters, but also for first responders across disciplines. The development of an iOS version offers the potential to keep many more first responders safe on the job and save more lives.

“S&T is very excited to extend the TAK capability to the iOS platform, which will reach significantly more users across our operational components, as well as our interagency partners and first responder communities,” said Program Manager Shawn McDonald.

“iTAK will be a game changer. The broader first responder community is eagerly awaiting its deployment,” added S&T FEMA Portfolio Manager Denis Gusty, who led an interagency collaboration to provide the initial virtual TAK training for firefighters in California during the 2020 fire season.

TAK allows a user to carry a single device to access maps and real-time data to coordinate with other users. For firefighters, the situational awareness TAK offers means they can view fire lines and safety zones, track their adjoining forces, integrate multiple data feeds (such as supporting aircraft locations), and view any imagery or data being streamed from these resources. Command can review video footage from aircraft and see the locations of team members and vehicles on the ground. They can see all interagency resources and receive real-time updates on fire growth and hot spots based on data collected by aircraft.

Most recently, S&T has been working with the Colorado Center of Excellence for Advanced Technology Aerial Firefighting (CoE). Throughout 2021, an interagency team deployed to numerous wildfires and piloted TAK and other technologies to support fulfilling the requirements of the John D. Dingell Act, which was signed into law in 2019. The CoE also supported the U.S. Forest Service by deploying TAK on the Tamarack Fire in Northern California and Nevada, the Caldor Fire in Northern California, and several other incidents around the Western U.S. In December 2021, Colorado’s state surveillance aircraft, integrated with TAK, was able to track the Marshall Fire between Denver and Boulder and push fire perimeter data to firefighters on the ground. The information-sharing and situational awareness TAK provided in real time were invaluable in the early hours of the incident and after dark.

“The ability to push a real-time map of the fire out to the field through TAK was pivotal in improving the decision-making of fire managers on the Tamarack Fire, who were able to adopt a more aggressive strategy to fight the fire and keep it 16,000 acres smaller than it would otherwise have been,” explained Brad Schmidt, CoE Wildland Fire Projects Manager.  In search and rescue operations in the backcountry, TAK has proven to be a powerful tool to shorten response times and save lives. To this end, Colorado is now piloting TAK for an all-hazards system with several agencies. Since the start of this program, there have been at least 10 rescues that involved TAK. In backcountry rescues, TAK could mean the difference between a quick rescue and a night spent out in the wilderness.

iTAK is designed to be intuitive and fully interoperable with other TAK products such as ATAK, WinTAK and WebTAK. Download iTAK from the App Store. Going forward, additional feedback from firefighters, search and rescue teams, and other first responders will inform future development.