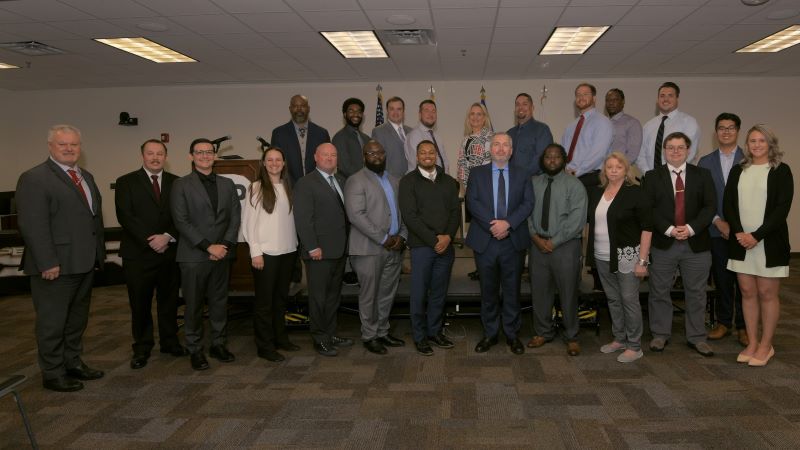 A group of 19 students graduated from the Program Executive Office Simulation, Training and Instrumentation (PEO STRI) Acquisition Academy Apprentice Program (A3P) during an April 1 ceremony, marking the end of an 11-week training period.

The A3P curriculum incorporated more than 400 hours of classroom instruction in both virtual and in-person training environments and three trips to military installations. The class, known as Cohort 1, also marked the official return of the A3P to PEO STRI after being dormant for several years.

Experience levels in the cohort ranged from seasoned PEO STRI professionals to new hires within the federal government. In addition to the local Florida area, students also came from six additional states across the country.

“Because the Army has decided to invest heavily in professional development and talent management across a diverse spectrum of people, PEO STRI has decided to do its part by having this program,” said Program Executive Officer Karen D. H. Saunders, SES. “This program is recognized from the very top at the Office of the Secretary of Defense.”

As the graduation ceremony’s keynote speaker, Saunders said she sees a lot of value in the program, and the relaunch of the A3P was a high-level priority for her since assuming the duties as PEO in 2020.

“It is our people who provide us with an enduring advantage to remain the world’s most ready, lethal and capable land combat force,” Saunders told the graduating class. “You are part of that force now, you may not wear the uniform, but you are part of the force that helps our Soldiers be ready.”

“I think it’s going to give them a head start on their new careers as Department of the Army civilians,” Delaporte said. “The group have worked hard over the past 11 weeks, participating in over 400 hours of instruction and received briefs and classes in contracting, finance, engineering, logistics, problem solving and more.”

The training culminated in a small group capstone exercise and presentation that pit these minds against current real-world friction points for PEO STRI such as cybersecurity, materiel release and adaptive acquisition.

“The apprentices have done a wide variety of different things, and we’ve kept them busy,” Delaporte said. “More importantly, we have helped them build a cohort, so as they go through their time at STRI with their rotational assignments they are going to be able to call upon each other. It’s important to have that bond.”

Graduates of the program said it served as a way to become familiar with federal government employment, as well as afforded them the opportunity to see how civilian employees help to support Army warfighters.

“I expected it to be a lot of work, which it has been, but it’s definitely been really good,” said Orlando resident Sarah Rassel who has a degree in electrical engineering and worked in private industry prior to joining the A3P. “I started working about a month prior to the beginning of the class, and a bunch of my teammates on the One World Terrain training team told me that I was going to learn so much and get a complete overview of what we do at PEO STRI.”

Rassel said the program exceeded her expectations and she now feels more confident going into her job with the knowledge gained through A3P. Her favorite parts of the program were the visits to military bases and installations.

“During the trips I was able to bond with the group and get to know everyone, which was a little difficult with the Teams-based instruction,” Rassel said. “It was really good to see a base, as I had never been on an Army base before.”

A3P cohort student Makail Davis, a recent graduate of Florida Polytechnic University, said the program serves as a way to fast track someone into federal employment and knowing how to operate at PEO STRI.

“I don’t have an Army background, and I don’t understand ranks,” Davis said. “But having that brief on how military ranks work and other background information helps us to get adjusted to the Army lifestyle.”

Davis said he also learned about the overall PEO STRI portfolio and how every Soldier in the U.S. Army has trained on a PEO STRI system.
Graduates will now start their three-year rotational internship programs, serving on the staffs of project managers and project leads across the PEO STRI enterprise.