Students from across the state of Florida had the unique opportunity to take part in “Simulation: Evolutionary Past, Boundless Future,” coordinated by the National Center for Simulation (NCS) and Lou Frey Institute of Politics and Government at the University of Central Florida. 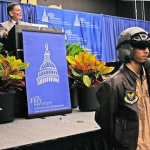 The event, held in late September at the UCF Student Union, showcased and highlighted some careers in the science, technology, engineering and mathematics (STEM) area of concentration, with the goal of exciting students about the diversity of the industries using Modeling and Simulation and the endless list of career paths they could pursue with a STEM-focused education.

Students spent the afternoon session rotating through various industries for the opportunity to participate in hands-on simulation experiences within the fields of DoD, healthcare, education and training, modeling and engineering analysis and entertainment.

The hands-on activities were numerous and included practicing medical procedures through simulation, using software to create training scenarios across aviation, maritime and ground domains, as well as interactions with UCF’s TeachLive, a mixed-reality classroom with simulated students. Additionally, attendees saw a medical hologram, simulation tools which assist in the design of transportation, and those simulations that are developed and used in the entertainment and gaming industries.

Students spent the morning in a general assembly that included greetings from community leaders like NCS President/Executive Director, retired Lt. Gen. Tom Baptiste, as well as prepared videos from Congressman John Mica and Senator Bill Nelson. They also heard from Modeling and Simulation panels made up of a variety of professionals ranging from physicians, professors and teachers, and even included some area high school students.

As part of the event, Orange County Mayor Teresa Jacobs proclaimed Sept. 29, 2013, as National Center for Simulation Day in recognition of the upcoming 20th anniversary of NCS.