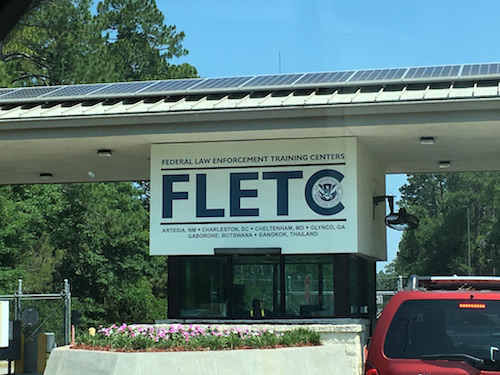 FLETC graduates an average of 60,000 students each year

On May 31 and June 1, several members of the Team Orlando Board of Directors visited the headquarters for the Federal Law Enforcement Training Center in Glynco, Georgia. The visit was twofold: to provide some insight on the Team Orlando mission and impact for those FLETC staff who have not had the opportunity to visit Orlando; and to give the Team Orlando BOD a chance to see first-hand the training done by FLETC and how they have leveraged some of the training developed by the military. 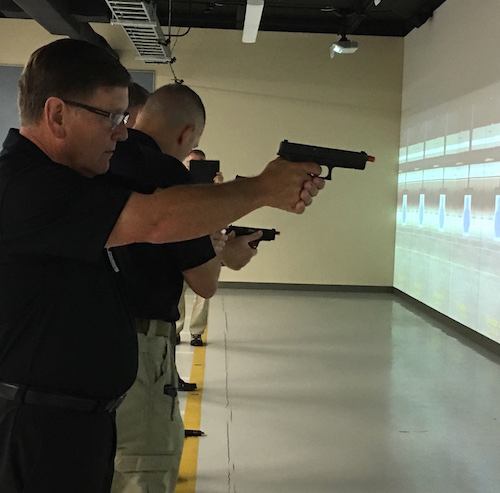 One of the stops for the Team Orlando board members was the virtual firing range. Lt. Gen. (Ret) Tom Baptiste, NCS president and CEO, practices some of the skills taught by the FLETC instructors.

FLETC is part of the Department of Homeland Security (DHS) and is the largest law enforcement training center in the county. Its headquarters are in Glynco, Georgia, where they occupy an old Navy base that is 1600 acres. It includes a myriad of structures with classrooms, dormitories, firearm ranges, driver training ranges, explosives range and fully functional mock port of entry, as well as forensic science labs and virtual firearms ranges.

It provides teaching and vocational instruction to more than 90 partner organizations covering a wide range of law enforcement and security personnel at the federal, state and local government level – and graduates close to 60,000 each year from all of their programs.

Patrick thanked Gritton, and said, “This partnership enables FLETC to make use of cutting-edge technology in law enforcement training, while providing Team Orlando insight on the unique needs of law enforcement.”

Neal M. Finkelstein, Ph.D., chief engineer for the Army Research Lab, Human Research and Engineering Directorate, was one of the Team Orlando board members to make the trip.

“I thought it was another outstanding visit to FLETC,” said Finkelstein. “To be in the presence of elite instructors and to see how their training curriculum continues to innovatively evolve with technology was very impressive.

“They offer programs that are world class and on the cutting edge, and I believe our Team Orlando modeling and simulation community can take a little pride in the fact that our truly unique partnership formed between Team Orlando and DHS FLETC over the last 13 years, has contributed in some part to their success. I can imagine what this partnership may bring to law enforcement training in the next 13 years.” 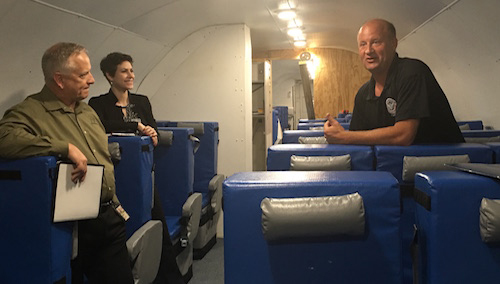 During the visit, the Team Orlando leadership had the opportunity to visit several of the training venues on the FLETC campus. The first stop was a building that mimics a hotel and restaurant, and is used to train law enforcement in the area of active shooters. Complete with role players and after action review, it’s a very immersive training exercise that can train both individuals and teams.

FLETC has several live and virtual firearms ranges, and the group’s second stop was at the virtual firearms range, where they had the opportunity to meet with instructors, learn about the facility, work on some basic safety and instruction for shooting, and then put it to practice. Not only have the virtual ranges saved FLETC millions of dollars throughout the years in firearms training, but they have seen the abilities of their trainees improve more quickly since shifting to virtual ranges early in the learning process.

Approximately three years ago, FLETC began instruction in forensic science. The building that houses these labs includes a variety of interactive, changeable crime scenes, as well as a photography lab, an automobile garage and an outdoor area for excavation instruction. This area also uses after action reviews to help students learn, through immediate feedback, what they are doing well and what needs improvement.

The students at FLETC are motivated and eager to learn, and probably don’t need a reminder of the important work they do, however in the Counter Terrorism Division’s intermodal training facility, there are reminders to each and every trainee why they are at FLETC, learning how to keep the Homeland, its residents, and themselves safe. One of those reminders is a memorial to the youngest victim of 9/11. Her picture is displayed above a glass case that houses her teddy bear she left with her grandparents the day her plane flew into one of the World Trade Center towers.

Branch Chief Mark Royer noted, “We have many young students here at FLETC who were small children when 9/11 happened. This just helps them understand more clearly the fight we’re fighting and why what they’re doing is important.”

The group then drove through Danis City, a multi-block “city” where live trainings take place. It has everything from a courthouse to a restaurant to a cul-de-sac neighborhood and a bank. It provides several options for training and, like many of the other venues, it is equipped with recording devices for after action reviews.

For the final stop, Mike Robbs, FLETC law enforcement technology liaison, provided a tour and overview of the Driver and Marine Division (DMD), a division in which he was an instructor and Branch Chief for approximately thirteen years.

Following the visit, Robbs said that FLETC was honored to have Team Orlando BOD members tour their facility and have the opportunity to speak with some of their staff. “I hope we can make this an annual event,” he added.