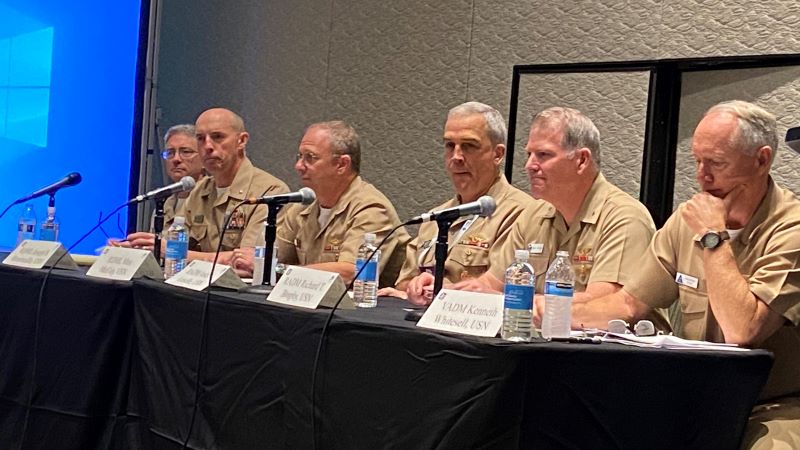 “We have got to deliver warfighting capability faster to the fleet than we are doing right now, said McCoy. “We need to do this while we concurrently deliver capability, work on tactics, and identify gaps.”

As sailors face an unexpected future, the U.S. Navy aims to ensure they can outthink and outfight any adversary while remaining the best trained and educated naval force.

The Navy is doing this by identifying deficiencies and gaps in training and augmenting the training at those sticking points.

“We are deconstructing the conveyor belt to get more people on and through at a faster rate,” said Brophy. “We’ve got the technology that identifies the strengths and weaknesses the trainees have and where they can become better.”

Brophy further explained that while the average time to fly solo in an airplane is 13 flights, with the right training, two people in the last month flew solo on their fourth flight. And, Brophy said, “they are more technically competent.”

“As we’ve matured the efforts and the outcomes,” said Whitesell, “we’ve had some pretty successful wins over the last two years. The airwing of the future is where we are going.”

Loiselle agrees and said there has to be a focus on increasing the range space – even if that increase is not in the physical world.

“As we talk about the airwing of the future, we are moving out to platforms and weapons with ranges that exceed the range space anywhere in the U.S.,” Loiselle said. “So we need to devise a system where a significant portion of the training will occur in simulators.”

“It’s about capacity,” said McCoy. “There aren’t enough ranges and enough time. The blend of LVC is critical to make sure everyone gets the training they need to be ready for deployment.”

One critical key to increasing training efficiency and proficiency is industry.

“We are looking for ways to partner with industry to mature the technology at the warfighter training centers,” said Hash. “Schedule is king, and we have to keep ourselves accountable. It’s not just doing what we were supposed to do, it’s doing what we said we were going to do.”

“We know what the pacing threat is doing in the Pacific,” said Whitesell. “The urgency and the scheduling is key. We need these things delivered on time.”