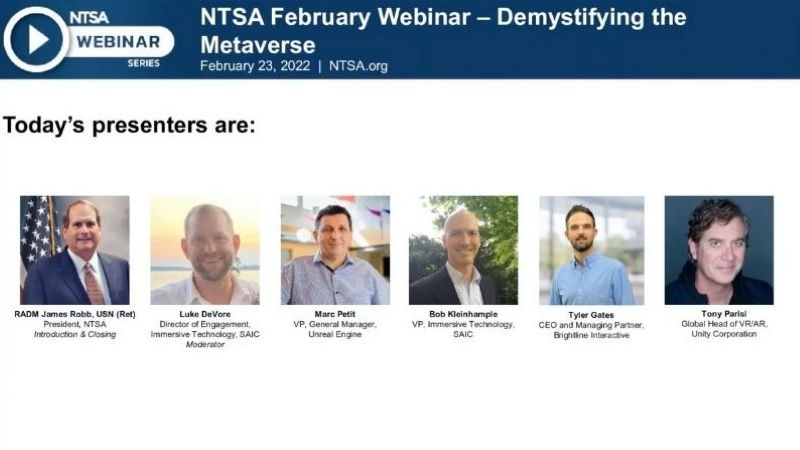 Metaverse. The term is in the news, in social network feeds, and discussed at workplaces. Yet, many aren’t familiar with the scope and breadth of its inevitable impact on work, life, and the modeling, simulation, and training (MS&T) industry.

During a National Training and Simulation Association (NTSA) webinar February 23, association president, Rear Admiral James Robb, hosted a panel of experts who defined the Metaverse and examined its applications and implications for society, the government, and the MS&T community.

Kicking off the webinar, each expert provided their own definition of the metaverse.

“The metaverse is simply the extension of the Internet to real-time 3D to deliver interactive and eventually immersive experiences,” explained Petit.

“It’s the next evolution of the Internet,” added Parisi. “It’s powered by real-time 3D, which is making our computers more useful, more fun, and making our lives better — and more safe.”

Gates said it’s much, much more than that. “It isn’t just an extension of something that you already know,” he added.

Kleinhample focused on the uniqueness of collaboration. “Metaverse is the 3D Internet providing real time 3D virtual presence anytime from anywhere with a collaboration capability for the improvement of people,” he said. “Metaverse gives lots of people that are in varying stages of involvement in the ecosystem, an ability to have a common language – a dinner table that we can all sit around and say, yes, we at least understand this much in real time 3D over the web.”

The panel described that the metaverse has been developing over decades with the creation of a variety of technologies and infrastructure, which are enabling an interactive and immersive environment on the web.

“What we’re seeing happening, is this amalgamation – this convergence of technological capability – that many people have been involved in at various stages,” said Gates.

Gates described the capabilities involved as advances in cloud computing, 3D assets, virtual reality, the 5G network, and the general technology infrastructure.  “All of these aspects of creation are elements of infrastructure that support what I would say is metaverse,” he said.

Petit noted that the work that the gaming industry has done on the hardware form factor for graphics has paved the way for game engines and has paved the way for the metaverse today. “We have this moment when we have all the enablers in place, and we can deliver immersive, interactive content on the web in a browser.”

Parisi said the game industry and military simulation were the first use cases that could justify significant investment in the advances in hardware and software needed. “And content creators know how to create in ways they haven’t before. So now we’re seeing explorations, new types of user interfaces, and new ways of interacting.”

These new ways of interacting are contributing to a more immersive military training environment, among others.

“Metaverse is the ability to take the actions that we’re currently doing in training and simulation and give them a place to operate that is interoperable,” said Kleinhample. “I think the government can really draw upon those key values to deliver and improve people with the virtual presence anytime from anywhere and collaborative aspects.”

Gates explained, “It’s obvious that if you are present inside a physical environment, that it’s going to be easier for you to take in information about that physical environment – not just with your eyes and your ears – but with your body, with proprioception, and with your understanding of space. This [the metaverse] lends itself so nicely to the idea of training and simulation, especially as you’re moving your body through space in the real world.”

The number of ways the technology encapsulated in the metaverse can be used is endless and the interoperability of the metaverse has real applications for training and simulation.

Gates described the ability of F18 pilots in Pensacola, Florida, to conduct training in the same environment with a landing signals officer on the deck of an aircraft carrier in the middle of the ocean.

“It allows us to close the gap of time and space, because it allows us to communicate and convey context from point A to point B in a much more compelling and immersive way,” said Gates. “Technologically, it’s now possible to host content, where you can transact very, very quickly.”

Kleinhample visualized an Emergency Operations Center to describe application of the metaverse.

“All this convergence can now all come together and be integrated for our benefit,” said Kleinhample. “I think there’s tremendous value to be realized today.”

Monetization is an important aspect to the development of metaverse technologies, according to the panel.

“There are products you can sell in this – customized capabilities that you can deliver to scale,” said Kleinhample.

He elaborated that achieving the desired human performance outcome requires the creation and evolution of virtual environments.

“That’s the role of system integrators who come under technical integrators and try to help customers achieve those capabilities,” said Kleinhample. “More often than not, they want their training where they are, and when they need it, so it’s that real time availability of that information and data that’s powerful to the human.”

“The challenge we have is building platforms that are safe, respect privacy, and allow you to move your data from platform to platform and do it in a way that can be regulated, fair, and transparent,” said Parisi.

And all these capabilities have a cost that must somehow be offset.

“The idea that branded content will not exist in this Metaverse is naïve,” said Parisi. “There are novel ways of having completely virtual-based revenue streams of virtual goods. That’s not even taking into account business to business types of ways to monetize, whether you’re selling products or offering training services, or other things that people can do in the commercial sector.”

For the government to leverage this technology, the panel discussed the effects on the acquisition of metaverse services and capabilities.

“The FAR [Federal Acquisition Regulation] is woefully outdated and woefully too small in terms of its ability to account for the type of interoperability that the military actually needs,” said Gates. “It’s almost like these requirements are actually restrictive to innovation. It sets up an interesting paradigm where you have technological advancement that is outpacing the military’s ability to purchase and that’s been happening for a decade.”

“I don’t think that the FAR is necessarily the hindrance,” responded Kleinhample. “It’s perhaps how the government may be asking for the technologies and the contracts they put in place. You need contracts that have an indefinite delivery/indefinite quantity (IDIQ) element to allow the engineering integration to occur as the technology is maturing. So, if you have very strict and rigid requirements defined, then you’re going to limit yourself. If you allow it to be more outcomes-based and open-ended with more agile development and iteration to the capability and end solution, you’re going to be much more successful and have the capability to achieve the outcomes you’re looking for.”

Petite added, “I think tracking of engagement and traceability of content is going to be a huge topic for the metaverse. It’s going to be the foundational technology that will empower new business models and empower the creator economy. So, of course, you need some sort of a smart contract.”

“These sound great in principle – true democracy at the touch of a button with a smart contract,” said Parisi. “And yet, what we’re finding is that they are quickly becoming autocratic. Without some controls or an actual legal contract that binds the folks outside the structures of the piece of code, they’re nowhere near ready for primetime to hit scale. But they’re all based on ideas that I think we can get behind. The more this can be automated, the more you can reduce the need for middlemen to feed off the food chain, and the more you can empower creators with downstream royalties.”

Summed up, the metaverse, much like the universe, is a contained entity with numerous moving pieces that are all expanding and growing exponentially. Participation in the metaverse is inevitable and accessing it will require the government to evolve as well.