The Wizarding World of UCF’s IST and Its Future

Home » The Wizarding World of UCF’s IST and Its Future 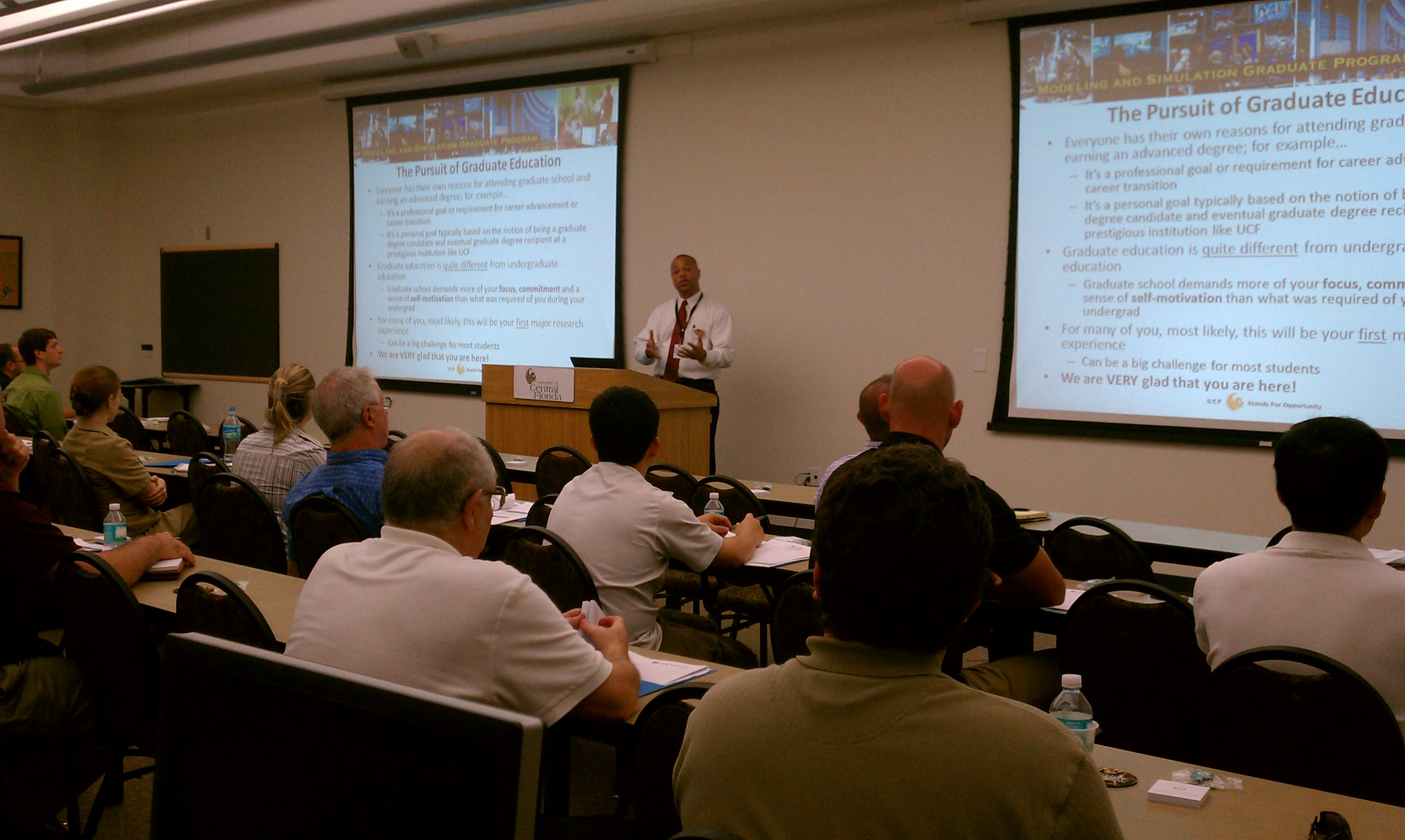 The University of Central Florida’s (UCF) Institute for Simulation and Training (IST) is a research institute that focuses on advancing human-centered modeling and simulation technology and increasing understanding of simulation’s role in training and education. IST sits in the heart of Orlando’s Research Park, globally known as the highest concentration of simulation and training related activities. IST’s primary focus is on human-in-the-loop simulation and modeling of human activity. With over 250 employees and a student-centered approach to learning, IST has cemented UCF as a center for academic excellence. Additionally, IST supports graduate programs leading to master’s and doctoral level degrees in Modeling and Simulation which are available to students of engineering, computer science, digital media, mathematics, psychology and other related disciplines. The university also offers a two-year program for working professionals: the Modeling and Simulation Professional Science MS Degree, and an online 15-credit-hour certificate program, Modeling & Simulation of Technical Systems. 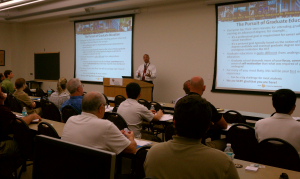 IST works within different areas such as healthcare, security, team behavior, robotics, training and more. “In one word, we are multidisciplinary,” Dr. Randy Shumaker, Director, IST stated. “We are a very different kind of team that continues to build on the expected and unexpected.” Dr. Shumaker, known in these parts as a highly respected leader and someone who has put M&S higher education on the map, became IST’s director in 2002 and has expanded the program into one of the largest, most diverse in the country. “There is no doubt Dr. Shumaker’s technical knowledge, focus on research and organizational skills have propelled IST into a great change agent,” said Dr. Peter Kincaid, Graduate Research Professor and Associate Director, M&S Graduate Program, UCF IST.
Within the last five years, IST has been published in over 480 publications with editors, co-editors or on review boards of over 51 different publications. “Unless you want to confine yourself, you need to partner with other people,” Dr. Shumaker stated. “Lots of departments within UCF and other nationwide programs offer research and diversity,” said Dr. Shumaker. “The human-centric piece is what we bring to the table.”

Some of the unexpected people you wouldn’t normally see around an M&S program are historians, anthropologists, live actors from theatre and people with museum backgrounds. “Many don’t know we have an M.D. on staff who works in healthcare applications, but is also the president of the local AUVSI chapter,” said Dr. Shumaker.

How do they get their funding? “Ninety percent of our funding is from contracts and grants,” Dr. Shumaker said. “One secret is that our people are always a little hungry for the next opportunity, the next application.” Their funding breakdown exists in three categories: Defense (50%), Federal (30%), and Industry and research foundations (20%). “I enjoy seeking the next area in which we will grow,” Dr. Shumaker said. “It is exciting to go hunting for new areas and applications.”

Dr. Shumaker and his staff say that their best kept secret shouldn’t at all be a secret. “Anyone is welcome to walk our halls, go into our labs and get a feel for what we are doing,” he says. “Our doors are open for conversation and we encourage this social aspect.” An example of this intended social interaction lies in the areas of the partnership buildings that were designed for meeting spaces, conference rooms and areas where people can eat lunch together. “We hold ice cream and pie and other food-related events to get people together to talk about what they are doing.” Dr. Shumaker, stated. “It’s like chemistry, you have to get the various elements together long enough so they can react to form something new.”

Although barely over a decade old, UCF’s Modeling and Simulation post-graduate programs have accomplished more than any other graduate program of its kind. “The M&S program began in 2001 on a shoestring budget with a few people,” Dr. Kincaid stated. “Over 12 years later, we have tripled in size and we stand proud as the number one M&S graduate program in the country.”

Dr. Kincaid has been with UCF for over 25 years and has seen the university grow. “A large percentage of the M&S workforce in the Central Florida area are graduates of the IST program,” Dr. Kincaid said. “We are making a significant impact on industry and government endeavors.” Many people don’t know that Dr. Kincaid originally laid the groundwork for the M&S program. “In 2001 when the program started to develop, we protected it and kept it proprietary,” stated IST Director Dr. Randy Shumaker. “Some departments at the university wanted the M&S program ‘as their own’ but Kincaid and others fought to protect the program’s multidisciplinary nature by preventing its administration by any one discipline, which is the very reason we were able to remain multi-disciplinary.” Dr. Kincaid says his daily interaction with the students keeps his mind focused on the future. “It is my favorite part of the job,” he says. “Talking with undergraduates that have their whole future ahead of them — being a guiding force for these young minds is exceptionally motivating.”

Since 2004, IST has awarded over 60 PhD’s and more than 240 master’s degrees to scholars. Brian Goldiez, Deputy Director, IST, was the first M&S graduate of the program. “Somebody had to be first,” Dr. Goldiez stated. “The main reason I went into the program is that there was some basic research I really wanted to do that was supported by the Navy and I felt it important to walk in the shoes of the researcher if I was going to contribute to managing research at IST,” said Dr. Goldiez.

Dr. Goldiez has been with UCF for 25 years and is the director’s supporting arm handling the more speculative work for the institute. He has two labs of his own and emphasizes the importance of having the ability to be competitive within certain funding agencies. “I like speculating and being on the leading edge,” he said. “Working with the students and being able to take technology and spinning it back and forth such as within the military and back to the researcher; watching versatility is exciting.”

What will the future look like? According to Dr. Shumaker, there is a need for M&S in every field. “In the field of history we have proven it,” he said. “We have also seen needs in psychology, politics, transportation, nursing — there are many others I can think of that could benefit from M&S. Healthcare is going to play a really big role in M&S’ future,” he said. “We believe that more can be done for patients such as doing more at home to help prevent having to see a physician.” Dr. Shumaker also stated that robotics and unmanned vehicles will play an important role in the forthcoming years.

There is no question IST will continue to improve M&S and will lead the way to maintain M&S graduate studies as a multi-functioning, distinct program. “There are many more paperweights to come,” said Dr. Shumaker, referring to the IST tradition of presenting each graduate with a memorable paperweight during a private ceremony. “Morale is good and we want it to stay this way.” Dr. Goldiez talks about the future of the program with much enthusiasm, “I love this place. One of the most interesting things about IST: it is like a halfway house. We encourage people to grow and leave it up to them to make their own nest in a self-motivating way.”