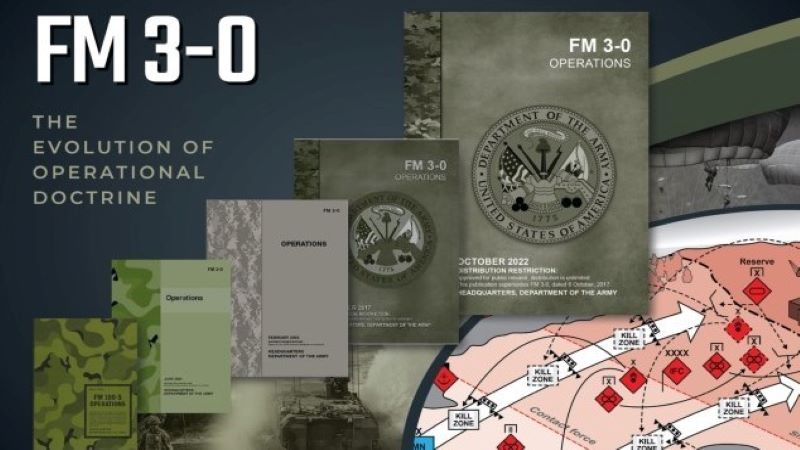 U.S. Army Training and Doctrine Command released the latest version of the Army’s capstone operations doctrine, Field Manual 3-0, Oct. 11, 2022, as senior leaders gathered at the 2022 Association of the United States Army Annual Meeting and Exposition, Oct. 10-12, in Washington D.C. The manual is available to view an download on the Army Publishing Directorate website.

The newly updated FM 3-0 establishes multidomain operations as the Army’s operational concept. The focus remains on large-scale combat operations against adversaries able to contest the joint force in the land, air, maritime, space and cyberspace domains. The updated doctrine defines multidomain operations as “the combined arms employment of joint and Army capabilities to create and exploit relative advantages that achieve objectives, defeat enemy forces, and consolidate gains on behalf of joint force commanders.”

“Training and Doctrine command drives change for the Army,” said Gen. Gary M. Brito, commanding general, TRADOC. “Doctrine shapes our thinking about operations and is foundational for integrating all modernization efforts in support of the Army,” Brito explained.

According to Rich Creed, director of the Combined Arms Doctrine Directorate at Fort Leavenworth, Kansas, observations from recent conflicts inspired several updates. Among those changes is a deeper understanding of the current operational environment through three dimensions — physical, information and human — and five physical domains — air, ground, space, cyberspace and maritime.

“This update to our operations doctrine is just one evolutionary step in how we need to adapt to deal with current threats,” Creed said. “We may have to operate from a position of disadvantage and that should drive changes to our organizations, acquisition priorities, and training.”

The Army has had four significant operational concepts since 1986. Each has built on the earlier concept and adapted to changing operational environments. While AirLand Battle focused primarily on threats in Europe, full spectrum operations in the early 2000s recognized Army forces did more than operate during big wars against big threats.

Unified land operations as an operational concept entered the lexicon in 2011, recognizing the lessons learned during the Global War on Terror, even as it acknowledged the changing threat environment and an increased likelihood of large-scale combat operations. Multidomain operations represent a maturation of capstone concepts and recognizes the need to deal with threats that have capabilities specifically designed to defeat U.S. forces across the competition continuum.

To ensure readiness and increase understanding of the new operations doctrine, the Army will use mobile training teams to introduce the new FM 3-0 to leaders responsible for professional military education, at the combat training centers, and in the operational force. Subject matter experts at the U.S. Army Combined Arms Doctrine Directorate are also developing a series of training materials and presentations designed to augment mobile training team support to units.

Brito emphasized that the new FM 3-0 will have an impact across the force and encouraged every Army leader to read, understand and use its concepts in training, education and worldwide operations.

“The TRADOC team is committed to building the Army of 2030 down to the Soldier level through training, education and exercising our foundational operations doctrine,” Brito said.