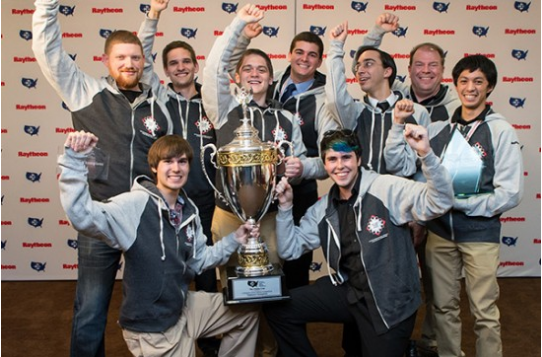 The winner is University of Central Florida! The team’s photo appeared in Times Square in recognition of their excellence.

The eight-member team, which began as a grassroots effort in 2012 to educate the community about cyber attacks and how to defend against them, has made a real impact in the collegiate cyber defense team world, competing for the first time in 2013, where they placed 10th, and began their journey to a 2014 national title. In just two short years, the ‘club’ has formed a competitive team within itself, that is winning and attracting national attention for themselves as well as University of Central Florida.

“The team’s strength lies in their teamwork, cross-training, and dedication to continue learning and improving. Seeing UCF bring home the Alamo Cup (championship trophy) is priceless,” said Thomas Nedorost, the team’s faculty sponsor and a computer science lecturer. “I am proud and honored to be able to work with this extremely talented group of students.”

The members on the winning team are Carlos Beltran, Alexander Davis, Kevin DiClemente, Grant Hernandez, Austin Brogle, Jason Cooper, Mark Ignacio and Troy Micka. Although the competition did not offer a cash prize, each member will have the opportunity to travel this summer to tour Raytheon’s Government Cyber Operations center near Washington, D.C. They also experienced celebrity status when their team photo was displayed in Times Square last week in recognition of its excellence.