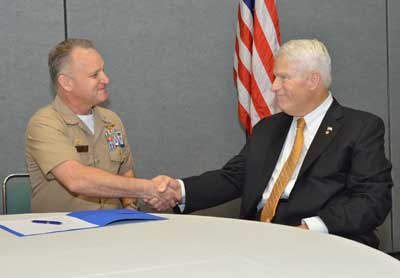 The University of Central Florida and the Naval Air Warfare Center Training Systems Division signed an agreement on Dec. 2 that will give UCF students more opportunities in the cutting-edge field of simulation and modeling while providing a boost to the industry locally.

UCF President John C. Hitt and Capt. Wes Naylor, commanding officer of the Naval Air Warfare Center, signed the agreement during the Interservice/Industry Training, Simulation and Education Conference – the largest modeling and simulation for training event in the world. The conference takes place each year at the Orange County Convention Center drawing 14,000 to 15,000 attendees.

“We are proud to be long-time partners with the U.S. Department of Defense,” Hitt said. “We know this industry is essential to our nation’s defense and the growing innovation economy of Central Florida and our Sunshine State. This agreement we formalize with the Naval Air Warfare Center Training Systems Division in Orlando opens broad new frontiers for research and innovations that stand to bolster the missions of the Center and of UCF.”

Among the benefits of the agreement: Employees from both institutions will be able to share laboratories and other facilities, scientists at both institutions should be able to expand their collaborative work, and the agreement opens the potential for more joint projects and other long-term benefits to both parties, said Randall Shumaker, director of UCF’s Institute for Simulation and Training. IST has worked with the armed forces for years to help develop training programs that train military personnel and also help keep them safe in conflict zones. 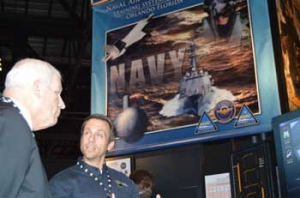 The benefits for the Navy include the ability to help prepare future scientists and engineers, get a non-military perspective on projects, and collaborate with other scientists specializing in simulation and training.

UCF students will also benefit from internships and the community will benefit as the two institutions explore ways to enhance research by jointly pursuing funding for projects of significance and impact. Other new initiatives are likely to follow as the partnership grows and matures over three years.

“The Naval Air Warfare Center has been in the Central Florida Research Park for over 25 years and our next-door neighbor, the University of Central Florida, has been a fantastic informal partner up to this point of time,” Naylor said. “Today we formalized an over-25-year collaboration between the Navy and the University of Central Florida to help develop technologies that will train our sailors, Marines, soldiers and airmen in better ways so that they can go out and do the business of the nation, so that they can return safely home to their families.”

UCF has a similar partnership with the U.S. Army. Central Florida is unique because it is home to the procurement commands for the U.S. Army, Navy, Air Force, Marines and Coast Guard, commonly referred to as Team Orlando. More than $4 billion worth of contracts go through the commands here each year, according to the Orlando Economic Development Commission.
Team Orlando works together with the goal of improving human performance through simulation.

According to the group’s website “Team Orlando is a unique collaborative alliance formed by U.S. leading military simulation commands, and supplemented, supported and augmented by academic and industry leaders in the modeling and simulation, human performance and training domains.”