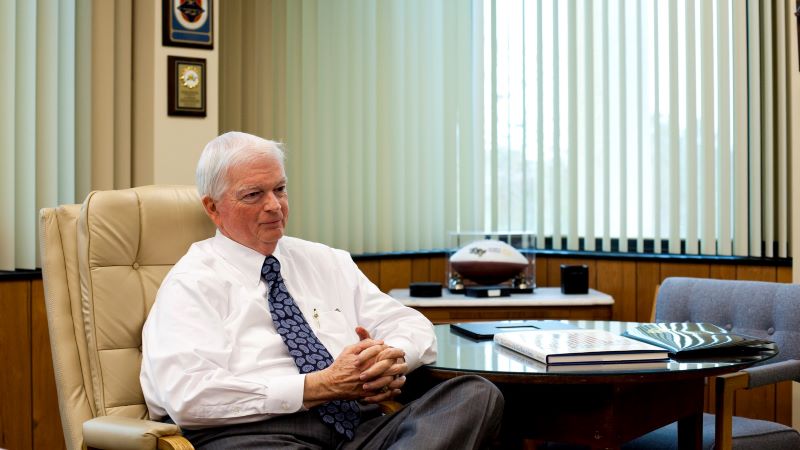 Senior Vice President Emeritus Dr. Daniel Holsenbeck who served UCF for 35 years as a senior leader, advisor and strategist, passed away Dec. 5 with his family at his side.

“Dr. Dan” helped to foster deep relationships across the community and across the State of Florida that propelled the university’s rise in quality and reputation.

He helped shape many of the big ideas that have transformed UCF into the place it is today including championing the region’s modeling and simulation industry and UCF’s partnerships with the military. He helped to secure additional state funding for UCF and also the College of Medicine and UCF Downtown in particular.

And as an instructor he delighted being in the classroom with students, helping to shape future public relations and government relations professionals.

Holsenbeck, 80, reported to five UCF presidents before retiring in December 2019. His impact on UCF and throughout Central Florida will be felt for generations.

A celebration of life service will be held on Saturday, Jan. 7, 2023, at 3 p.m. in the UCF Fairwinds Alumni Center. All are invited to attend.

“Dan’s political and communications skills are unmatched in the history of Florida higher education,” says former UCF Board of Trustees Chairman Rick Walsh ’77 ’83MS. “His wise counsel and key relationships helped UCF in immeasurable ways. Simply put, without ‘Dr. Dan,’ UCF would not be the institution it is today.”

Holsenbeck was blessed with a loving family whom he adored and admired. He is survived by his wife, Dr. Joyce Clampitt, a former UCF administrator, and his daughter, Amy Clampitt-Holsenbeck, a board-certified physician assistant and pediatric health specialist. He was preceded in death by his son Alan Clampitt-Holsenbeck.

He also greatly appreciated the important role nonprofit organizations play in the community and volunteered his time generously on several boards. One of them was the board for Kids House of Seminole County, which is dedicated to preventing child abuse and helping child abuse victims and their families.

Former House Speaker Steve Crisafulli ’96, a UCF graduate who represented Brevard County in the House for eight years, met Holsenbeck in 2008 while running for office. Crisafulli says he admired Holsenbeck’s focus on his family and faith as well as how deeply he cared about the university and students in particular.

“He wore the badge of the university proudly and advocated on behalf of the university passionately,” Crisafulli says. “I also had the opportunity to speak to students in his classes, and I found right away there’s a connection he had with them. He made them understand and be more passionate about the governmental side of what they were learning about the state.”

Crisafulli also praised Holsenbeck for establishing the UCF Legislative Scholars program, which he described as the “best program” of its kind in Tallahassee. Created in 19 years ago, the program enables students to augment their academic learning by working full time in legislators’ offices during the annual legislative session. Since then, 220 scholars have learned the “ins and outs” of Florida’s legislative and public policy making arena, learning directly from legislative staff, governmental agencies and lobbying groups while gaining valuable governmental experience.

As an instructor in the Nicholson School of Communication and Media, Holsenbeck delighted in helping to shape future communications and marketing professionals. He regularly invited guest speakers from communications and government to share their expertise and how they handled real-life scenarios. Holsenbeck continued to teach into this year.

“Students loved Dan’s classes because he brought actual examples and situations into the classroom that brought academic concepts to life,” says Professor Robert Littlefield, founding director of the Nicholson School. “In the public relations courses he taught at both the graduate and undergraduate levels, students left better prepared and ready to face the challenges of their careers. He was generous, supportive, strategic, and collegial. We certainly will miss his presence as a faculty member in the Nicholson School of Communication and Media.”

A former captain in the U.S. Naval Reserve, he was honored by the Naval Air Warfare Center Training Systems Division, which named a Navy jet in his honor in recognition of his dedication to growing the Modeling, Simulation and Training community.

George Cheros, president and CEO of the National Center for Simulation (NCS), credited Holsenbeck as the “principal visionary for the Partnership Complex” that brings UCF researchers and military agencies together in the Central Florida Research Park, as well as his success with obtaining funds for the five partnership buildings and for security enhancements to protect the military buildings in the Research Park.

“Most of us will never know exactly how much work Dan did behind the scenes to make UCF, the CFRP and the Modeling and Simulation industry what it is today,” Cheros says. “He leaves a tremendous legacy and as president and CEO of NCS, I have a deep sense of gratitude to him.”

Holsenbeck earned a bachelor’s in mathematics, with honors, from Auburn University, a master’s in education from Johns Hopkins University, and a doctorate in higher education management systems from Florida State University.

UCF awarded Holsenbeck an honorary doctorate degree in 2019 in recognition of his distinguished service to the university and Central Florida, as well as in the military.

He was active in local and national civic and professional organizations, including the Central Florida Partnership, the Economic Development Commission of Mid-Florida, the board of directors of Visit Orlando, the Orange County R&D Authority (chairman, 1999-2000) and the Council for Advancement and Support of Education.

Holsenbeck served on the CASE National Board of Trustees and was chairman of CASE’s National Commission on Government Relations. He was chairman of the CASE National Association of State Universities and Land-Grant Colleges and American Association of State Colleges and Universities Task Force on State Relations from 1996-1997. In 1999, Holsenbeck received the highest national recognition for his state relations activities, the Swede Johnson Award sponsored by CASE, NASULGC and AASCU.

He has served on the Boards of Kids House of Seminole, Work Force Central Florida, the UCF Foundation, the National Center for Simulation, the UCF Alumni Association and the Board of Visitors for the FAMU College of Law.

Holsenbeck was director of basic enlisted mathematics for the U.S. Navy Nuclear Power School from 1967-69. He served as the principal civilian advisor on college and university teaching and testing to the Chief of Naval Education and Training in Pensacola, Florida. In that capacity, he conducted teaching seminars for all NROTC Navy and Marine instructors from 1971-1998. As a drilling reservist, Holsenbeck held four commands in Orlando and Montgomery, Alabama.