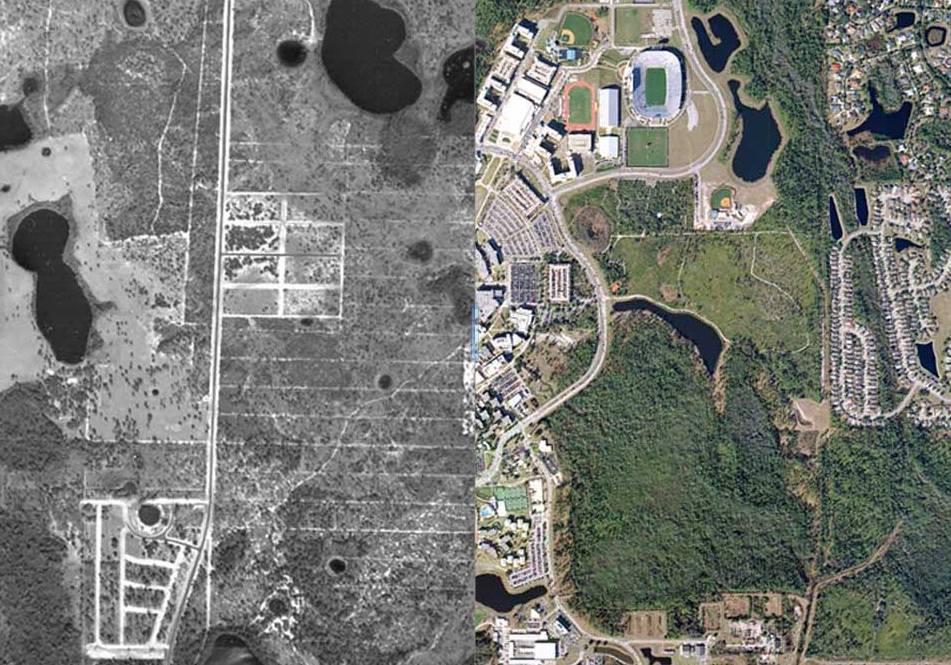 Long before Walt Disney World was here, a small, quiet synergy was brewing that no one would guess would become the world’s simulation and training headquarters. It was May of 1961, John F. Kennedy was President and things were changing. President Kennedy declared that America was going to land a man on the moon by the end of the decade. Most people in Cape Canaveral, Florida, knew this would happen and they would play a part in this historical moment.

A few years later, the state realized Central Florida needed a university to support these technical jobs and Florida Technological University (FTU) was formed, located halfway between Martin Marietta and the Kennedy Space Center. “There were time consuming challenges that took place such as bond financing, legislative changes and political maneuvers, but somehow it all came together,” stated Joe Wallace, Executive Director, Research Park Authority (RPA). “The way it was done, no one could duplicate it exactly the same way if they tried.”

In 1968 FTU officially opened its doors and started its very first program: computer science and engineering. FTU worked closely with Martin Marietta and the Cape to support the two industries.

Meanwhile, a few miles west of FTU, an Air Force base sat in the middle of Orlando’s suburbia. The 1,500 acre base, built in the late 1940’s, was used for Air Force training. “America was gearing up for the Vietnam War and the base began to serve as headquarters for air rescue and recovery service,” said Wallace. “During Vietnam this base operated as a place where helicopters performed rescue missions.” In 1965 the Air Force decided that the base wasn’t all that productive because they didn’t have airplanes or runways, so they left it vacant.

In what was a political deal in 1966, The Honorable Robert H. B. Baldwin, then Under Secretary of the Navy, announced that the city of Orlando had been chosen as the site of the Navy’s newest and most modern training facility. Orlando was selected because of its year-round climate, availability of transportation, sufficient family housing, and availability of the vacant Orlando Air Force Base. Therefore, the U.S. Navy subsequently took the closed facility and made it their headquarters for training called the Naval Training Center Orlando (NTC).

Shortly thereafter, the Navy command moved from the Guggenheim Estate in Long Island, New York to be collocated with the Naval Training Center as part of the Department of Defense Base Closure Program. (At the time, the Guggenheim Estate was the location where the Army and Navy were buying their simulators. The two branches had signed an MOU in 1950, which is the longest standing agreement in DoD history.)

Consequently, around the same time that FTU officially opened its doors, the NTC moved in to the former Air Force base. FTU had a substantial relationship already formed with the Kennedy Space Center and Martin Marietta, and were enthusiastic to reach out to another area called simulation. “Charlie Millican, founding father of FTU and its first President, made contact immediately,” stated Wallace. “Millican quickly realized the Navy had engineers and a connection was formed.”

FTU, designed around computer science, was thrilled to task the needs of the Navy. The university got into simulation and training rather rapidly, and simulation became the third leg of FTU. “No one expected the Navy base to move here,” stated Wallace. “But when they did they brought hardware engineers, software, engineers, technical writers, computer engineers, and more. Bringing them into the curriculum wasn’t a huge stretch from what they were already working with.”

For the first twelve years FTU had grown into a campus life of around 10,000 students and continued their outreach efforts to different industries. In the late 70’s, the FTU leadership, lead by Trevor Colbourn, suggested they take a model like Research Triangle Park or Silicone Valley and invite companies to move close to campus.

At the same time, since the university had grown so large, the decision was made to change the name to the University of Central Florida (UCF). “In 1980, Trevor Colbourn, UCF’s second President, made the official move to help bring businesses close to the campus,” said Wallace. “In what was a very wise decision, they decided to save the northeast corner of the university’s land for future growth.” This land now houses a 30,000 seat football stadium, baseball and soccer fields.

Colbourn had his eye on an area of land just south of the campus that had been planned for a brand new neighborhood. The housing recession caused the property to go bankrupt and, with a private partner, UCF made a move to acquire the land.

For over a year, Les and Ralph managed the CFRP. However, with UCF only being 13 years old, they were too busy to manage the authority, and with very little foundation money it was hard to task both the university and the RPA. Accordingly, they actively sought a local businessman to take over the reign. In 1986, Joe Wallace officially became the Executive Director of the CFRP.

CFRP formed a nine person board, two representatives from UCF, five from the business industry and two seats from legislature. The RPA’s board was tasked to manage the 1,027 acres.

Around the same time, UCF and CFRP discovered that the Navy base was finally approved for funding for a new building. With the help of Senator Bill Nelson, UCF and CFRP approached the Navy with an offer they couldn’t refuse. They proposed 40 acres of land free of charge inviting the Navy to move out to Research Park. “The Navy considered it and did the math,” Wallace said. “The deal would cost them the same amount of money, the three parties were already working closely together and the Navy liked the idea where they could walk back and forth with no gates.”

When the Navy accepted the offer, a center of excellence was created with Academia, Government and Industry all in one location. In 1988 the Navy opened its doors and CFRP was officially positioned to run like the business model they had dreamed about. “The Navy was the third building in the park and after it opened the whole Research Park came to life,” stated Wallace.

Twenty-five years later, East Orlando isn’t considered a primitive part of town any longer. The 1,027 acres of land in Research Park is two-thirds of the way built out. Fifty-eight buildings are located with a workforce of 10,000 people engaged in various high tech fields. “Our mission is two-fold,” Wallace stated. “We want companies to work with the university and we want to create jobs.”

Many partnerships have blossomed in Research Park. The government benefits from the academic research. UCF benefits from the real world industry experience. “This also helps UCF get more research money,” said Wallace. “And where you get research money you get better researchers, where you get better researchers you get more graduate students and where you get more graduate students you get more companies.” Ultimately, everyone is training the future workforce. “It took us a while to get that critical mass but we got there and it works,” Wallace said. “We have room for another 20 buildings and another 7,000 people. Hopefully over the next decade we will fill it up.”

The future holds promise. Joe Wallace and his Board of Directors have discussed it regularly. “When Research Park is full we will start a waiting list,” he stated. “There is not a whole lot of land around so we will, in due course, go into ‘tear down and trade up mode.’ Thirty years ago the density here was supporting a different market.”

Wallace added, “Because the density is changing, we are now in an urban development look, and so it probably makes sense for the older buildings to renovate into a different type of building. Companies here rarely fail. They get acquired.”