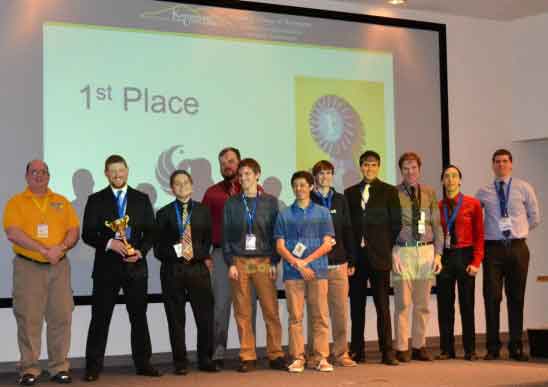 What’s even more impressive is that the team has only been in existence for two years. This year, the team also earned two specialty awards at the competition: “Best in Business” and “Best in Defense.”

“I’m extremely proud of them,” said faculty sponsor and computer science lecturer Tom Nedorost. “They put in a lot of hours getting ready, often practicing late into the night during the week and all day on Saturdays. I know they are very grateful for all the people who support them.”

The competition was held March 31 –April 2 at Kennesaw State University in Georgia. Teams from 18 universities entered the qualification round this year and the top eight teams were invited to compete at this regional competition. Raytheon, the U.S. Department of Homeland Security, and the U.S. Army Intelligence & Security Command sponsored the event.

The competition consisted of each team setting up a small corporate network for the fictional HAL Corp. Throughout the three-day event, the teams worked to keep their business services operational while defending against a barrage of continuous cyberattacks by a group of 20 experienced penetration testers (professional hackers) who volunteer their time to make this event possible.

For some, such as UCF team captain Carlos Beltran, the experience was exciting, but he said he knew what to expect because he was on last year’s winning team. For others, such as team co-captain Jason Cooper, it was a brand new adventure full of adrenaline.

The team will travel to San Antonio on April 25-27. The competition sponsors include Raytheon, the U.S. Department of Homeland Security, Splunk, and Walmart among others. Last year, the team took 10th place at the national competition.
Team members will spend the weeks leading up to the competition practicing and continuing their weekly outreach to the public.

Beltran and several others founded the Collegiate Cyber Defense Club in 2012 with the goal of fostering an information security-aware generation in Central Florida. While they focus on competition, they also host weekly meetings to educate the general public.

Because of recent cyberattacks against Target and Neiman Marcus, where credit card and other personal information was stolen, to basic risks such as not securing a Wi-Fi connection at home, the team tries to educate the public by dropping the technical jargon and offering tips the average person can use.

The team’s skills and outreach activities are drawing the attention of local industry. Other security professionals, such as Grooveshark, Raytheon, and Protiviti, have presented to the club this year.