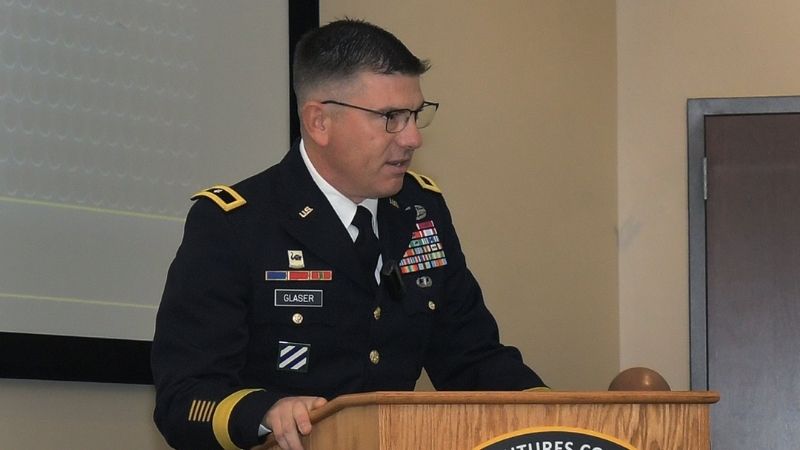 Richardson highlighted Glaser’s leadership abilities and noted his inquisitiveness and knowledge prepared him for his role as the director of the Army STE CFT, which is responsible for creating immersive, realistic and demanding training experiences for our Soldiers. “The team is incredibly lucky to have Will as their new director,” Richardson said. “Having sharp minds at the forefront of such efforts is critical for our Army. There’s no doubt that Will is the right person with the right fortitude and functional skill set that will lead the Army in this field.”

“Will is the first ever, in the history of the United States Army, to be a Functional Area 57 [Officer] (FA-57) and be promoted to brigadier general,” Richardson said. “That’s a real big deal. I cannot think of any other officer in today’s army worthy of this distinction and honor.”

Glaser, a graduate of the United States Military Academy at West Point in 1993, commissioned as a second lieutenant into the Armor branch. He attributed much of his success to his wife Kathy of 26 years, their three children and family for their support.

During his remarks, Glaser reflected back on his time as an FA-57 Officer. “I have had a lot of great jobs in the United States Army,” Glaser said. “I’ve tried to seek out hard jobs and do them well — but, all those jobs kind of pale in comparison to what we are about to embark on now. The cross functional team is responsible for setting the training environment for the future Army. I ask you what could possibly be more important in our United States Army? I dare say nothing. I am confident because we have a tremendous team here in Orlando and I look forward to everything we are going to accomplish here.”

Over a hundred guests watched the ceremony in person while hundreds more tuned in virtually.

Glaser attended the Naval Postgraduate School and received a Master of Science in Modeling, Virtual Environments, and Simulations. He is the first Simulation Operations Officer to achieve the rank of Brigadier General. The Functional Area 57 Simulation Operations career field provides the Army officers who specialize in creating realistic simulation environments where leaders plan, train, test, and experiment in support of readiness, modernization, and enhanced decision support. FA-57s are the Army’s experts at translating complex concepts into viable readiness and modernization solutions by leveraging new and emerging technologies. Simulation Operations Officers are highly effective at planning, preparing, communicating, and executing simulation support at the tactical, operational, and strategic level. Army functional areas are a grouping of officers by technical skill or specialty.

Located in Orlando, Florida, the Synthetic Training Environment Cross-Functional Team’s mission is to rapidly expand the Army’s synthetic training environment and increase distribution of simulations capabilities down to the company level. The STE will enable tough, iterative, dynamic and realistic multi-echelon combined arms maneuver, mission rehearsal and mission command collective training in support of multi-domain operations. STE CFT will deliver collective training, accessible at the point of need, to support operational, self-development and institutional training for Soldiers. The STE will provide complex operational environment representations anytime and anywhere in the world. The CFT will allow the units the repetitions necessary to accelerate individual skill and unit task proficiency for achieving and sustaining readiness. Content and photo courtesy of STE.