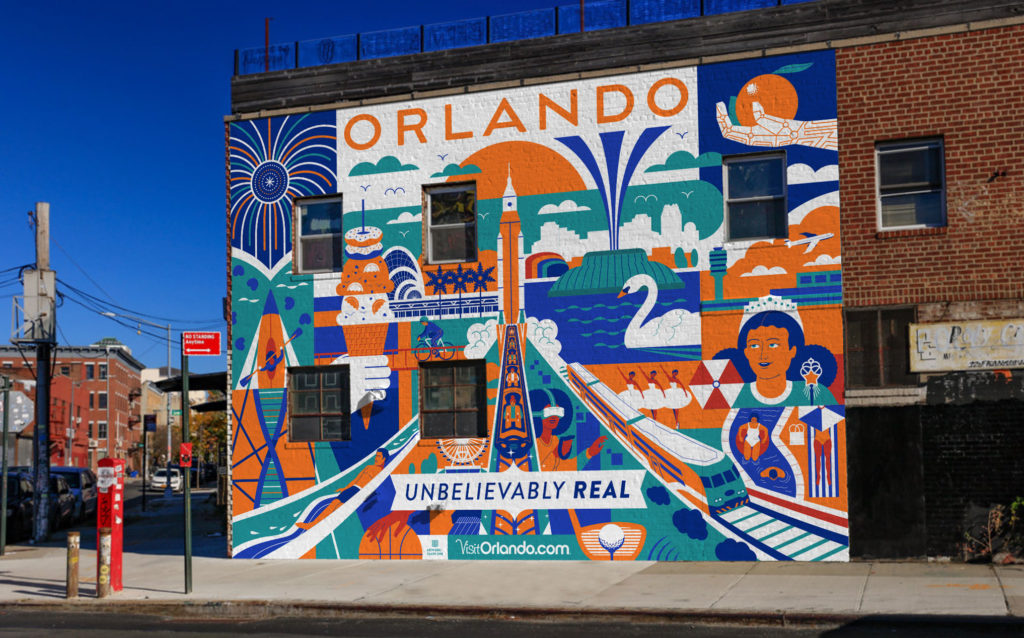 Visit Orlando, The Official Tourism Association® for Orlando, and Orlando Economic Partnership, the economic and community development organization for the region, today announced the launch of one singular, comprehensive and consistent brand to promote the destination and region. The new “Unbelievably Real” brand platform is the product of a first-of-its-kind partnership between the two organizations and was developed to speak to all audiences — leisure visitors, meeting planners, meeting attendees, travel professionals, site selectors, business relocation stakeholders and talent.

“When we combine forces and invest in economic and community development and market Orlando as a destination for tourism and meetings, we can strengthen our brand identity and take the region to the next level.”
Orange County Mayor Jerry L. Demings

“Our ability to collaborate and join forces allows us to build a better economy, a better experience and a better community for all. Collaboration is built into the DNA of our great city and region,” said City of Orlando Mayor Buddy Dyer.

“Our audiences intersect and, in order to have more impact on a consistent basis, we have created a compelling message on the reasons to visit, move or start a business in the Orlando region.”
City of Orlando Mayor Buddy Dyer

“With the evolution of the Orlando region, shifts in travel and how people work, and changes brought on by the pandemic, we believe now is the perfect time to bring together our collective resources,” said Casandra Matej, president and CEO of Visit Orlando.

“Unbelievably Real combines what is both fantastical and authentic about our unique destination to tell a holistic story.”
Casandra Matej, president and CEO of Visit Orlando

Based on research and tested with a variety of audiences, the Unbelievably Real global brand’s goal is to highlight the region in a new way that tells a complete Orlando story. A Florida-based team from the marketing agency Razorfish served as the lead creative talent to develop the comprehensive brand.

“While we may be talking to different audiences such as vacationers, meeting planners and attendees, CEOs considering moving their businesses or employees considering a move to work for one of our companies, research has supported that this new brand can create a connection with all of these groups.”
Tim Giuliani, Orlando Economic Partnership President and CEO

Starting today, tourism-focused advertising showcasing everything from Orlando’s theme parks and attractions to outdoor adventures and world-class dining will run in TV commercials and across digital and social channels to promote summer and fall travel to Orlando. The campaign will also be augmented with outdoor boards in key markets such as New York, Boston and Chicago and promotional programs with NBC, Univision, iHeart and Urban1.

International audiences will follow with the rollout starting at U.S. Travel Association’s IPW conference June 4-8 in Orlando. This fall, a campaign targeting meetings planners and attendees will launch at the IMEX meetings industry show.

Future business and talent recruitment efforts will be featured on InvestOrlando.org, with new storylines and content focused on targeted industries in Orlando through the lens of Unbelievably Real. It will also drive business development meetings held in target markets like San Francisco, Chicago and New York with company executives, entrepreneurs and site selectors. New Unbelievably Real Orlando creative will be installed later this year in high-traffic venues like Orlando International Airport, Orlando Sanford International Airport and the Orange County Convention Center.

One of the first examples of the campaign is a mural designed by Orlando-based artist Clark Orr. Under the Unbelievably Real theme, the new mural brings to life how all aspects of the region shine, from tourism highlights like nightly fireworks and adventures on our waterways to innovative technologies such as simulation and rocket launches. The mural is on display on a painted wall in Brooklyn through July and will appear in Orlando in the coming months.

Planned as a multiyear initiative, the two organizations also launched O.U.R. Culture Project (Orlando Unbelievably Real Culture Project), to engage with Orlando residents and cultivate new methods to showcase pride in the Orlando region. Future activities will include the creation of a new symbol for Orlando and the installation of a permanent Orlando sign to become an interactive and iconic backdrop.

The first initiative in the O.U.R. Culture Project is focused on gathering images from those who know Orlando best: its residents. Starting today, Visit Orlando and Orlando Economic Partnership have launched The Unbelievably Real Sweepstakes, where locals upload images on what they feel is Unbelievably Real about Orlando for a chance to win an Unbelievably Real staycation. Entries must be received by May 31, 2022, at OrlandoUnbelievablyReal.com.

One of the first examples of the campaign is a mural designed by Orlando-based artist Clark Orr. Under the Unbelievably Real theme, the new mural brings to life how all aspects of the region shine from tourism highlights like nightly fireworks and adventures on our waterways to innovative technologies such as simulation and rocket launches. The mural is on display on a painted wall in Brooklyn, New York now through July and will appear in Orlando in the coming months.