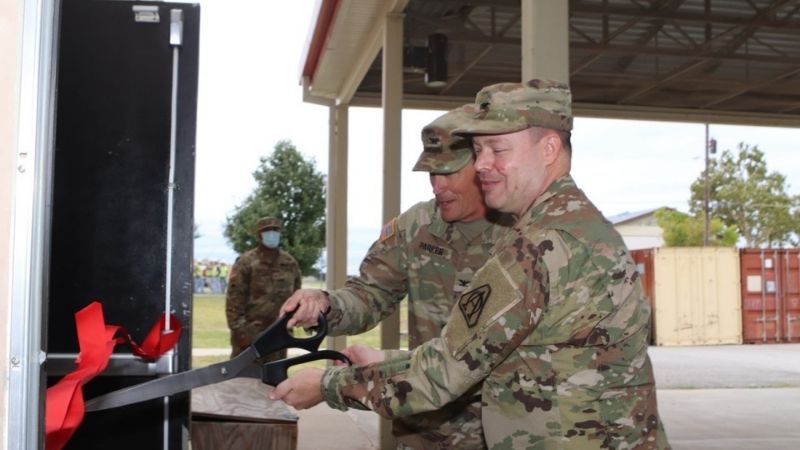 Stepping into the dome is a gamer’s dream come true with a 360-degree virtual reality battlefield environment to include ground vehicles and visual aircraft recognition. But the dome isn’t for gamers, it’s a cutting-edge training facility for air defense Soldiers to gain necessary experience or refresh their skills and gain confidence with man-portable air-defense systems and prepare them for combat.

“The new dome offers a tremendous capability to train Soldiers and greater definition to see the targets we’re looking at and to distinguish between friendly and foe aircraft,” said Col. Cory Berg, commander, Program Executive Office of Simulation Training and Instrumentation (PEO STRI). “There’s a brand new chandelier that’s inside with 14 projectors with the capability they put in there with our partner Blue Halo to provide great dome interaction which allows two Stinger teams to train at the same time.”

According to Col. William Parker, commander, 30th ADA Brigade, “the level of graphics allows you to do better visual recognition for enemy flight threats as well as to protect friendly assets.”

Parker said the new training dome allows the instructors to adjust to different environments and various scenarios that include varying terrain such as desert, forest or urban, as well as moving aircraft targets and countermeasures.

“We are expanding capability and readiness, and I can’t wait to see our Soldiers get in there and start getting after it because the graphics that I saw are incredible. You no longer have those eight miles of cables coming down from the missile itself,” said Parker. “It’s much more realistic, and we couldn’t have done it without the help of our partners in the industry getting this capability to where it’s at right now. But now we’re able to get after that tough realistic training that we just talked about.”

The rebuilt training dome ensures ADA Soldiers have a modernized system with aircraft models at a higher fidelity that provides very realistic training for the Soldiers in a 360-degree display area, said Parker.

“We’re proud to work with our Air Defense Artillery School and the Army Capability Managers that are in the air defense brigade and the Directorate of Training and Doctrine here at Fort Sill, the Fire Center of Excellence,” said Norbert Granchi, assistant program manager, PEO STRI, who works on virtual training systems.

“We have worked on two of the Stinger Training Domes now: one for the National Guard and this one at the Fires Center of Excellence,” said Granchi. “We are working to procure and field 35 individual trainers which consist of goggles with a virtual reality system. Five of the goggles will be right here at Fort Sill.”

Granchi said there are cost benefits to using virtual trainers versus live-fire training events. “First you don’t have the expenditure of live munitions and you don’t have the restrictions of firing time. It allows Soldiers to train more frequently and saves the Army money while providing training opportunities.”