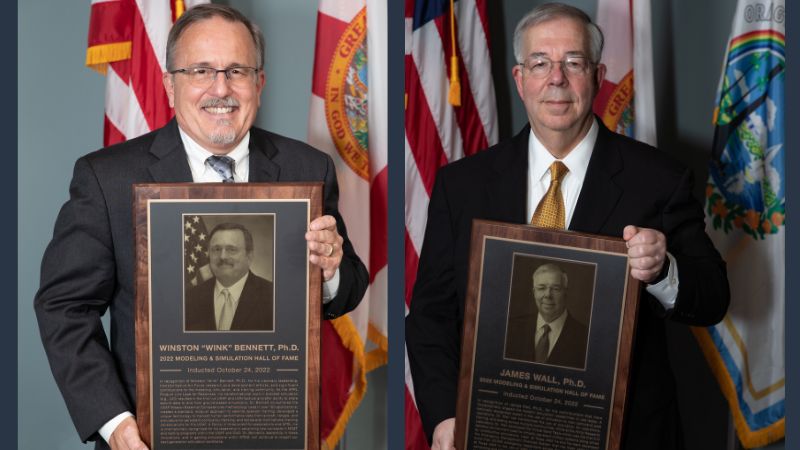 The NCS Modeling & Simulation (M&S) Hall of Fame was established in 2014 to recognize the efforts and contributions of individuals who are outstanding in the M&S field. Bennett and Wall are now two of its 36 total pioneers who have received the honor.

“The technology and applications, which in many ways, were inspired, developed or spearheaded by these [36] individuals on the [Hall of Fame] wall, have provided excellent tools and training support to allow our warfighters to encounter almost any type of situation imaginable – not to mention the countless lives that have been saved,” said George Cheros, NCS president and CEO, during his opening comments. “Now, after several decades of growth and development, our region is known as the epicenter of the world for modeling, simulation and training.”

After initial introductions, Dr. Neal Finkelstein, NCS chief operating officer, emceed the ceremony. Bennett was inducted by Bill “Roto” Reuter, founder and CEO of Roto Speaks and an NCS board member, who noted that Bennett has been referred to by some as the “father of live, virtual and constructive training.”

“I’ve always described my career in two ways: It takes a village, and I’m the quintessential blind squirrel who’s found a few acorns along the way with the help of the folks in that village,” Bennett said.

“I stand before you tonight representing literally hundreds of folks from around the world: industry partners, academic partners, schoolteachers, operational personnel, folks I’ve collaborated with, and the teams I’ve been a part of over the years, which have made my standing before you tonight possible. It’s important to recognize that it takes a lot of people to do what we do – nobody stands alone.”

“M&S is represented by a tightly-knit community of truly dedicated professionals who are always reaching higher and maintaining focus on the community they serve, especially the warfighter,” Wall said. “While Orlando is the epicenter of modeling and simulation, NCS deserves great credit for reaching out and being inclusive of M&S on a national level. NCS is truly committed to extending the benefits of M&S to a diverse user base that goes far beyond the military, while not losing sight of those who serve and defend freedom.”

Read more about Bennett and Wall, and all of the NCS M&S Hall of Fame members.