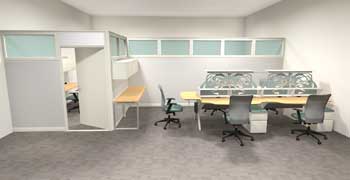 The cubicle. First embraced in the 1960’s as a modern, comfortable alternative to dreary, open offices packed with rows of desks and sneezing coworkers, it slowly became a perpetual object of derision in cartoon strips like Dilbert and movies like Office Space. But love them or hate them, for most of us, the cubicle will probably remain the base for our work efforts—at least for the foreseeable future. 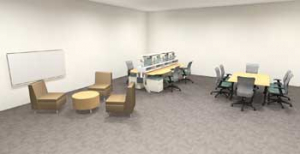 But change has already arrived for some of our teammates. Nearly 60 “cubes” in the de Florez building have already been brought down, or will be biting the dust in the next 30 days or so. And they may be just the first of many to disappear in the coming years.

In initiatives designed to help promote team-building, improve communications, and help speed products to our Warfighters, the Naval Air Warfare Center Training Systems Division (NAWCTSD) has begun two pilot workspace programs. The first will test the possible benefits of so-called collaborative workspaces that will replace some of the cubes that have been home to most of us for decades.

This first program, launched July 27, includes new areas on the second and third floors of the de Florez building now being reconfigured for each of four teams: the F-35 Team; the Interoperability, Design, Engineering & Application (IDEA) Lab; the 7.0 Staff Group, and the Flamingo Works, an area which will be devoted, as needed, to different teams working on accelerated and/or highly specialized projects.

New furniture for these collaborative areas has already arrived, or is on the way. Movement of personnel into the new spaces is planned to begin in mid- to late August and will be completed in September.

The collaborative plan mirrors some of the changes in private industry that have been underway, to one degree or another, for many years. Companies like Apple and Google, for example, have avoided the establishment of “cube farms” and famously provided ground-breaking workspaces for their employees, believing that it makes work more productive—and more enjoyable.

In the second, parallel initiative, NAWCTSD will begin the pilot co-location of selected Integrated Product Teams (IPTs). The first teams will relocate to their new areas beginning later this year. Currently, IPT team members typically remain in their own assigned competencies, and are often stationed on different floors, and at different ends of the de Florez building. Team members use computers, meetings, and the telephone to coordinate their efforts. 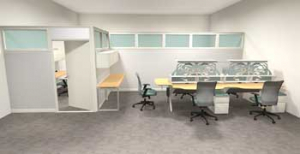 Rendering of another collaborative work area designed for the IDEA Lab. Note the see-through partitions for the workstations, and the closed-off area required for the handling of sensitive or classified information.

This trial will initially move a limited number of IPT team members, consisting of engineers, logisticians, financial specialists, and so on, into one area. This program has a goal similar to the collaborative workspace initiative—to facilitate teamwork, communication, and productivity. Because of budget limitations, standard cubicles already in place will be used for these teams. Although, if future budget allocations allow, collaborative workspace configurations are a possibility.

Officials say that these two innovative changes in workspace design promise to radically change parts of the TSD landscape.
According to Captain Wes Naylor, NAWCTSD’s Commanding Officer, the primary purpose of the pilot programs is to provide developmental teams with a work environment that promotes communication and teamwork. “Almost anywhere you look across the military or private industry spectrum, teams that produce things sit together,” he said. “It just doesn’t make sense from an organizational efficiency standpoint to separate team members. For instance, communication is one of our biggest challenges. We all know it’s easier to get your point across face-to-face, especially if you’re talking about, let’s say, a design issue on a training system that has to be resolved quickly—and requires the expertise of several team members.”

Naylor emphasized that these are pilot programs, being conducted in close cooperation with employees and union officials. “Our objective is to provide our teams with the best possible workplace advantages, and we want to see what works.” he said. “We want teammates to give us their input, their suggestions, and tell us about their experience. These pilot programs are all about enabling our IPTs and other working teams. If something doesn’t work, we can make adjustments and move forward.”

Not all career fields would benefit from collaborative workspaces, something the command recognizes. “This is not a ‘one size fits all’ proposition,” said Naylor. “There are a number of fields that require, or might work best, in partitioned workspaces, like Security or Contracting, for instance.”