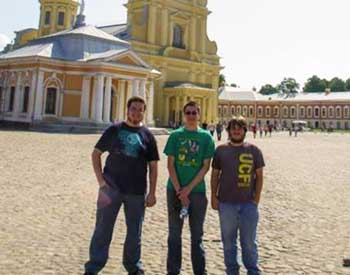 The University of Central Florida’s most-winning competitive team has returned from St. Petersburg, Russia with an impressive ranking: as the world’s 48th best computer programming team.

UCF College of Engineering and Computer Science students Michael Galletti of Orlando, Stephen Royal of Jacksonville and Daniel Wasserman of Ocoee placed seventh among teams from the United States in the World Competition of the Association for Computing Machinery (ACM) International Collegiate Programming Contest.

Also known as “The Battle of the Brains,” the summer competition featured 120 teams that advanced to the world level from a pool of 8,000 regional teams from more than 90 countries.

UCF’s winning record gives the university bragging rights. For 31 years, a UCF team has always placed in the top three in the region.

“UCF’s record is matched by no other school in the southeast region, and our overall performance is matched by very few schools in the world,” said Ali Orooji, a professor and advisor in the UCF Department of Electrical Engineering and Computer Science, and Programming Team faculty advisor.

The contest begins with each team receiving up to 12 problems that draw on skills in math, logic, graphs, charts, geometry and more. Each three-member team shares one computer to solve the most problems in five hours, writing a computer program for each solution. An example problem might ask competitors to route a fire truck across a city to a fire in the quickest time, allotting for complex conditions such as one-way streets and road closures.

The secret to UCF’s success is devoted practice 35 to 40 Saturdays a year. The seven-hour practice sessions simulate the five-hour contest, with the extra time spent on analysis and feedback.

Tryouts for the 2013-14 Programming Team will be Saturday, Aug. 31, starting at 10:30 a.m., in the Engineering II building, Room 102. For more information on the UCF Programming Team, click here.