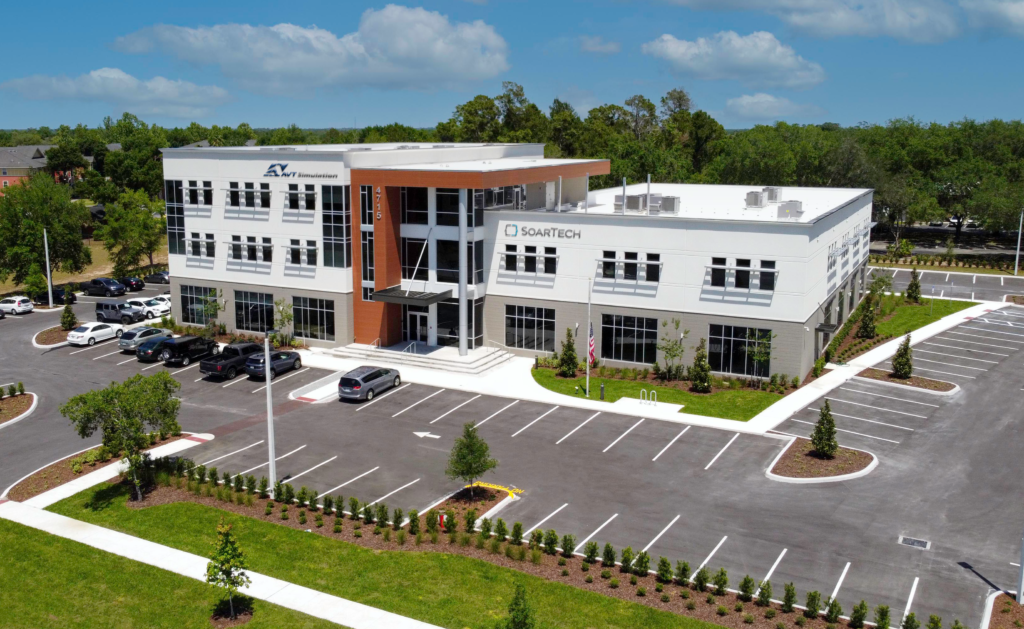 SoarTech is growing quickly in Orlando and will expand into a new office near the
University of Central Florida.

SoarTech, a company that builds intelligent systems for defense, government, and commercial applications, is investing in a new location and expanding its Orlando-based workforce. The company will move into the newly constructed Collaboration building in Quadrangle near the University of Central Florida (UCF) in early 2022. The company is planning to add 26 new, high wage jobs during its expansion over the next three years that will pay over the average wage in Orange County. The company will almost double the square footage of its operations and is investing $1.5 million in its new office and demonstration environment.

“SoarTech is excited to be expanding into the Collaboration building and continuing to build lasting industry partnerships in Orlando,” said Mike van Lent, president and CEO
at SoarTech. “The company has seen incredible success here over the past few years and is well-positioned to take advantage of this opportunity to work more closely with local innovators and tackle challenges in artificial intelligence and adjacent industries.”

SoarTech began operations in 1998 as a spin-off from the Artificial Intelligence Laboratory of the University of Michigan. Its founding team developed TacAir-Soar, an autonomous intelligent agent system that provides realistic behaviors for a wide range of aircraft and missions. When the university research concluded, SoarTech was formed with a contract to support the U.S. Air Force Warfighter Training Laboratory, providing TacAir-Soar for distributed mission training exercises.

The company opened a satellite office in Orlando in 2002 to take advantage of the established Modeling, Simulation, and Training cluster located in Central Florida Research Park and proximity to university research at UCF. The company is planning to expand its Orlando’s footprint and maximize partnership opportunities with the National Center for Simulation and Team Orlando, including the Central Florida Tech Grove. The new office broadens opportunities for SoarTech to collaborate and build relationships in the local simulation ecosystem as well as take advantage of collaboration with Department of Defense simulation command centers based in Central Florida Research Park.

“Orange County is truly an ideal destination for companies like SoarTech,” said Orange County Mayor Jerry L. Demings. “With SoarTech’s proximity to UCF and Central Florida
Research Park, it will be able to easily collaborate with local academia and assist in the further diversification of our economy. We are proud that SoarTech has chosen to
expand here in Orange County.”

SoarTech needed to quickly find and move to a new Orlando office location due to the closing and demolition of its current space for the construction of new student housing at UCF. The Orlando Economic Partnership assisted the company with fast-tracking the company’s permitting process in collaboration with Orange County to get SoarTech into its new office before the closure of its existing space.

“SoarTech is a great example of a growing AI-focused company expanding in Orlando because of its status as the Modeling, Simulation and Training capital of the world,” said Tim Giuliani, president and CEO of the Orlando Economic Partnership. “We are thrilled to congratulate SoarTech on its growth and expansion in our market.”

The company is moving to the newly constructed “Collaboration” building where other local Modeling, Simulation, and Training companies currently have operations, including
Orlando-based AVT Simulation. SoarTech currently employs 49 workers in Orlando and 120 employees nationally.

SoarTech has been awarded various contracts that support activities in the defense and government sector. In April 2021, the company was chosen to support the Defense Advanced Research Projects Agency (DARPA) Air Combat Evolution Program with the development of autonomous behaviors for vehicles flying in air missions. The company’s customer base includes the Air Force Research Laboratory (AFRL), Office of Naval Research (ONR), Army Research Development and Engineering Command (RDEC), Department of Transportation (DOT), and other U.S. agencies.

The company is now hiring and available positions can be found at https://soartech.com/career-opportunities.

About SoarTech
Since 1998, SoarTech has been helping U.S. agencies develop intelligent systems that emulate human decision making in order to enhance user abilities. By studying and modeling many kinds of human behavior, the company creates software that “thinks the way people think”: constantly learning, getting smarter, and adapting new times and situations. Much of this scientific base is encoded within its computational cognitive architecture, which enables the creation of autonomous software agents that can reason over large amounts of human-level knowledge. The end result for users is a system that is not just a tool in their hands, but a thinking partner.

SoarTech is headquartered in Ann Arbor, Michigan and has a satellite office in Orlando. It is an active member in the National Training Systems Association (NTSA) and National Defense Industry Association (NDIA), and actively participates in the Interservice/Industry Training, Simulation & Education Conference (I/ITSEC), and the Behavior Representation in Modeling and Simulation (BRIMS) Conference.

About the Orlando Economic Partnership
The Orlando Economic Partnership (the Partnership) is a public-private, not-for-profit economic and community development organization that works to advance broad-based
prosperity by strengthening Orlando’s economy, amplifying Orlando’s story, championing regional priorities, empowering community leaders and building a brilliant region. These five foundational objectives serve to improve the region’s competitiveness while responding to the needs of communities, residents and businesses.